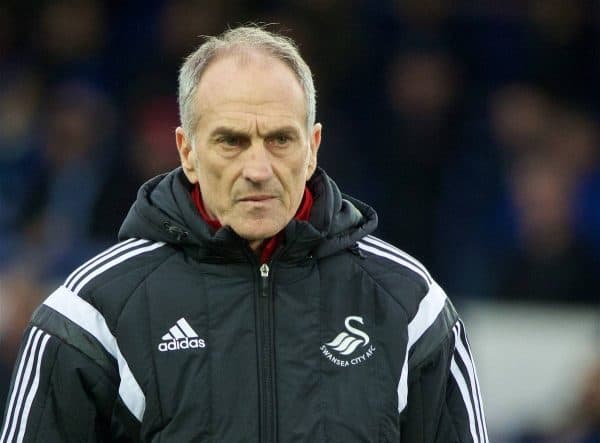 Next up in our preview of the Liverpool’s 2016/17 Premier League opponents are Welsh club Swansea City.

The Swans secured a sixth consecutive season in the top flight after ending last term placed 12th in the Premier League, following a somewhat turbulent campaign which saw them replace Garry Monk as manager—ending with Francesco Guidolin in charge from January.

This summer has been a hectic one, with more outgoings than incomings—though retaining attacking midfielder Gylfi Sigurdsson with a new contract was arguably their most important piece of business.

The club were also part bought by an American consortium, which took on 60 percent of the organisation, with a supporters’ trust retaining around 21 percent.

Having added both Fernando Llorente and Borja Baston to their squad, Swansea are hoping a revamped attack will fire them back toward the top half of the table in what will surely be an enormously competitive season around the middle of the league.

To gain further insight into what lies ahead for Swansea in 2016/17, we spoke with Kevin Elphick of Vital Swansea (@VitalSwansea on Twitter) to gauge levels optimism and expectation.

First off, what are your thoughts on the upcoming season as a whole for Swansea, is there optimism that improvements have been made in the right areas?

The fans are mixed so far this summer, some have been happy with our transfer business, despite losing two key players in Ashley Williams and Andre Ayew, while others are concerned about a lack of depth still within the squad.

One major positive though is the fact that we’ll have two strong strikers, again—some are upbeat that our Spanish striker duo Fernando Llorente and Borja Baston can do the business, while others aren’t convinced—but anything’s better than Bafetimbi Gomis!

In defence, Williams leaves a big gap and we’ll need to add a fourth centre-half and I’d like to think we’ll bring one in before the end of the month. But despite losing the two players, I’m quietly confident we can have a decent season in and around mid-table after a full pre-season under Francesco Guidolin.

What about the manager, what’s your take on him so far?

Some fans haven’t taken to him, for whatever reason the jury is still out, but he did what was asked of him last season and that was to keep us up. Maybe the style of football didn’t go down well but he simply did what was needed to avoid the drop.

Nobody would have predicted that we’d end up in 12th after being in the bottom five for most of the year. In the last few games, we saw a glimpse of the style of football that we can expect this season: a quicker attacking style and playing on the front foot.

With his experience and tactical sense, I expect we’ll do OK under the Italian.

Selling Andre Ayew for £20.5 million—happy with it, or would you have preferred to keep him?

Ayew never really fit into our team. He unbalanced the side as a winger, always cutting inside and taking up Sigurdsson’s space, leaving the full-back exposed and lacking support.

He was far more influential as a striker for us, proving to be a clinical finisher, scoring six in seven games under Guidolin despite it not being his preferred position—so we’ve lost a proven Premier League goalscorer.

When you consider other transfers this summer, £20.5 million is probably a good deal for West Ham, we’ve just got to hope now that Llorente and Borja can get into double figures.

Let’s talk Liverpool: which players do you fear most?

Philippe Coutinho and Daniel Sturridge have always been a handful for us, while Sadio Mane is a good signing.

But with Sturridge’s constant injury problems, I still think they need another striker as Christian Benteke doesn’t seem to fit in at Anfield.

When Liverpool play there: October 1

Away fans’ pub: The Landore Social Club is always welcome to away fans, “offering good food and cheap beer, whilst some away fans tend to have a drink outside the Harvester near the stadium,” says Elphick.

Kevin’s advice: “Just don’t act like an idiot and you should see the whole game!”

Who Kevin predicts to win the Premier League Manchester City