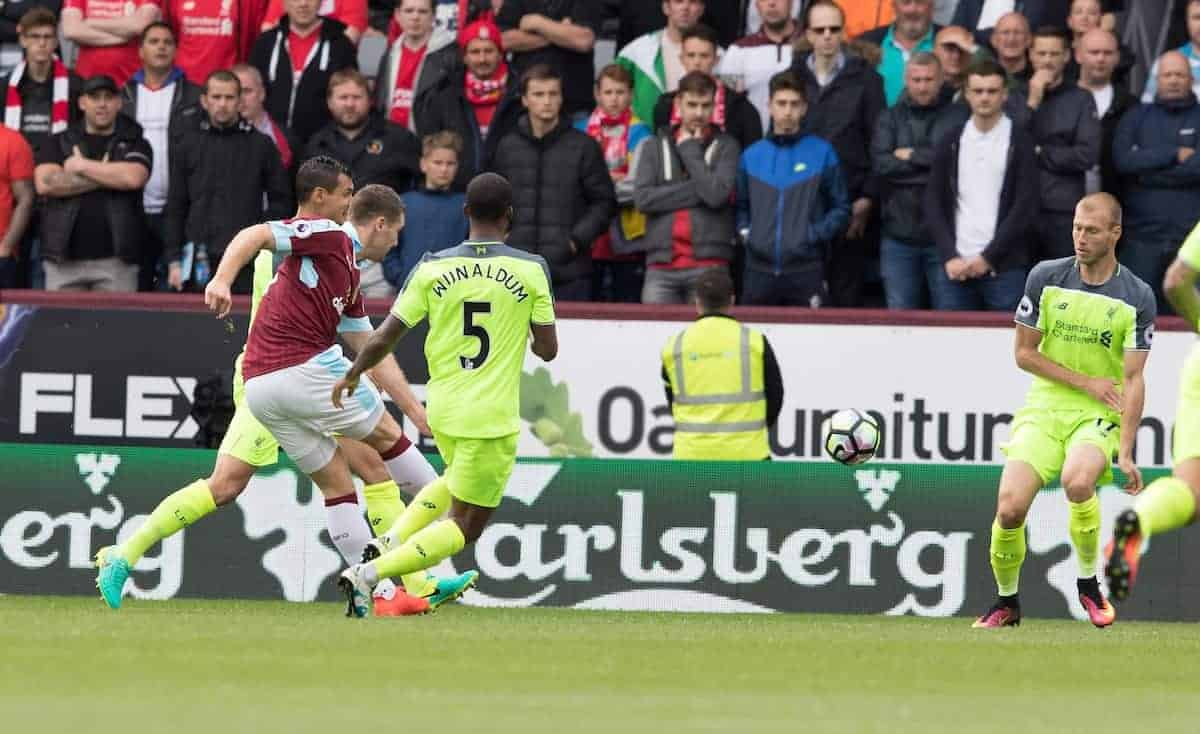 Liverpool succumbed to a hugely disappointing 2-0 defeat at Burnley on Saturday afternoon, as the Reds’ woes against lesser sides continue.

Liverpool arrived at Turf Moor still buzzing after last Sunday’s 4-3 win at Arsenal, as Jurgen Klopp‘s men looked to make it two wins out of two to start their 2016/17 Premier League campaign.

Klopp made two changes to the team that was victorious at the Emirates, with James Milner and Daniel Sturridge coming into the team.

Despite having his manager’s support this week, Alberto Moreno was relegated to the bench in place of Milner – the Englishman is now seen as a left-back by Klopp – while Sturridge came in for the injured Sadio Mane.

The Englishman was used in Mane’s right-sided role, with Roberto Firmino continuing to lead the line, as was the case against Arsenal. Jordan Henderson and Georginio Wijnaldum were again paired in midfield.

The likes of Joel Matip, Emre Can and Divock Origi were all named on the substitutes’ bench, outlining the new-found depth within this Reds squad.

It was a disastrous start to the game by Liverpool, unfortunately, as Nathaniel Clyne‘s slack loss of possession allowed Sam Vokes to rifle an effort past Simon Mignolet. Minutes later, Andre Gray raced through, and only Dejan Lovren‘s last-ditch challenge prevented it from being 2-0. Like the Arsenal game, it was a horribly slow start by the Reds.

Barring a couple of long-range efforts from Philippe Coutinho, there was very little to shout about in the first 20 minutes.

Adam Lallana scuffed an effort into the grateful hands of Tom Heaton midway through the first-half, but Burnley continued to look well-drilled and comfortable, despite Liverpool’s dominance.

In the 37th minute, Burnley‘s lead was doubled, with yet more poor defending. Henderson and Klavan both missed tackles as the Clarets counter-attacked, and Gray eventually fired into the bottom corner.

Clyne tried to pull a goal back shortly after, but shot straight at Heaton, while Coutinho again shot wastefully over the bar.

It was a poor first-half performance, and as was the case last weekend, enormous improvement were needed in the second-half. Klopp made no changes at the interval – a surprise, given his side’s struggles in the opening 45 minutes.

Coutinho shot straight at Heaton shortly after the restart, while an excellent long-range effort from the disappointing Firmino forced the Burnley goalkeeper into a good stop.

Sturridge then missed the target from inside the penalty area, as Liverpool desperately tried to respond early in the second-half. Yet again, Coutinho tried his luck and fired wide.

In the 64th minute, Origi was introduced for Sturridge, as Klopp looked for more pace and power in his attack. There was simply no sign of a goal coming.

The match completely petered out, with Liverpool having virtually all of the ball but doing nothing with it.

Substitute Marko Grujic tested Heaton from 20 yards, but it really was only long shots – a ridiculous amount of them – that the Reds could muster.

This brought back horrible memories of defeats at the likes of Watford and West Ham last season, and it is an issue that must go away.

Klopp deserves plenty of criticism for his team selection, and the lethargy displayed in his players.