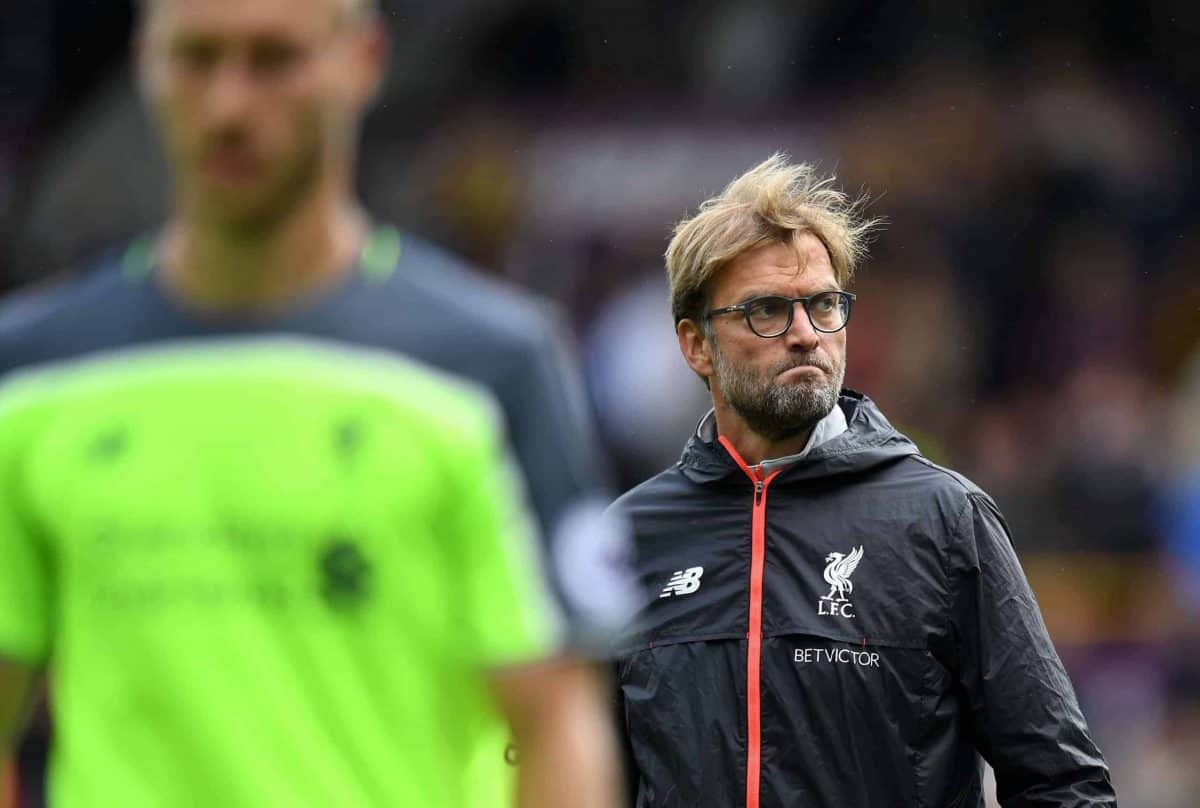 A woeful Liverpool were beaten 2-0 at Burnley on Saturday afternoon. We assess the performance of each Reds player at Turf Moor.

The Belgian was once again beaten by the first shot on target, and the second in fact, but he could do nothing about either.

It was an otherwise quiet afternoon for him, with Burnley happy to defend for large periods.

Clyne is usually Liverpool’s Mr. Consistent , but this was a dreadful day at the office.

His horribly slack pass allowed Sam Vokes to give Burnley the lead inside two minutes, and he failed to offer the attacking spark he did at Arsenal last week.

If this had been Alberto Moreno, he’d have been crucified, with some clueless work at both ends of the pitch.

Lovren, like rest of his defence, had a poor afternoon and struggled with the pace of Andre Gray. Not the worst of the back four mind you.

Having looked a strong presence in Liverpool’s back-line for much of the game against Arsenal, Klavan’s shortcomings were highlighted at Turf Moor.

Twice he failed to make relatively simple tackles in the lead-up to Gray’s goal, and much like Clyne, he didn’t fill you with any confidence throughout the game.

He should be a back-up player moving forward, and was given a torrid afternoon by Gray.

The 30-year-old came in for Moreno at left-back, and while his usual effort levels and industry were there for all to see, he just didn’t look comfortable in the role.

He had to cut inside onto his right foot time and time again, making Liverpool far too narrow and predictable. His lack of pace and end product was also an issue.

Milner did little wrong, but a left footed player is needed at left-back.

Liverpool’s captain has to start going up a gear, especially in games like these. This was an afternoon that further raised question marks over his long-term future in the side.

He looked nervous every time he was hassled on the ball, losing it on a number of occasions, and he lacked guile in the middle of the park.

Not a holding midfielder, one of many being played out of position in this game.

After becoming increasingly influential against Arsenal, Wijnaldum was a completely passive presence in the Reds midfield.

Too often he opted for the easy ball, and he was one of many to lose possession cheaply. The match completely passed him by, and it’s hard to remember a less effective performance by a Reds midfielder.

Newcastle fans warned of away performances like this from the Dutchman. Not convinced he’s a central midfielder, with the player himself, every Newcastle fan, and Rafa Benitez all saying his best position is at No.10.

Of all Liverpool’s players, Lallana looked the most likely to make something happen against Sean Dyche’s well-drilled outfit.

The 28-year-old produced some lovely turns in the first-half, and offered plenty of link-up play and clever movement.

His detractors will say that a lack of end product was evident, though, and it’s hard to argue. Didn’t do enough as the match progressed.

Having been Liverpool’s talisman and match-winner at the Emirates last weekend, the Brazilian was a hugely frustrating figure this time around.

The 24-year-old tried his luck with distance at least seven times, missing the target on almost every occasion. He also over-hit several passes.

Coutinho needs to be consistent this season, if he is to go up a significant gear.

Firmino is a fantastic footballer, but when he has an off day, he looks woeful. Unfortunately, Saturday was one of those days.

The forward was horribly wasteful on the ball, with numerous attacks breaking down around him, and his lack of pace proved to be an issue against a stubborn Clarets team. Utilised in the right-sided role Roy Hodgson played him in during Euro 2016, Sturridge couldn’t really get into the game at any point.

He looked cultured on the ball, as is always the case, but he didn’t penetrate the Burnley defence, and was a little too easy to defend against.

Played completely out of position.

Barring one burst down the left, Origi made little impact.

Like Milner, his final ball failed to beat the first man a number of times.

Tested Tom Heaton almost immediately after coming on, but was otherwise quiet.

This was arguably Klopp’s worst game as Liverpool manager to date, and despite his undoubted brilliance, he deserves huge criticism.

His team selection was all wrong, with Milner and Sturridge played completely out of position.

Waited far too long to make changes, and deployed a midfield that is far too weak for games like these. A 4-2-3-1 with Sturridge actually in his best position up front and Firmino in at No.10 behind, would have been better for attack and defence.

Days like these prove that Klopp is still very much learning the ropes in English football.

Still, he can’t be blamed for individual mistakes yet again.