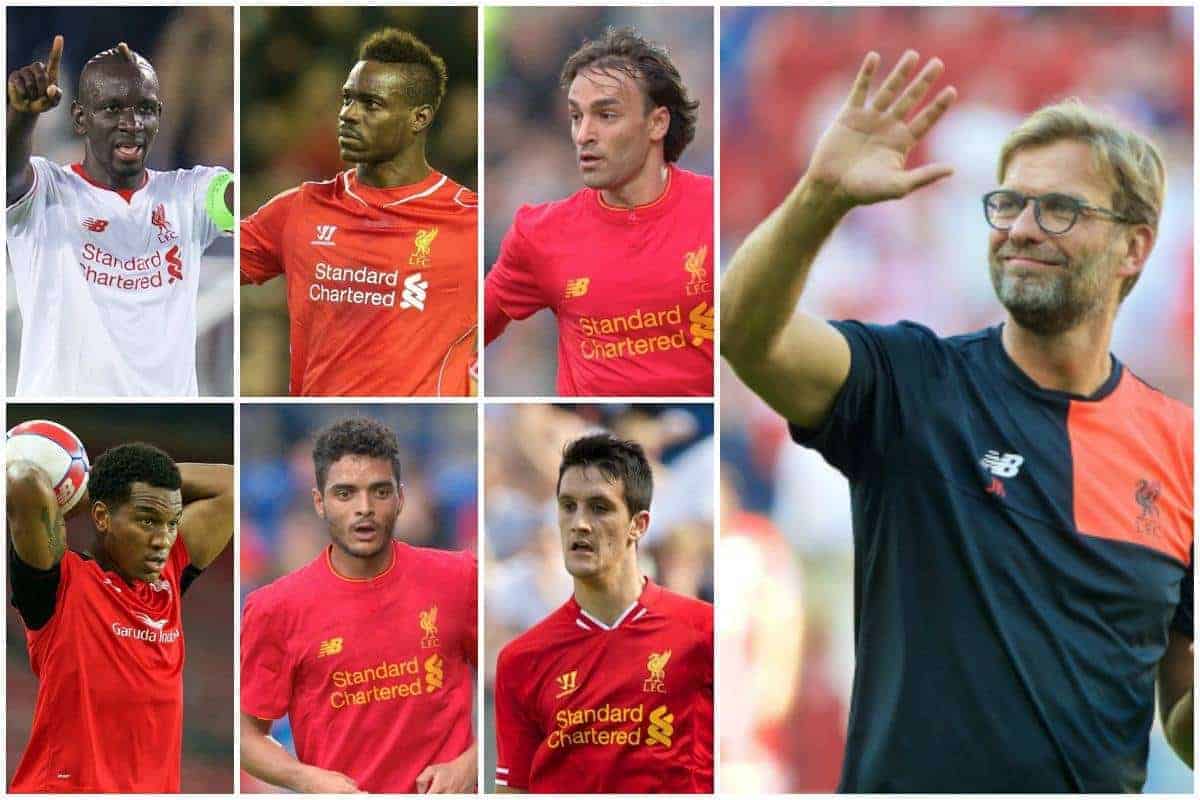 With the summer transfer window closing at 11pm tonight, here’s what remaining business to expect from Liverpool on deadline day.

Jurgen Klopp has already overseen an overhaul of his squad in recent months, with most of his business done early – especially on incoming players. Liverpool’s last signing, Georginio Wijnaldum, was completed almost six weeks ago, on July 22nd.

But there is still business heading out of Anfield, with up to six potential departures on deadline day.

Here we round up what can be expected from Liverpool today. Despite this, there is reason for concern with Klopp’s squad, namely for the absence of a top-level left-back and cover at the base of the midfield.

But the 49-year-old does not see it this way, with James Milner his choice at left-back and the likes of Emre Can, Jordan Henderson and Lucas Leiva trusted as holding midfielders.

Klopp has repeatedly stressed he is not in the market for a new signing in either position, and with Liverpool’s £11 million bid for Christian Pulisic last week rejected by Borussia Dortmund, don’t expect any new signings today.

Sakho to Leave on Loan

Klopp’s decision to make Mamadou Sakho available on loan in the final weeks on the transfer window was met with frustrating from Liverpool supporters.

But the manager’s mind is made up, with reports on Tuesday confirming the Frenchman will not play any part in the Reds’ 2016/17 campaign, despite already turning down Stoke City and West Bromwich Albion. Sunderland are reportedly interested.

Whether the official line that Klopp is looking for Sakho to prove himself on loan before returning to a first-team role at Liverpool is genuine is questionable.

But one thing is certain, Sakho will be pushed towards finding a loan club before 11pm – and if the player somehow stands firm, it will be interesting to see how the situation develops.

Signed for £16 million from AC Milan in 2014, Mario Balotelli was described as a “calculated gamble” by then-manager Brendan Rodgers.

Unfortunately, this risk failed to pay off, and two years and one failed loan spell later, Balotelli is on the verge of leaving the Reds for another season.

Whether he will depart on a permanent deal or another loan is unclear, but Ligue 1 side OGC Nice have emerged as favourites to sign the striker.

Remarkably, Liverpool are reportedly not set to subsidise the 26-year-old’s £90,000-a-week wage if he makes the move to France – whether that’s true or not, it seems hard to believe.

Another attacker who returned to Melwood this summer to find himself surplus to requirements was Lazar Markovic, despite the winger reporting back early in a bid to impress Klopp.

Markovic is currently on international duty with Serbia, but could make a trip away from their training camp to seal a move out of Liverpool.

Sporting CP were said to have offered £16 million earlier in the summer, but Markovic turned down a return to Portugal, while Milan, Schalke 04 and Newcastle United have been rumoured to be interested.

A loan switch is most likely, though where Markovic will end up is up for debate at this stage. Spanish midfielder Luis Alberto has barely had time to settle on Merseyside since his £6.8 million move from Sevilla in 2013.

The 23-year-old, has spent the past two seasons on loan with Malaga and Deportivo de La Coruna respectively, but is now poised to leave Liverpool on a permanent basis.

The Reds have accepted a deal worth up to £6 million from Lazio for Alberto, with the playmaker travelling to Rome to discuss personal terms.

This is unlikely to prove too complicated, and Alberto should be confirmed today.

Signing a new four-year deal with Liverpool before heading out on loan with Norwich City last summer, Andre Wisdom found himself in a difficult position ahead of 2016/17.

Not in Klopp’s long-term plans, but with a value that likely deterred potential buyers, Wisdom has been forced to settle for a fourth consecutive loan.

This time, Wisdom will join Austrian side Red Bull Salzburg, with the Reds accepting the Bundesliga champions’ offer on Monday.

Wisdom is expected to sign a season-long deal with Oscar Garcia Junyent’s side today, despite previously reported interest from Rodgers’ Celtic.

Ilori to be Touted Around

Like Balotelli, Wisdom, Markovic and Alberto, Tiago Ilori has been widely tipped to leave Liverpool before tonight’s deadline.

But unlike his team-mates, no deal is seemingly even close to completion, though Olympiakos, Eintracht Frankfurt, Freiburg and Granada are all reportedly interested.

Ilori travelled with the Reds for last weekend’s 1-1 draw with Tottenham Hotspur, and has trained with Klopp’s squad at Melwood this week, so could end up staying.

The 23-year-old will be touted out to clubs around Europe today, with Liverpool looking for around £3 million.

Speaking after the Liverpool U23s’ 3-1 win away to Arsenal on Friday night, academy manager Michael Beale admitted more of his players could leave on loan before 11pm tonight.

“If it’s the right loan then it will happen,” he explained.

“If Jurgen wants them to stay here then that will be the best thing for them because he will use them and they will be around the first team squad.”

Connor Randall and Cameron Brannagan are two players likely to leave for developmental spells, while moves for Jordan Williams, Joe Maguire and Tom Brewitt can’t be ruled out just yet.