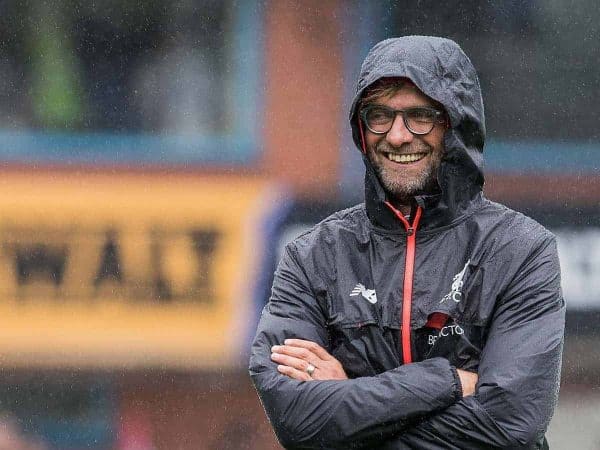 Jurgen Klopp “will make changes” for Burton Albion tie, but not “seven or eight”

Jurgen Klopp has suggested he will only make a handful of changes for Tuesday night’s League Cup clash with Burton Albion.

Liverpool enter the League Cup in the second round, and will travel to the Pirelli Stadium on Tuesday to take on Nigel Clough’s Brewers.

Burton are newly promoted to the Championship, and have begun their campaign positively, sealing a win and a draw from their opening four games, leaving them four places from the relegation zone.

With the Reds having suffered a 2-0 defeat to Burnley last time out in the Premier League, Klopp will be looking for his side to bounce back against Burton.

Therefore, the German has stressed that while he “will make changes” to his starting lineup, supporters should not expect “seven or eight.”

Two players who could expect to feature in Staffordshire are strikers Danny Ings and Divock Origi, but Klopp remained coy as to whether either would start, as they battle for full fitness.

Ings is still recovering from a nightmare ACL injury, despite making his return against West Bromwich Albion in the league in May, while Klopp suggested Origi is yet to find his “rhythm” after a summer spent with Belgium at the European Championship in France.

Nevertheless, both will be hopeful of game time, along with the likes of Trent Alexander-Arnold, Joel Matip, Kevin Stewart, Cameron Brannagan, Marko Grujic, Lazar Markovic and Ben Woodburn.

In terms of injuries, Klopp suggested little had changed from the weekend, with only 87 hours between the two fixtures.

“No injuries. Little issues, if you want,” he told reporters at Melwood on Monday afternoon.

“I could name a few names, but they can still play. I haven’t made a final decision.

“I’d say everyone who was available last week is available, maybe a few more. A few [more] like Lucas [Leiva], but we should not force it.”

Lucas is likely to miss out, along with Loris Karius (hand), Mamadou Sakho (heel), Joe Gomez (heel) and Sheyi Ojo (back).

It remains doubtful that Sadio Mane would be risked despite taking to Instagram on Sunday to provide a positive update on his shoulder injury.

However, Ovie Ejaria, another young talent who shone during pre-season, could take part after returning to training following a disappointing groin injury.