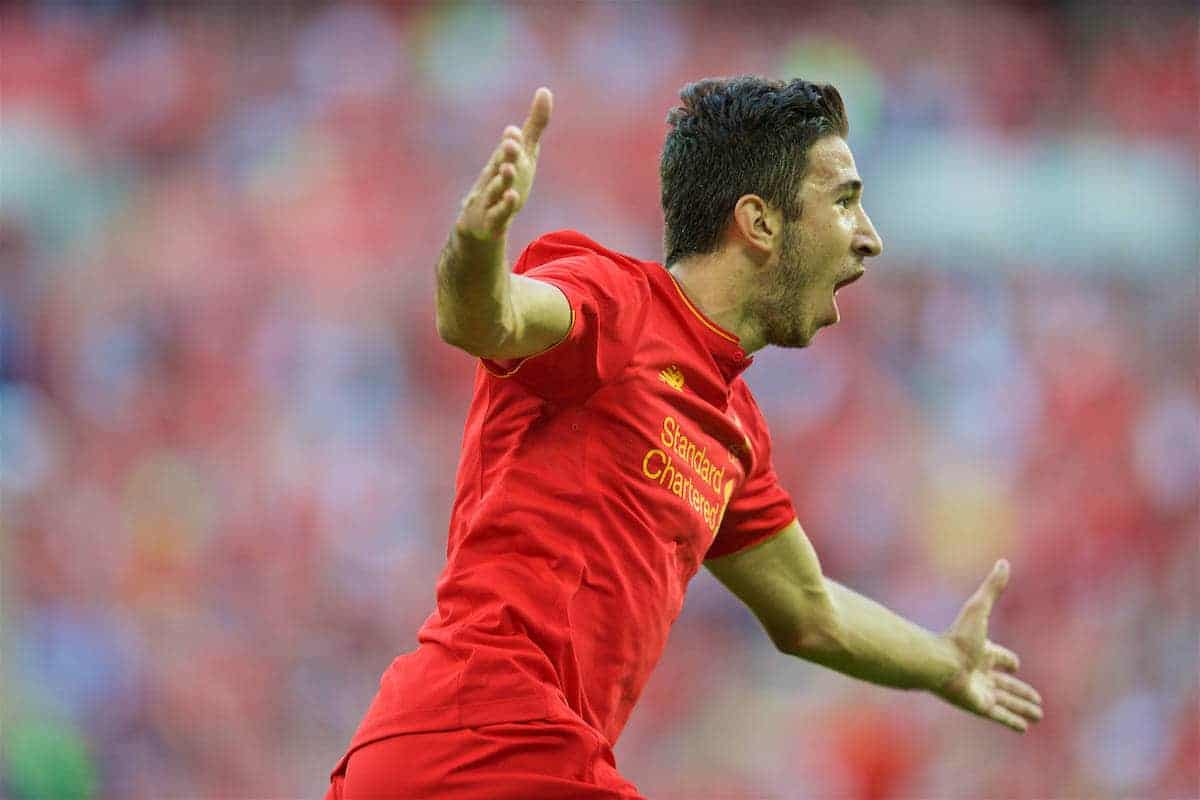 James Nalton made the trip down to Wembley to see Liverpool make light work of one of the best teams in Europe. Made first-half saves from Arda Turan and Luis Suarez, the latter an impressive rebuttal with a strong left hand when the Uruguayan looked certain to score.

There was the usual uncertainty when the ball was at his feet, but when it came to preventing the ball from going into the net, he did the job.

Should have done better when put through by Can in the opening five minutes. He found himself in a dangerous position but the cross was far too high.

Sometimes out of position in defence, but always recovered well. That said, the gaps between himself and Dejan Lovren will need to be closed before the season starts.

Made a good intervention to prevent Suarez from getting a clear shot on goal near the end of the first half.

Was too eager to step out on other occasions, twice being pulled up for leaving his foot in on the striker.

Defended well when it came to the nitty gritty of blocks and headers, with one notable stop which prevented an almost certain goal from Lionel Messi in the second half.

His positioning needs work, however, as he often lost touch with the team-mates either side of him.

Goals aside, his clearance into row Z in the first half brought one of the biggest cheers of the game.

However, to paint him merely as a no-nonsense defender would be doing him a disservice: he’s calm on the ball and decent enough with his weaker right foot too.

Despite being a new signing, he looks the most settled of the defenders in the side.

Liverpool’s captain and left-back had the task of marking Lionel Messi, and was embarrassed by him on one occasion as he was left sprawling on the floor as the Argentine passed him by.

He was withdrawn on 42 minutes having picked up a slight injury, and didn’t want to risk playing on further.

He failed to make a real impact on the game in attack, and looked uncomfortable in defence.

Controlling when the side had the ball, but a bit off the pace without it.

Lost track of Messi when the Argentine hit the post in the first half, but losing track of Messi is something which you can’t criticise a player too harshly for!

Looks like a force to be reckoned with when driving forward on the counter attack, but his final pass isn’t always there.

Regularly advances from his position in midfield to join the attack, and will have been disappointed not to receive the ball more often in the final third.

Started the move which led to Sadio Mane‘s goal, before arriving on the edge of the box to get the assist. Showed some neat touches and good interplay with Roberto Firmino.

Harried the opposition when the side was out of position, and prevented the ball getting to Messi on several occasions. In possession he looked to work the ball into the final third.

Direct from the start, regularly taking on his man on the right and looking to create chances inside.

Not afraid to drift infield to take up a more central position when Firmino dropped deep, and it was this type of movement which saw him get on the end of Lallana’s pass for the opening goal.

He was a constant menace to the Barcelona defence, and it was his un-defendable cross which saw former Reds midfielder Javier Mascherano direct the ball into his own net.

Curled a left-footed shot wide with 20 minutes remaining when he should really have laid it off to Wijnaldum, but his confidence was so high he believed he could score his second goal.

Linked the play well from his position leading the line. He often dropped deep to get more involved and he was part of many of the attacking moves despite not getting a goal or an assist.

He should have scored, however, when he found himself with just the Claudio Bravo to beat, but his curled his shot wide as he tried to find the far corner.

His touch was sloppy and his dribbling was loose but he came to life towards the end of the first half, beating two Bercelona players before sending his shot over the bar.

It was a mixed bag from Coutinho, and as a player who’s often been linked with today’s opposition, Liverpool might be able to hold onto him for another season if they judge him on today’s game! Made one of his madcap passes to the opposition within minutes of entering the pitch, but settled into the game as much as it’s possible for Alberto Moreno to settle into a game.

The first of three half-time substitutes who contributed almost immediately after coming on. He burst into the box causing problems for Mascherano as a Mane cross came into the six-yard box.

The ball was eventually bundled into the net off the Barcelona man, but Henderson’s presence made it happen.

Played two sublime through balls in the opening 10 minutes of the second half.

The first became the assist for Origi’s goal, and the second should have been another assist as his first-time, left-footed pass had Firmino one-on-one with the ‘keeper, but the Brazilian shot wide.

Made an instant impact after entering the field for the second half. His inventive flick played in Mane, whose cross led to the second goal, and he then latched onto Stewart through ball, cooly slotting the ball under Bravo for Liverpool’s third.

Looks like the only like-for-like replacement for Mane, and if Klopp wants to stick with the same system regardless of personnel, then the much-maligned Markovic could find himself with a role in the squad.

Played a good chipped cross to Grujic for the goal in the final minutes.

Replaced Wijnaldum as the most advanced of the midfielders, and slotted in comfortably.

Scored his side’s fourth and final goal with a looping header over Bravo after making a good run into the box from midfield.

Came on to play the role of left forward and as a result he struggled to really get into the game. Tracked back well to help Moreno. Treated the game as an intense training session, as he looked to get all his players on the same page and working to his plan.

Regularly shouted at his players from the touchline, and used a total of seven substitutions despite there being a game against Mainz tomorrow.

His 4-3-3 formation looks like it’s set to be the one used against Arsenal in the opening game of the season, and on this evidence the players are beginning to work comfortably within it.