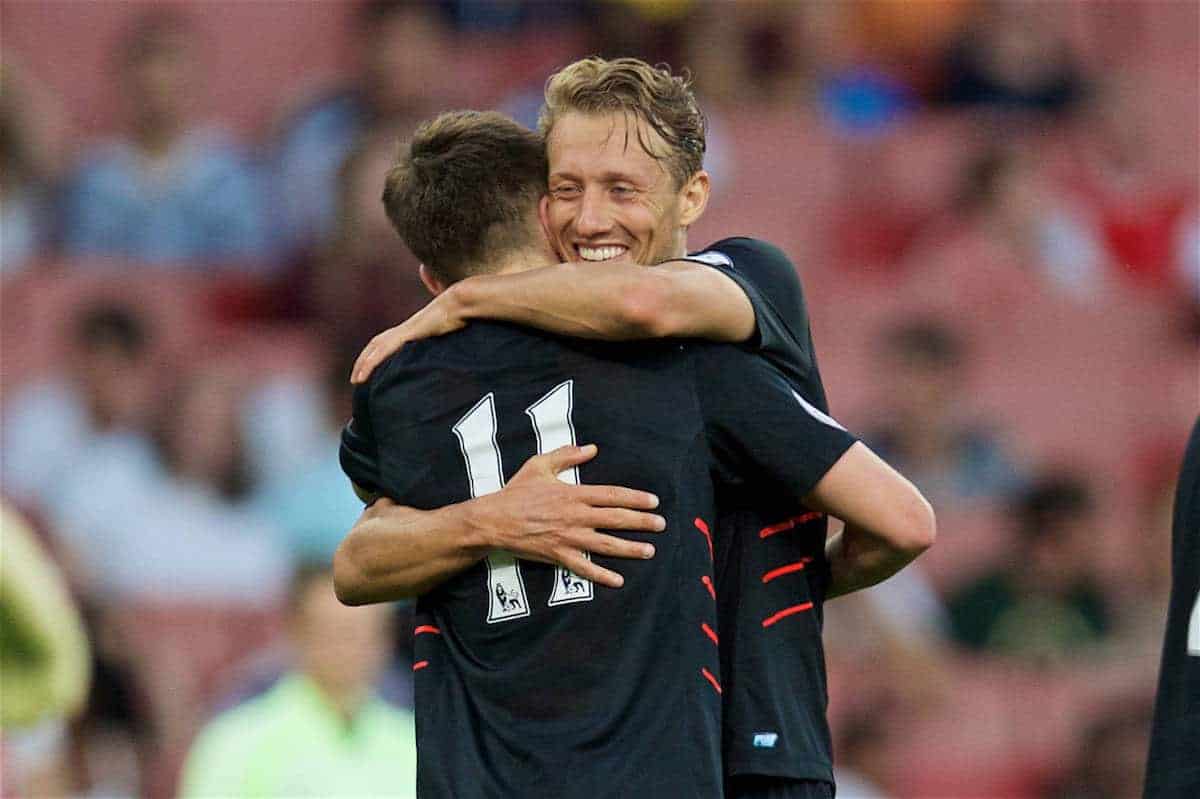 Liverpool midfielder Lucas Leiva made his first appearance back following a hamstring injury as the Reds’ U23s earned a 3-1 win over Arsenal.

The Brazilian pulled up during July’s 2-0 pre-season win away to Huddersfield Town, replaced by goalkeeper Shamal George, who made his Reds debut up front.

This saw Lucas sidelined for a month, missing the start of the 2016/17 campaign, but he rejoined first-team training last week.

As Michael Beale prepared his side for their trip to the Emirates Stadium, Lucas was among the familiar names available, with Liverpool fielding a strong starting lineup.

Caoimhin Kelleher took up his position between the sticks, behind a back four of Trent Alexander-Arnold, Connor Randall, Andre Wisdom and Lucas.

Steve Gatting named hotly tipped trio Jeff Reine-Adelaide, Chris Willock and Chuba Akpom in his young Gunners lineup, but they took on a determined and experienced Liverpool side. Lucas was the most high-profile name in Beale’s matchday squad, but it was Woodburn who shone throughout the first half at the Emirates.

The young forward, who served up a series of impressive performances for Jurgen Klopp‘s first team throughout pre-season, got the ball rolling in the opening stages with the first goal on 15 minutes.

With Lucas threading an excellent pass through the midfield and into attack on the counter, Wilson laid the ball into Woodburn, who showed his composure in striking it past Matt Macey to make it 1-0.

Wilson had gone close to netting minutes earlier, with Liverpool dominating for much of the first half at the Emirates.

Woodburn made it 2-0 shortly before half-time with an excellent strike, powering Gomes’ cutback past Macey and into the top corner, ensuring the U23s went into the interval with a comfortable lead.

Beale took this impetus and withdrew Lucas at the break, with Joe Maguire coming on to partner Wisdom at centre-back. The Reds’ intensity dropped at the beginning of the second half, to the disappointment of Beale, with Willock going close with a volleyed effort just after the hour mark, though Wisdom was on hand to make the clearance.

Arsenal had clawed one goal back minutes later, however, and it was Akpom who managed to beat Kelleher from close range, finding the back of the net via the crossbar.

But Liverpool had soon restored their lead, as Gomes slotted home with less than 30 minutes to play in north London, with Brannagan, Maguire and Williams all involved in the buildup.

This sealed the Reds’ first victory of the Premier League 2 season, and with Lucas enjoying valuable game time as he steps up his recovery, it can be considered a hugely positive night on the whole.