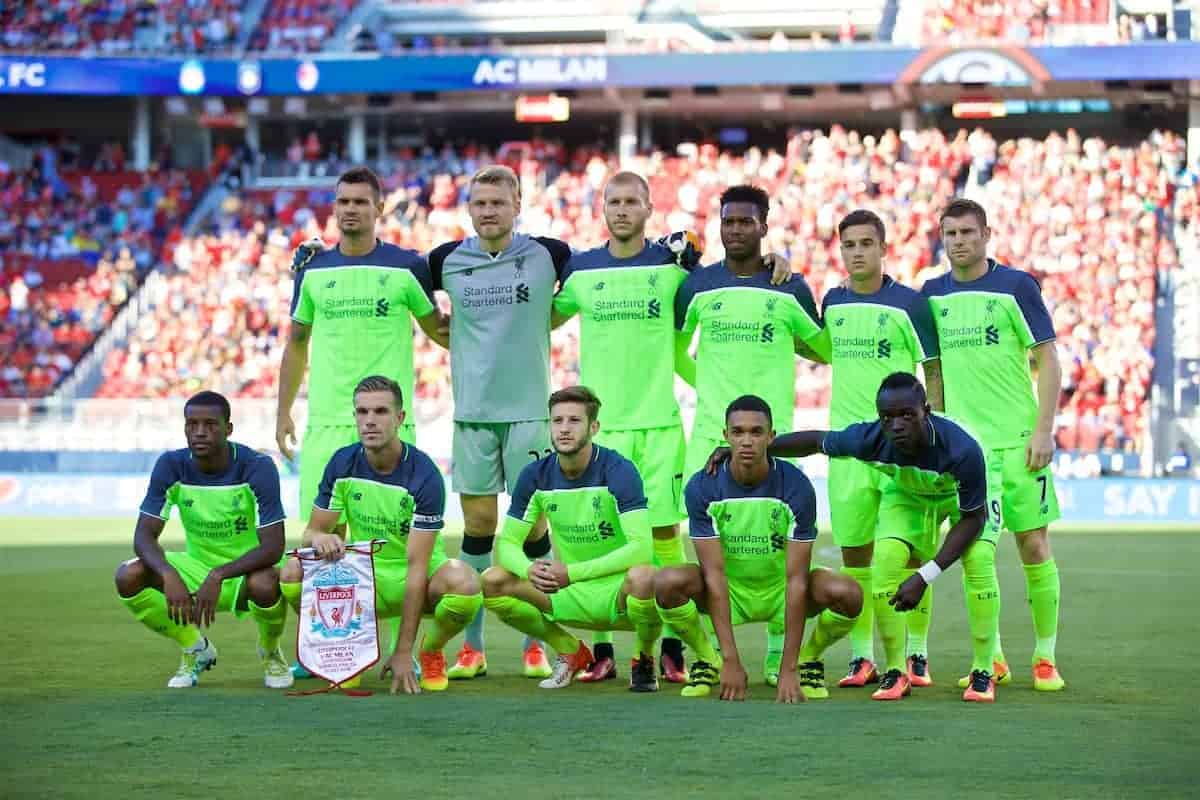 Jurgen Klopp’s Reds take a break from International Champions Cup exploits as they face the Italian side Roma in St Louis, Missouri.

The pre-season games continue to come thick and fast for Liverpool, who play their third game of an intense six days just 44 hours after beating AC Milan.

The match is the final fixture of the Reds’ hectic US tour, with Liverpool returning home for two final warmup clashes, first against Barcelona at Wembley, before rounding off preparations in Germany against Mainz 05. Competitive meetings have been few and far between recently—the last coming in 2002 Champions League.

But the clubs meet for the fourth friendly game since that occasion, with this the third time in five pre-seasons that the teams face off for a non-competitive showdown.

The first friendly came 12 years ago in the ‘Champions World Series’ tournament, when the Reds claimed a 2-1 win at the Giants Stadium in New Jersey courtesy of goals from Djibril Cisse and Michael Owen.

But more recently, Liverpool have played and lost twice to Roma on recent US tours.

The first of those in summer 2012 saw a 2-1 loss on Liverpool’s first visit to Fenway Park, before going down 1-0 two years later at the same venue after Marco Borriello’s late winner. Having faced off twice at the spectacular venue, it will be the picturesque Busch Stadium—home of MLB side St Louis Cardinals—that hosts Klopp’s team.

The Reds will look to mark their first ever game at the impressive 46,800 venue—which hosts just its fifth football match—with a better result than the last two.

Klopp named a strong squad and starting lineup against Milan, and with pre-season games running out, the Reds boss is likely to do the same in St Louis.

However, with games in such close proximity, the German is likely to rotate the group at his disposal, having made changes at half-time and given certain players hour-long runouts as preparations step up.

This could see Emre Can and Christian Benteke—the only Reds outfielders not to have featured yet this pre-season—come in for their first action with the Premier League kickoff drawing in.

The likes of Nathaniel Clyne, Alberto Moreno, Lazar Markovic, Roberto Firmino and Divock Origi, who all began as substitutes against Milan, will be hopeful of starting berths and increased minutes.

Meanwhile, Klopp has already confirmed that Danny Ings will take part after watching the 2-0 Milan win as an unused substitute.

There is less flexibility for the Reds boss over his goalkeeper rotation, with Loris Karius’ broken hand meaning Simon Mignolet is set to continue, leaving Alex Manninger hopeful of a Reds debut.

Options also remain limited at centre-back, where Dejan Lovren and Ragnar Klavan are set to resume with Joel Matip unlikely to feature due to injury, and Joe Gomez and Lucas Leiva still out.

Exciting talent Ovie Ejaria missed the Milan game due to a minor injury, and is unlikely to return in time to take on Roma, but Marko Grujic should be cleared to return.

Fellow youngster, Sheyi Ojo, will hope for another chance to impress after a bright cameo display, as will the likes of Trent Alexander-Arnold, Connor Randall and Cameron Brannagan.

? Here's our full schedule for the 2016-17 season. Which games are you looking forward to?

Roma have enjoyed consistently strong Serie A campaigns in recent years, even though overcoming Juventus’ dominance has proved a task too far.

The Romans—trophyless since winning the 2008 Coppa Italia—are back under Luciano Spalletti’s stewardship, with the manager returning six-and-a-half years after his first spell ended.

Taking over in January, the Italian guided Roma to a strong second half of the season and third-placed finish, which he will hope to build on this year.

Spalletti has been busy in the transfer market as he reshapes his squad for the looming campaign, adding nine players to his ranks this summer.

Germany defender Antonio Rudiger has joined the club permanently from Stuttgart, as has Stephane El Shaarawy, from Liverpool’s last opponents, for £13 million. Pre-season has been relatively undemanding for Roma in comparison to Liverpool, with Spalletti’s side to play only four friendlies—partly down to their impending Champions League qualifying campaign.

The Giallorossi have won both of their games so far—beating FC Terek Grozny 3-2 after starting their warm-up schedule with a monstrous 16-0 hammering of local side Pinzolo Campiglio.

However, Roma haven’t had a friendly for two weeks since beating Russian outfit Grozny on July 17.

Spalletti’s men will therefore be fresh for the game and will provide Klopp’s side with another thorough pre-season workout.

Liverpool vs. Roma will be shown live on LFCTV, and as usual, This is Anfield will provide coverage of the clash, with kickoff at Busch Stadium set for 1:35am (BST).