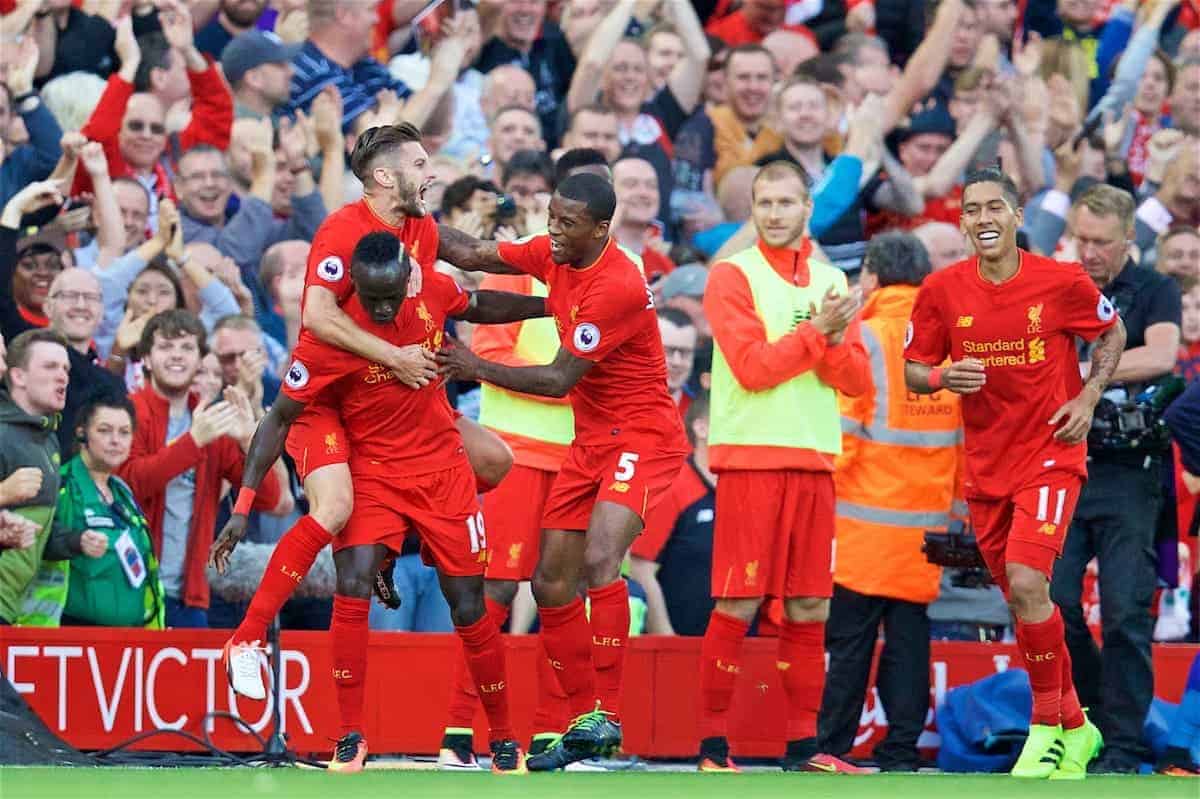 Liverpool marked the opening of the new Anfield with the 4-1 demolition Leicester City, in a game which provided plenty of positive talking points.

The Reds produced some dazzling attacking play to overcome their recurring defensive deficiencies and comfortably see off Claudio Ranieri’s champions.

Roberto Firmino opened the scoring in front of Anfield’s biggest crowd since May 1977 with a fine finish after 13 minutes, before Sadio Mane doubled the lead a minute after the half-hour mark.

Jamie Vardy capitalised on Lucas Leiva‘s dreadful error to score the easiest goal of his career and half the deficit, but Adam Lallana’s second-half rocket restored Liverpool’s two-goal lead, before Firmino’s second sealed a thoroughly deserved victory for Klopp’s men.

A big day at Anfield, Liverpool rose to the occasion to claim their first win since the opening day of the season, and here are five talking points from the impressive victory.

Spectacular Attack, Concern at the Back It may have been the beginning of a new era at Anfield, but it was a story of the same old as the Reds blitzed their opponents at one end but were unconvincing at the other.

In attack, Liverpool ripped through the visitors time and again with some devastating attacking play that provided the catalyst for some superb goals being scored, with three of the orchestrators in Lallana, Firmino and Mane all among the goals.

Their movement, fluidity, pace and creativity proved too much to cope with for Leicester’s defence, who must have departed the Anfield surface feeling dizzy from the darting runs and countless reverse passes and flicks that cut through them all afternoon.

But while the forward play was mesmerising, defensive lapses caused concern throughout once again, with the back line—primarily the erratic left side of Lucas and James Milner—allowing the visitors routes back in to the game—literally in the case with the Brazilian’s howler for Vardy’s goal.

There was also heart-in-mouth moments with the inability to deal with balls swung into the box from set-pieces and long throws, from which Robert Huth hit the bar at 2-1—which could have ended in a far different story had it dropped in.

Widely acknowledged as a clever, gifted player, Reds fans have long waited for Lallana to use his undeniable talents to become an influential figure in the team through more goals and assists.

The 28-year-old has answered those calls by hitting the ground running in his new midfield role this season, and his influence proved game-changing again at Anfield, where he notched a stunning goal and produced a fantastic all-round display.

A constant source of energy and invention, Lallana was often the architect behind Liverpool’s slick, dissecting attacking moves as he carried the ball, took players on and provided a platform for quick exchanges to break through Leicester’s defence.

A fantastic goal of his own—an absolute thunderbolt into the top corner in front of the Kop—capped off a selfless and impactful performance from the ex-Southampton player.

Lallana has become a key component of Klopp’s Liverpool, and it’s plain to see why when he’s in the kind of form. Very little could dampen the buzz on a historic day at Anfield, but seeing the makeshift defence facing the champions brought a more cautious mood to a memorable occasion.

A back four featuring two midfielders in Milner and Lucas alongside Joel Matip—who made just his second league appearance—leaving Nathaniel Clyne as the only regular, would certainly not have been the ideal rearguard selection on the day for the boss.

With Dejan Lovren injured and Ragnar Klavan only fit enough for the bench, the unfamiliar quartet must be credited for coming through with a 4-1 win to show and doing an adequate job to nullify the away side’s threat despite sloppy moments, but that such a makeshift unit has to be deployed is a real problem.

Concern has long been expressed with the lack of defensive depth—and more importantly, quality—and those fears won’t have been eased after this latest showing, which has left many hoping Mamadou Sakho’s situation and struggle for fitness can be resolved to offer Klopp a much-needed specialist centre-back.

This would certainly improve defensive issues to an extent—providing a stable option at the heart of defence, which will in turn aid Milner—and with the issues proving costly with the amount of goals being conceded, it must be sorted before it proves derailing to the season.

Liverpool’s captain has found himself adapting to a new role following Klopp’s change to a 4-3-3, and after a slow transition, Jordan Henderson showed positive signs of progress with an impressive display.

The natural box-to-box midfielder turned in an impressively disciplined performance before moving into a more familiar role upon Kevin Stewart’s introduction, demonstrating clear forward steps with his awareness to developing danger and vision and execution with his passing from deep.

Henderson won three tackles and completed an impressive 95 percent of his passes on the day—two of which played a crucial role in goals for Mane and Firmino.

Speaking in the buildup to the game on his new position, Henderson said he had learned “a lot in a very short space of time,” before adding “I feel I have progressed in that position and I feel comfortable there.”

Liverpool’s on-pitch leader certainly gave a clear demonstration of that progress with a real positive display against the champions. Anticipation gripped Anfield as the Reds kicked off a new era in front of the spectacular new Main Stand, and Klopp’s side didn’t disappoint—matching a historic occasion with a dominant team performance.

“We have to use the quality of the players, the power of the club and the power of our supporters and then it can work,” Klopp stated this week, and the German’s orders were carried out as his side produced a display fitting of the occasion to claim a fantastic three points.

Klopp’s side put their visitors to the sword as they looked to use the power and extra atmosphere provided by 8,500 more Reds fans to their advantage, and they did just that as the champions were overawed by the increased power of an Anfield in fine voice.

Home form will be crucial as Klopp’s side search for a strong league campaign, and the imposing new stand adding to Anfield’s power will be vital to helping the historic stadium become a place where three points are routinely won.

‘If we do this every week, it will work.” Klopp said. This was the perfect start.