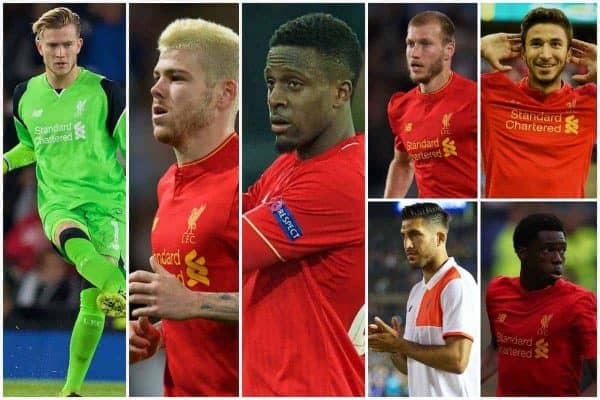 Jurgen Klopp rang the changes in Liverpool’s 3-0 win over Derby County on Tuesday evening, as the Reds progressed to the League Cup fourth round with ease.

In total, there were seven alterations to the team that beat Chelsea 2-1 last Friday, as goals from Ragnar Klavan, Philippe Coutinho and Divock Origi saw Liverpool cruise to victory at Pride Park.

Loris Karius made his competitive debut in place of Simon Mignolet, while Klavan and Alberto Moreno came in for defensive duo Dejan Lovren and James Milner.

Marko Grujic earned his first start, joined in midfield by Lucas Leiva and Jordan Henderson, while Sadio Mane and Daniel Sturridge made way for Origi and the fit-again Roberto Firmino.

It was a night that saw fringe players stake a claim and debutants perform well.

Karius finally made his Liverpool bow on Tuesday, after a lengthy spell on the sidelines with a broken hand.

From the off, there was a slickness and confidence to the way in which he used the ball—it always felt as though he had his next pass mapped out long before playing it.

One risky chip outlined his confidence in his own penalty area, and while it may have felt a little needless, there was not the same fear of dread that can surround Mignolet.

Having barely been called upon in the first half, the 23-year-old did excellently to come off his line and deny Darren Bent just before half-time, sparing Henderson’s blushes in the process.

It was reward for taking up such an aggressive starting position—something he did all evening.

Karius was again a spectator for much of the second half, although it would be wrong not to single out a clear error that came his way.

Having dealt well with one corner, punching the ball to safety, he then got nowhere near one shortly after, and was fortunate to see Richard Keogh’s header drift wide.

Had it been Mignolet, supporters would have voiced their displeasure, and it is important Karius was criticised in a similar manner.

All in all it was a strong debut, but bigger tests will come his way. He simply looks the part, though, and it would be a surprise if he isn’t first choice very soon.

After such a poor showing at Arsenal on the opening weekend of the season, Moreno had barely had a look in prior to Tuesday’s game.

He was given a shot at redemption against Derby, however, and should feel happy with his performance against Nigel Pearson’s side.

It is easy to forget what an asset the 24-year-old’s blistering pace can be, and his fitness is also something that can go unfairly under the radar.

Moreno consistently offered a threat down the left flank, making intelligent runs and freeing up space for the left-sided Firmino, and his use of the ball was also thoughtful.

Most importantly, Moreno avoided the lapses in concentration that have plagued his Reds career to date, barring his booking for dissent—it should be stressed that Derby were lifeless going forward, however, and rarely tested his defensive resolve.

In certain games, namely against weaker opposition, his speed can be a real weapon, and he offers something completely different to Milner.

Like Karius, there will be better opportunities to judge Moreno this season, but he acquitted himself well at Pride Park.

Origi has found himself behind Firmino and Sturridge in the striker’s pecking order this season, and several performances from the bench have lacked a spark.

He was given the chance to lead the line against Derby, and while it wasn’t exactly a display of earth-shattering brilliance, 90 minutes on the field will have done him the world of good.

Two stinging first-half shots forced the impressive Jonathan Mitchell into smart saves, and he linked up nicely with Coutinho and Firmino in a devilish Reds front three.

One run at the Derby defence looked likely to end in a goal for either himself or a team-mate, but Origi was a little ponderous, and got the ball stuck under his feet.

It was a moment that highlighted a lingering lack of confidence in Origi’s game, with a few rusty touches and slack moments of decision-making also letting him down—but in the second half he got the goal he sorely craved.

Coutinho found the Belgian in space on the right-hand side of the penalty area, following some clever movement, and he lashed an inch-perfect effort past Mitchell at the near post.

It was hugely reminiscent of his goal at Southampton in last season’s League Cup, in which he scored a hat-trick in Liverpool’s eventual 6-1 win.

The hope is that his strike at Derby has a similar impact on his self-belief.

In a defensive sense, Klavan was barely tested at any point, looking an experienced head alongside the potentially erratic Moreno.

It was at the other end of the pitch that the Estonian stood out, however, as he put Liverpool 1-0 up from close range—his first goal for the club, since a £4.2 million move from Augsburg in July.

Centre-backs with goals in them are something the Reds have lacked hugely in recent years, so seeing Klavan find the net was an added bonus on an easy night for him.

It was a memorable occasion for Grujic, who was handed his first Liverpool start by Klopp.

The young Serb was solid, if a little unspectacular, going about his box-to-box duties with a blend of efficient passing and dynamism.

With Lucas sitting deep, he was given the chance to roam a little, and he didn’t look remotely out of place alongside more illustrious team-mates.

The fact that Grujic is very much a squad member currently goes to show what depth the Reds now possess in the middle of the park.

Emre Can‘s pleasing return from injury saw him come on for Henderson with 56 minutes on the clock.

The 22-year-old looked understandably rusty, having not featured since the 5-0 win over Burton Albion in the second round, but did curl one decent effort wide.

With the game effectively over by the time he came on, this was more do with fitness than anything, as Liverpool’s midfield general continues his recovery.

Danny Ings received a wonderful ovation from the travelling supporters when he was introduced in the second half at Pride Park.

Having suffered so cruelly with a serious ACL injury, and not featuring at all this season prior to Tuesday, this was a good run-out for the 24-year-old.

Ings looked sharp off the ball, and was perhaps unfortunate not to earn a penalty after going to ground late on.

The former Burnley striker feels like a player worth persisting with, and while his first-team chances may remain limited, he can be very effective off the bench.

On an immensely proud occasion, Ovie Ejaria entered the fray with 13 minutes remaining, replacing Firmino to make his Liverpool debut.

Although the 18-year-old academy player had little time to make an impact, the fact that he has made the squad against both Chelsea and Derby suggests Klopp sees something special in him.

Witnessing his progress from this point on will be fascinating, and U23s manager Michael Beale told This is Anfield that “opportunities will come” for the midfielder.