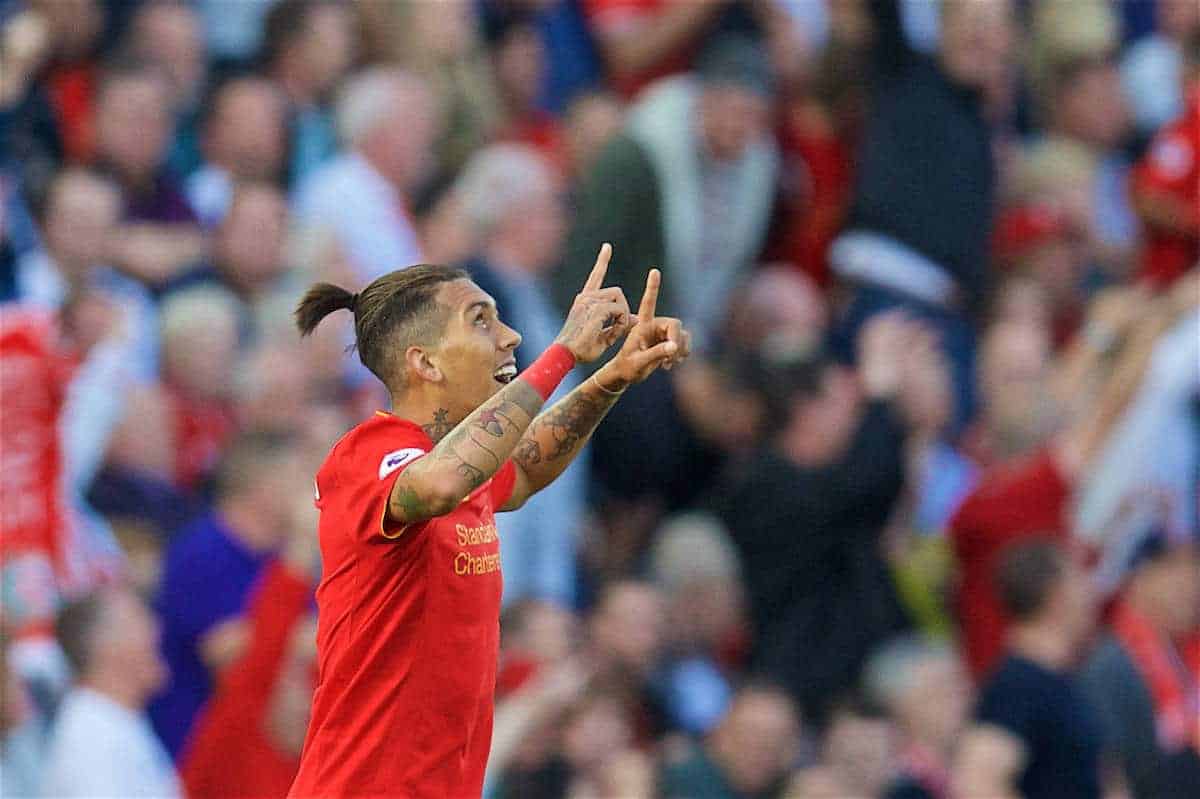 Liverpool’s attack put in a performance as impressive as their new Main Stand, scoring four goals against champions Leicester City in front of 53,075 spectators. With Loris Karius back in training and sat on the bench, this was an important game for the Belgian stopper.

However, his performance didn’t tell us anything we don’t already know, even though it wasn’t a bad display from the goalkeeper who’s provided good enough backup while the No. 1 has been out.

He flapped at a long throw in the first half, and was lucky that Robert Huth’s header only hit the top of the bar.

He made one important save in the second though, when an error in midfield let Vardy in on goal. He came out to block the well-hit shot, and got enough on it for the ball to bounce clear of danger.

The bloody nose he suffered at the hands, or more accurately the head, of Huth wasted some time while his team were ahead. Copy and paste from his last game…

Seriously though, Clyne provides a consistent outlet in both defence and attack, and looks to be gaining an understanding with Matip on the right side of the defence.

Often one of the furthest forward, he also has the engine and pace to get back into the defensive line.

The towering presence Liverpool needed at the back, Matip looks like he should win lots of headers, but he rarely has to do so.

Looks like he could have a mistake in him, but also looks like he wouldn’t let it bother him too much.

Steps out well with the ball and positions himself well in defence. One of the few Liverpool defenders who performs to a good level regardless of who’s alongside him.

Was looking steady for much of the first half, showing the range of passing you might expect from a midfielder playing at centre-back, and not looking too troubled by the opposition.

Then it went wrong. Having received a short pass from Mignolet in one of those increasingly annoying play-it-out-from-the-back moments, a heavy touch meant he lost possession, then toe-poking across goal for Vardy to score from close range.

He looked uncomfortable from the rest of the half and at one point he was challenging Matip for an aerial ball.

Recovered somewhat in the second to make at least one crucial interception as the opposition attacked, but will be hoping for a more assured display next time he plays in this position. Milner is often criticised for only using his right foot from the left-back position, but it was his perfect right-footed through ball which sent Roberto Firmino through for the opening goal.

The left-sided pairing with Lucas looks like two players not used to some of the defensive side of the game, especially when it comes to positioning, but they did a decent enough job to get the three points today.

Played an excellent pass to Daniel Sturridge which led to the second goal. He received the ball from Roberto Firmino and pinged it first time into his team-mate’s path.

Drew enthusiastic praise from his manager as he got stuck into the opposition, and for the first time this season he looked in control of his area of the pitch.

As captain he encourages players rather than dishing out rollockings, but he may get one from his manager after skying a shot into the Kop when he should have scored.

Repeated his pass of the first half towards the end of the game with a long ball through to Mane which led to the fourth goal. A captain’s knock. Looks like he now has a role in the team, even if he isn’t quite excelling in it yet.

Worked hard defensively, using his frame to keep the opposition away from the ball, and had a couple of shots from distance himself.

Can be sloppy at times, and lost the ball in the second half giving Leicester a chance to score. Luckily, he was bailed out by Mignolet.

Went on to lay on the pass for Adam Lallana‘s goal, and continued to battle in midfield until he was brought off in the second half.

Great turn and pass to play Sturridge in during the first half, but he really came into life in the second and had Anfield chanting his name.

He ran onto Wijnaldum’s layoff to score his side’s important third goal, hitting the ball convincingly into the top corner from just outside the area on the right. It was another extremely productive display from the wide forward as he managed to get his name on the scoresheet, provide an assist, and contribute on both sides of the ball.

He was in the right place to poke Sturridge’s backheel over the goalkeeper, and he kept his head late on in the game to set up Firmino with Kasper Schmeichel out of his goal.

Probably one of the most effective new signings of recent times, considering how quickly he’s become one of the best players in the team.

Playing in his preferred role as a centre-forward, it was an impressive display from the No. 15.

Made a great run which was vital to the opening goal, dragging the Leicester defence to give Firmino a clear run through the middle.

Was involved again for the second with a flamboyant right-footed backheel to set up Mane.

His movement caused problems for the Leicester defence all game, and while he missed a couple of chances to score himself, it was a real team performance from the striker. Drew appreciation from the crowd early on in the game when he controlled the ball with one perfect touch as it dropped from the sky.

Moments later he was cutting in from the left, getting on the end of Milner’s through ball to slide the ball past Schmeichel. He took one touch with his left foot to wrong-foot the defender, and a second with his right score.

Calmly finished with his left foot in the dying minutes when Leicester were all at sea. It looked easy but the chance still needed putting away. Philippe Coutinho (on for Sturridge, 76′) – 6 – Within seconds of coming on he was trying one of his fabled shots from distance to no avail, but he provided a quality option on the left when it came to keeping the ball and evading the opposition who were desperate to get back into the game.

Kevin Stewart (on for Wijnaldum 76′) – 6 – Took up a defensive-midfield role, allowing Henderson to move forward. Had a couple of dodgy moments on the ball but always recovered.

Alberto Moreno (on for Mane 93′) – N/A – Replaced Mane on the right wing in the last minutes of the game.

In terms of team selection, there weren’t many things you’d have expected the manager to do differently.

Coutinho started the game on the bench, and Lucas came in at centre-back due to an injury to Dejan Lovren and a presumable lack of match fitness from the recently injured Ragnar Klavan.

Wijnaldum and Henderson seem more comfortable and sure of their roles, while Sturridge got his wish to play through the middle; Firmino played to the left of him in what could be his most effective role.

The side play the ball out from the goalkeeper a little too often, especially when that ‘keeper is Mignolet, but apart from this the style of play was one you’d expect, and hope, to see from a Klopp team.

They were relentless in their running, and the hardworking attackers were rewarded with four goals.