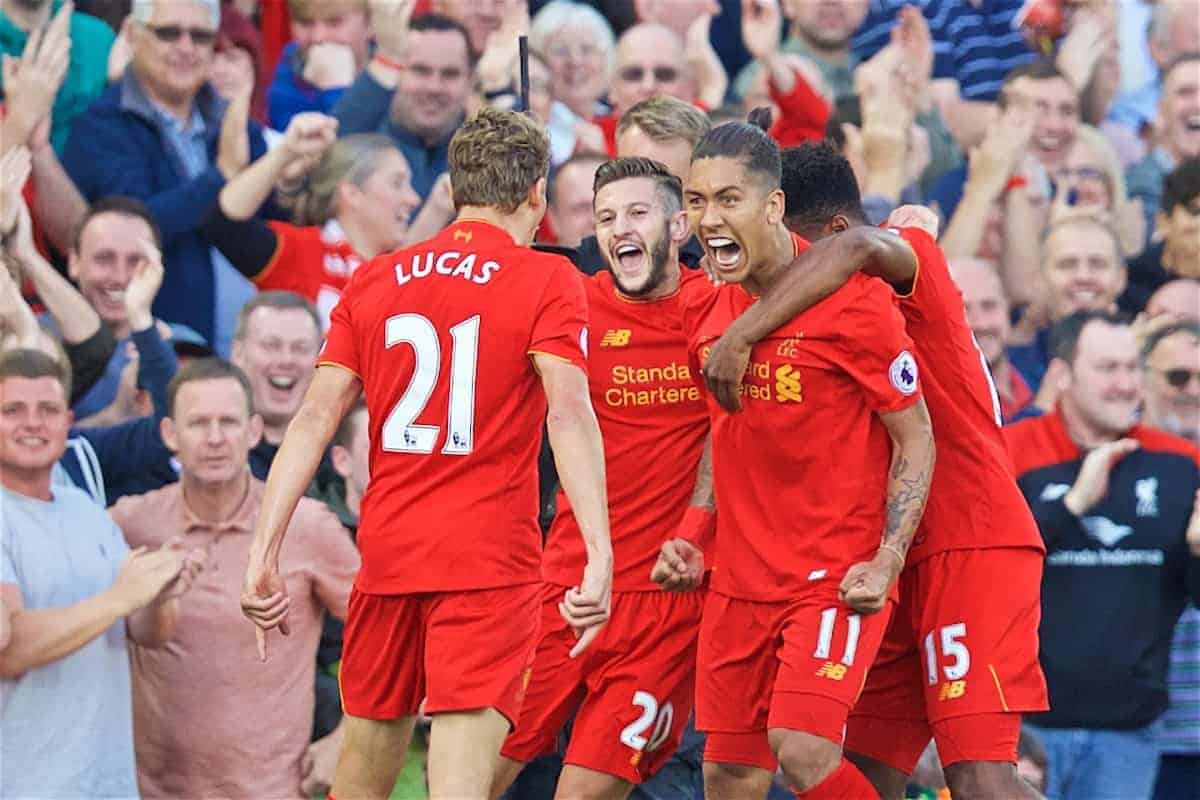 Liverpool secured a 4-1 win at home to Leicester City on Saturday evening, as Anfield opened its doors for the first time in 2016/17.

The Reds took to Anfield for the first time since May, following the expansion of the Main Stand over the summer, playing three away fixtures before Saturday’s clash with the Foxes.

Starting the weekend level on points with Claudio Ranieri’s side, Liverpool will have been desperate to secure a win.

Jurgen Klopp had his hands tied in terms of his team selection, however, with Dejan Lovren out with an eye injury and Philippe Coutinho returning to first-team training late after international duty with Brazil.

Nevertheless, Klopp’s starting lineup was still strong, with Simon Mignolet in goal behind a back four of Nathaniel Clyne, Joel Matip, Lucas Leiva and James Milner.

Jordan Henderson, Georginio Wijnaldum and Adam Lallana made up the midfield, while Daniel Sturridge was supported by Roberto Firmino and Sadio Mane in attack.

After 122 days away from Anfield, expectations were high, and the Reds matched these emphatically. The Reds started the game on the back foot, with Leicester beginning with a high intensity, looking to send direct balls over the top for Shinji Okazaki and Jamie Vardy in attack.

But Liverpool soon grew into the game, with Sturridge looking to impress as the central striker, combining with Firmino and Lallana in a dangerous move before the 10-minute mark, with Wes Morgan needing to make a vital intervention.

It wasn’t long before Firmino had found the opener, however, turning the Leicester defence to latch onto Milner’s pass and fire beyond Kasper Schmeichel to make it 1-0.

Liverpool kept the pressure on following Firmino’s goal, with Wijnaldum curling a dangerous effort from range on 22 minutes.

Sturridge almost made it 2-0 shortly after, following an excellent overlap from Mane, but Schmeichel was there to make the stop at the near post.

The No. 15 did craft Liverpool’s second just after the hour mark however, laying the ball into the path of Mane after a sensational through ball from Henderson, with the Senegalese lifting the ball past Schmeichel to extend the lead.

For all Liverpool’s attacking brilliance, however, the defence did their best to undermine this, with Mignolet and Lucas’ miserable mistake leading to a simple goal from Vardy on 38 minutes, leaving the scores at 2-1 at half-time.

Ranieri made a change to his attacking line for the second half, with Ahmed Musa coming on to replace Okazaki, and the Foxes looked to utilise the summer signing’s pace to trouble the Liverpool defence.

It was a Reds attacker who got the first goal of the second half, however, with Lallana powering an excellent strike into the top corner as Klopp’s side imposed themselves once again.

With Mignolet keeping Vardy at bay at the opposite end, Liverpool moved to stifle any Leicester momentum, passing the ball around with composure—with the Foxes needing to fight back for any chance of a result.

This saw Leicester resort to deliveries from out wide, but the likes of Matip and Clyne were able to hold firm.

Liverpool could have made it 4-1 with just over 10 minutes to play, with Firmino and Lallana interchanging to set up Henderson on the edge of the box, but the midfielder blazed over from 16 yards.

But the captain made amends with an inch-perfect pass to set Mane through just after, with the winger beating the onrushing Schmeichel and playing Firmino through for a tap-in.

That put the icing on the cake, and as Craig Pawson blew for the final whistle the biggest Anfield crowd since 1977 could be pleased with what they had seen.