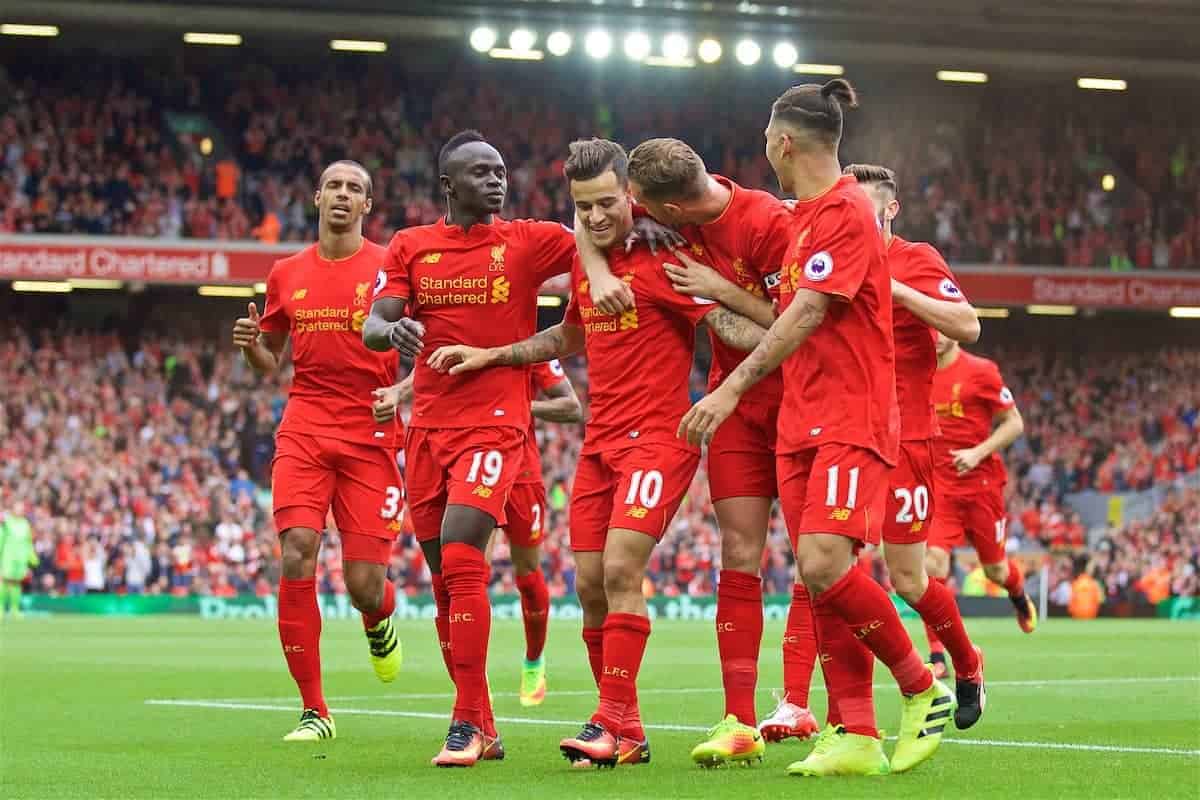 James Milner, Adam Lallana and Philippe Coutinho were the stars of the show as Liverpool sealed a 5-1 win over Hull City on Saturday.

Making his Premier League debut after an impressive showing away to Derby County in midweek, Karius had the quietest opening 45 minutes that he is likely to have in a Liverpool shirt, with Hull failing to have a single shot on goal.

Karius will be disappointed, however, to concede David Meyler’s goal early on after the interval, but the German could have done little to stop the midfielder’s powerful effort.

Compared to his omnipresent full-back counterpart, Clyne produced a relatively quiet performance on the right defensive flank at Anfield.

As ever, he was solid defensively, and dutifully pushed forward to support attacks, continuing his run of consistent form in the No. 2 shirt.

Matip’s performances since coming into the Liverpool side this season have proved to be a revelation, and the Cameroonian continued this with an assured showing on his second Anfield outing.

Dominant in the air and strong on the ground, Matip was once again impressive at centre-back—and given Mamadou Sakho’s social-media transgression in the early hours of the morning, this is hugely encouraging.

Drafted into Klopp’s starting lineup following illness to Dejan Lovren, Klavan impressed in a largely composed display at the heart of the defence, slightly outperforming his partner.

The Estonian made a number of vital interventions and, crucially, provided an incisive passing outlet from the back, threading balls out into midfield quickly and efficiently to maintain momentum. Milner’s rebranding as Liverpool’s first-choice left-back this season has so far gone without a hitch, but speaking ahead of the game, Jamie Carragher suggested his performance against lesser opposition such as Hull would provide a more useful yardstick when analysing his all-round game.

The vice-captain responded emphatically, providing an invaluable presence charging forward down the left flank, giving Coutinho license to drop inside and influence play.

He took his two goals with consummate ease, dispatching a pair of penalties beyond Scotland international David Marshall, continuing his remarkable run of never losing in any of the 43 Premier League games he has scored in so far.

Henderson was another player in Carragher’s spotlight before the game, with the ex-Reds centre-back commending his resurgence in form following a campaign hampered with injury in 2015/16.

While Milner, Lallana and Coutinho will take much of the plaudits for Liverpool’s dominance in the final third, Henderson pushing his side forward from his role at the base of Klopp’s midfield was key, penning Hull into their own half and allowing the Reds to apply pressure.

With Henderson providing stability in his deep-lying role in Liverpool’s three-man midfield, Lallana was once again given license to prove forward as Klopp’s central attacking presence behind Roberto Firmino.

This paid off, with the No. 20 scoring the opener, before providing assists for both Coutinho and Sadio Mane, with his awareness and incision in the final third key to breaking Hull down.

Serving as the selfless foil to Lallana’s attacking flair, Wijnaldum performed with a relentless energy, winning the ball back quickly and ensuring lost causes were resurrected time and time again.

He’s still yet to score his first Liverpool goal, but Wijnaldum is proving just as important as his more adventurous midfield colleague. The Senegalese performance at Anfield was one of growing familiarity to Reds supporters, with his pace, trickery and powerful shooting power troubling the Hull defence throughout. With Lallana pushing forward alongside Mane and Firmino, Klopp seemingly altered Coutinho’s duties for Saturday’s clash, with the Brazilian dropping into a deeper role in the Liverpool midfield.

This saw him run the show as the Reds’ primary creative outlet, assisting Lallana’s opener and setting the tempo throughout, with his astonishing long-range strike on 52 minutes the icing on the cake, killing off any chance of a Hull comeback.

Replacing Divock Origi and restored in his role as Liverpool’s centre-forward at Anfield, Firmino did everything but register a goal or assist.

His selfless off-ball movement in the buildup to Lallana’s opener was characteristic of a performance of subtle excellence, and served as evidence as to why he is often preferred to Sturridge and Origi. Daniel Sturridge (on for Lallana, 68′) – 7 – Won Liverpool’s second penalty with some fine footwork shortly after coming on, but arrived as his side dropped the tempo.

Emre Can (on for Henderson, 73′) – N/A – Received invaluable game time after injury, but could do little to further influence the result.

Speaking ahead of the game, Klopp urged supporters to raise their expectations for Liverpool’s second home clash of the season, saying “we have to go to Anfield on Saturday and set the tone for the afternoon.”

Watching his side fulfil their half of the bargain on the pitch, Klopp will have been pleased to hear Merseyside roar the Reds on throughout.

Klopp himself barely put a foot wrong, with his team selection faultless and his use of late substitutions to rest Henderson, Lallana and Coutinho very sensible.