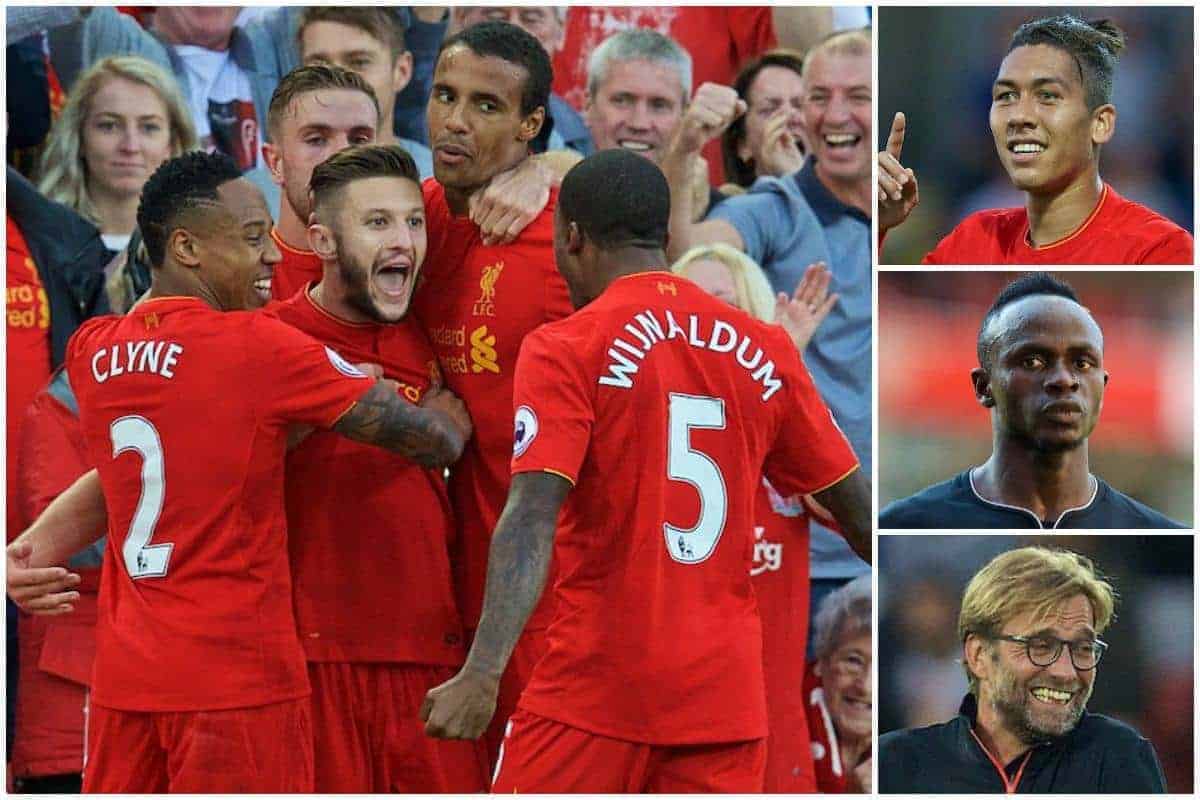 With a month of the 2016/17 season done and dusted, Liverpool look in good shape overall, picking up seven points from their first four Premier League games.

It has been a typically entertaining start to the campaign by the Reds, who have played some breathtaking football in the opening few weeks.

In the league, an epic 4-3 win at Arsenal was followed up by a dreadful 2-0 loss at Burnley.

But a more-than-deserved draw at Tottenham Hotspur and a 4-1 drubbing of champions Leicester City have ensured the positives outweigh the negatives.

Meanwhile in the League Cup, the Reds thrashed Championship newcomers Burton Albion 5-0, sealing progress to the third round.

While there are undoubted flaws within the team, Jurgen Klopp‘s side look arguably the most exciting attacking side in the country at present, and should only improve.

Here are five things we have learned over the last month.

Mane Could Be The Best Signing In Years When it was announced that Sadio Mane was joining Liverpool for £30 million, there wasn’t universal optimism from the Reds fanbase.

The Senegal international had been a key player for Southampton—he took Liverpool apart almost single-handedly last season—but could he thrive at a top club?

But Mane has enjoyed a sensational first month in a Liverpool shirt, and has been involved in five goals in his four appearances, with two goals, three assists.

The 24-year-old’s stunning solo effort at Arsenal was a sign of things to come, and he was again a key figure against Burton and Leicester.

Mane even missed the Burnley defeat, which further outlined how important he already is to this ever-improving Liverpool side.

The speed, movement, end product and intensity that he has brought to the team has been unbelievable, and he looks a magnificent signing.

It is still early days, of course—he was sometimes criticised for a lack of consistency at Southampton—but he looks Liverpool’s best buy since Daniel Sturridge and Philippe Coutinho arrived in January 2013.

Firmino Set For a Big Season

When it came to predicting how Liverpool’s season would pan out during the summer, there were many who tipped Roberto Firmino to play a starring role in 2016/17.

Having shown plenty of potential in his first year on Merseyside, scoring 11 goals and producing some moments of individual magic, he has gone up another gear so far this season.

Whether it be leading the line or coming in from the left-hand side, Firmino has looked fantastic, combining technical brilliance with a non-stop work ethic.

The 24-year-old delivers a consistent flow of goal and assists, and his double against Leicester, along with his all-round performance, was majestic.

Game by game, the Brazilian is becoming one of the first names on Klopp’s teamsheet, and there is even an argument to say he is now more influential than his compatriot, Coutinho.

Firmino still needs to find more consistency to his game, but all things point towards him becoming a real superstar at Anfield as the weeks and months pass.

Matip the Missing Link in Defence

Ever since the departure of Sami Hyypia in the summer of 2009, Liverpool have looked susceptible and lacking in authority at the back.

Jamie Carragher was something of a fading force by that point, and the likes of Daniel Agger and Martin Skrtel were too often hit-and-miss, despite a good spell together in 2011/12.

Klopp made Joel Matip his first-choice transfer target when it came to bringing in a new centre-back, acquiring his signature in February, before he joined from Schalke 04 in the summer.

Although the Cameroonian has only made three appearances to date, his towering presence, elegance on the ball and positional sense appear to be exactly what Liverpool have been missing.

Mamadou Sakho can offer that, but injuries have been a constant issue, and his disciplinary problems are threatening to end his Reds career.

Matip was particularly impressive against Leicester, making seven clearances and two interceptions, and he simply looks the part at the heart of the Reds’ defence.

Liverpool’s set-piece woes may finally become a thing of the past with the giant 25-year-old marshalling the troops—they may even have a centre-back who does the business at the other end, too.

In years gone by, Liverpool have often had a strong first-choice starting lineup, but a complete lack of options from the substitutes’ bench.

Injuries have invariably hurt them, with too much reliance on three or four key players a consistent shortcoming under various different managers.

Klopp is now building a formidable-looking squad, however, with plenty of options all over the pitch, barring full-back.

Emre Can, arguably Liverpool’s Player of the Year last season, has not been missed through injury, while Coutinho’s absence against Leicester was not remotely felt.

There is now a healthy battle for places, particularly in midfield and attack, which can only bode well moving forward.

Certain players will understandably be missed if they are out for a long period of time, but not half as much they would have been in the past.

Injury to Daniel Sturridge used to feel like the end of the world, but for all the striker’s brilliance, a spell on the sidelines would no longer feel fatal; while Can’s absence has been catered for by the development of Jordan Henderson in his role.

Squad depth is absolutely essential, as all of the Premier League‘s truly great sides have shown throughout history, and Klopp has addressed that, on the whole.

It is easy to forget just how good Adam Lallana was for Southampton in 2013/14, when he was deservedly nominated for the prestigious PFA Player of the Year award.

The 28-year-old has had a curious Liverpool career to date, failing to ignite in his first year at the club, before improving immeasurably when Klopp arrived last October.

Despite this, there were still plenty of question marks over his place in the team, with plenty of the opinion that he would be limited to more of a squad role this season.

Klopp is a huge admirer of Lallana, though, and his faith in him is continuing to be repaid in the opening weeks of the campaign.

The England international has been superb in general, adding far more substance to his game—three goals and an assist for club and country already—and looking like a key player in a more central role.

His work rate is phenomenal—in the mauling of Leicester, he covered more ground than any Premier League player in 2016/17—and his class on the ball and ability to interchange have helped make Liverpool tick.

Like Firmino, his level should only rise for the foreseeable future.