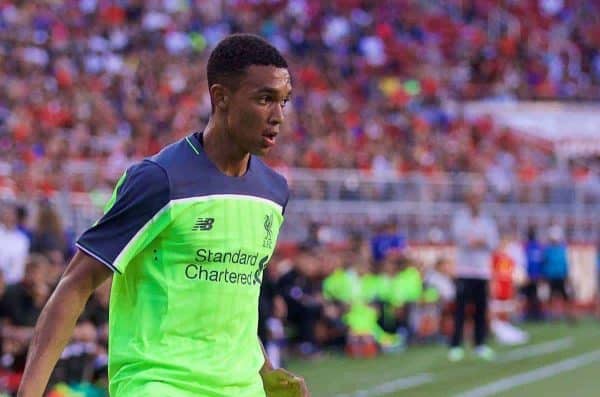 Liverpool’s Trent Alexander-Arnold played a key role in the England U19s game against a strong Dutch side on Thursday afternoon.

The 17-year-old was in the starting lineup and featured heavily in the game which ended in an England penalty shoot-out victory.

Liverpool’s academy star played at right-back in a traditional 4-4-2 system and showed his desire to push forward from the full-back position, adding support in attack.

Alexander-Arnold could’ve bagged a goal in the second half as England pressed for the winner in 90 minutes but Justin Bijlow was forced to produce a string a good saves.

England boss Keith Downing said of the performance: “The Netherlands are a real quality opposition and provided us with a real challenge. I am delighted with how the players performed. They stuck to their task and showed real quality.

“It’s a work in progress, a new group of players so there is quite a lot of work to be done, but we saw that we are on the right road.

“We are geared to making it to the UEFA Euro Finals in Georgia next summer but also helping players develop individually.

“We learned a lot. It was a good game and a good challenge and now we move on to the Belgium game. We will be making changes as we want to give every player a chance to show what he can do.

“I think we saw that this England U19 team are a particularly talented lot.”

Despite the imminent changes, Alexander-Arnold is still expected to play a starring role in England U19s next fixture against Belgium and he’s already been named as part of the squad.

Alexander-Arnold featured heavily throughout Jurgen Klopp‘s pre-season campaign this summer and could provide cover for Nathaniel Clyne this season.

The former Liverpool U18s captain has trained with Klopp’s first team squad for the majority of the season and was named on the bench for the opening game of the season at Arsenal.

The youngster is also versatile and can play in a box-to-box role in midfield but he has excelled in the right-back role recently.