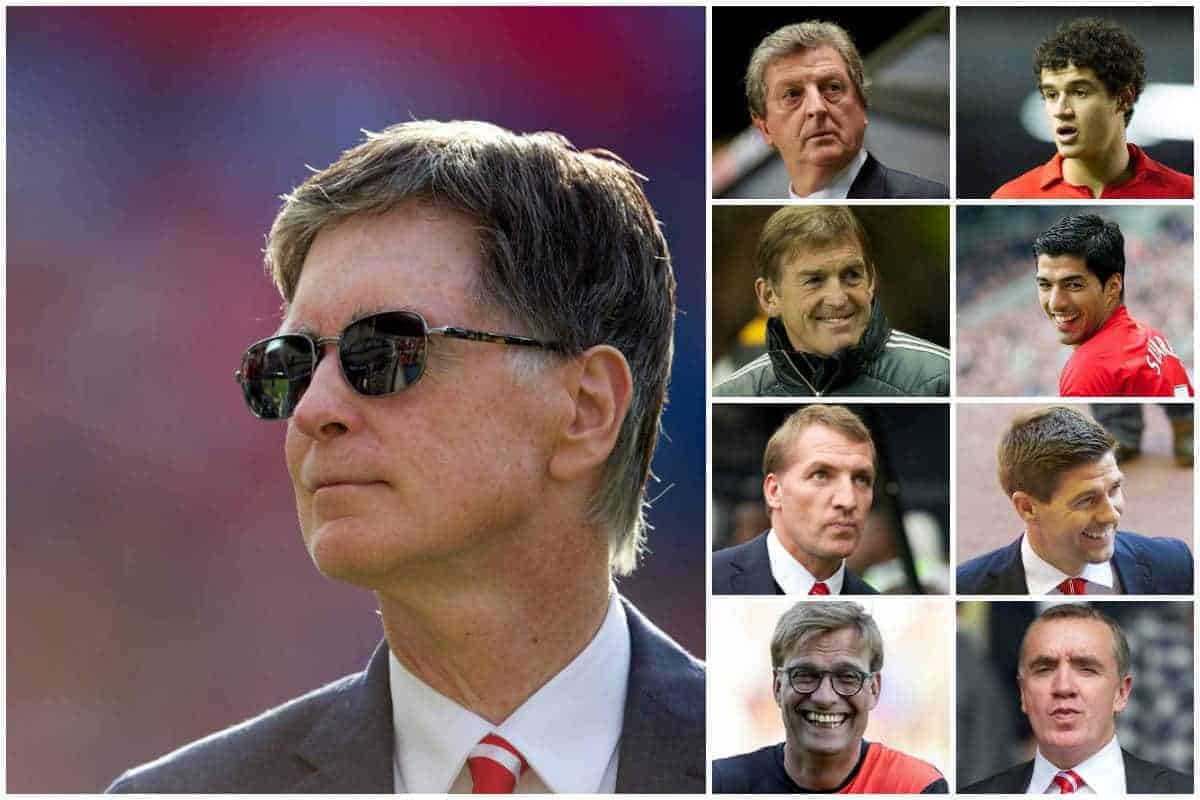 Saturday marks the six-year anniversary of Fenway Sports Group’s ownership of Liverpool Football Club, and it’s been a hectic and emotional time so far.

Six years have now passed since FSG, led by John W. Henry and Tom Werner, took ownership of the Reds—and it’s been a period mixed with many highs and lows.

Liverpool FC is now a very different club to the one the Americans inherited, with positive strides having been made in various aspects during FSG’s time in control.

A historic day as Liverpool’s troubled era under Tom Hicks and George Gillett comes to a close as the cowboy duo are forced to sell to New England Sports Ventures.

Upon the takeover completion, Henry announces he’s “proud” and “humbled,” before outlining his ambition: “We’re here to win.” FSG make their first big move by bringing Roy Hodgson’s disastrous six-month spell to an end, after 31 games and just 13 wins in the hot seat.

The Americans immediately turn to Reds legend Kenny Dalglish to steady the ship—a move that instantly united the club. Dalglish is awarded a new three-year contract having inspired an impressive upturn, guiding the Reds out of trouble and to a respectable sixth-place finish.

A momentous day as Liverpool win the first trophy of FSG’s tenure by beating Cardiff City 3-2 on penalties to claim the League Cup at Wembley Stadium.

FSG scrap their planned model and part company with Comolli 18 months after appointing him as director of football strategy, following some uninspiring transfer business which saw both Charlie Adam and Stewart Downing arrive at Anfield.

Liverpool’s quest for a second trophy in three months ends in disappointment as the Reds lose 2-1 to Chelsea in the FA Cup final.

It brings an end to a frustrating campaign in which the Reds finished eighth in the Premier League and with just the League Cup to show, putting big pressure on Dalglish.

A sad day at Anfield as FSG sack King Kenny after a poor league campaign and despite League Cup and near FA Cup success, just a year on from signing a three-year deal.

The search for a new boss begins immediately… Swansea manager Brendan Rodgers is unveiled as the man to lead Liverpool into an “exciting” new era, as FSG decided against appointing Wigan Athletic’s Roberto Martinez.

The 39-year-old becomes Liverpool’s 22nd manager and the second-youngest man to lead the club.

After a slow start to the campaign leaves Liverpool with just one point from their first three league games under the new manager, Henry pens an open letter to fans appealing for patience.

A six-part fly-on-the-wall series of the goings-on at Liverpool airs in the United States, showing the end of Dalglish’s reign, the opening of Rodgers’ tenure and their US pre-season tour.

FSG’s decision to agree to such a project splits opinion but the series unquestionably provides interesting viewing. The Reds enjoy one of their best transfer windows in recent times as Philippe Coutinho and Daniel Sturridge arrive from Inter Milan and Chelsea respectively, for a combined £17.5 million.

Arsenal’s attempts to lure Luis Suarez to the Emirates Stadium prove fruitless when FSG rebuff two offers for the Uruguayan.

The Gunners infamously offered £40,000,001, believing they’d activated a release clause with the extra pound, but instead inspired this, now classic, tweet from Henry:

Patience and belief from the Anfield hierarchy pays off as Liverpool smash Arsenal 5-1 at Anfield with the best display of Rodgers’ reign, sparking an 11-game unbeaten run which catapults the Reds into the title race. A magnificent campaign in which Liverpool come within a whisker of winning the title, prompts FSG to commit to Rodgers by handing the Northern Irishman a new three-year contract.

“We place our trust in Brendan to deliver the vision we share for Liverpool Football Club. Brendan is at the heart of what we, as an ownership group, are trying to achieve on the pitch.” A summer of disruption follows a memorable campaign and Suarez leaves for Spanish giants Barcelona for £65 million—the highest fee Liverpool have ever received for one player.

Nine players, including Mario Balotelli instead of Alexis Sanchez, arrive as Rodgers overhauls, but fails to improve, his squad.

A historic day as Liverpool confirm the redevelopment of Anfield’s Main Stand will commence imminently, with the renovation to the old-school terrace planned to finish in time for 2016/17 season. It proves a gutting end for the captain as the Reds sign off the season in woeful form and with a humiliating 6-1 defeat at Stoke City, which cranks up the pressure on Rodgers.

Liverpool’s shambolic end to a disappointing season seemingly leaves Rodgers on the brink, but FSG decide to back their man to inspire a turnaround following intense end-of-season reviews.

Having proved unable to turn around Liverpool’s increasingly dire fortunes, Rodgers is sacked after a 1-1 draw with Everton.

The Ulsterman leaves 18 months after coming agonisingly close to winning the Premier League and having won 85, drawn 39 and lost 42 of 166 games during his three-and-a-half-year stay. FSG’s search for a fourth manager of their tenure sees them make the best move of their five-year ownership by appointing one of European football’s most-coveted managers as the Reds’ new boss.

Reds fans vent their anger at the proposed ticket prices for 2016/17, by staging a mass walkout during the game with Sunderland.

Without Klopp in the dugout due to illness, Liverpool surrender a two-goal lead to draw 2-2, ironically showing the importance of the support and prompting FSG to back down on the planned prices.

Klopp’s quest for League Cup glory ends in disappointment as Liverpool agonisingly miss out on penalties to Manchester City at Wembley.

The Reds lose 3-1 on spot-kicks after a 1-1 draw, defeated in a final for the second time under FSG’s watch.

A long, emotional season for Liverpool ends in brutal fashion as the Reds collapse to a crushing final loss to Sevilla—missing out on a return to the Champions League as a result.

Klopp rallies his squad on return to their Basel hotel, leading his squad in a rendition of Kop classic ‘We Are Liverpool’.

Blown away by the German’s impact at Anfield, FSG tie down Klopp’s long-term future, with the manager committing to a new six-year deal along with his assistants, Peter Krawietz and Zeljko Buvac.

Henry, Werner and FSG president Mike Gordon say: “When you have an individual of Jurgen’s quality in the building it makes perfect sense to secure that person for the long term. To not do so would be irresponsible.” The Reds mark the opening of a redeveloped Anfield by thrashing champions Leicester City 4-1 a day later.