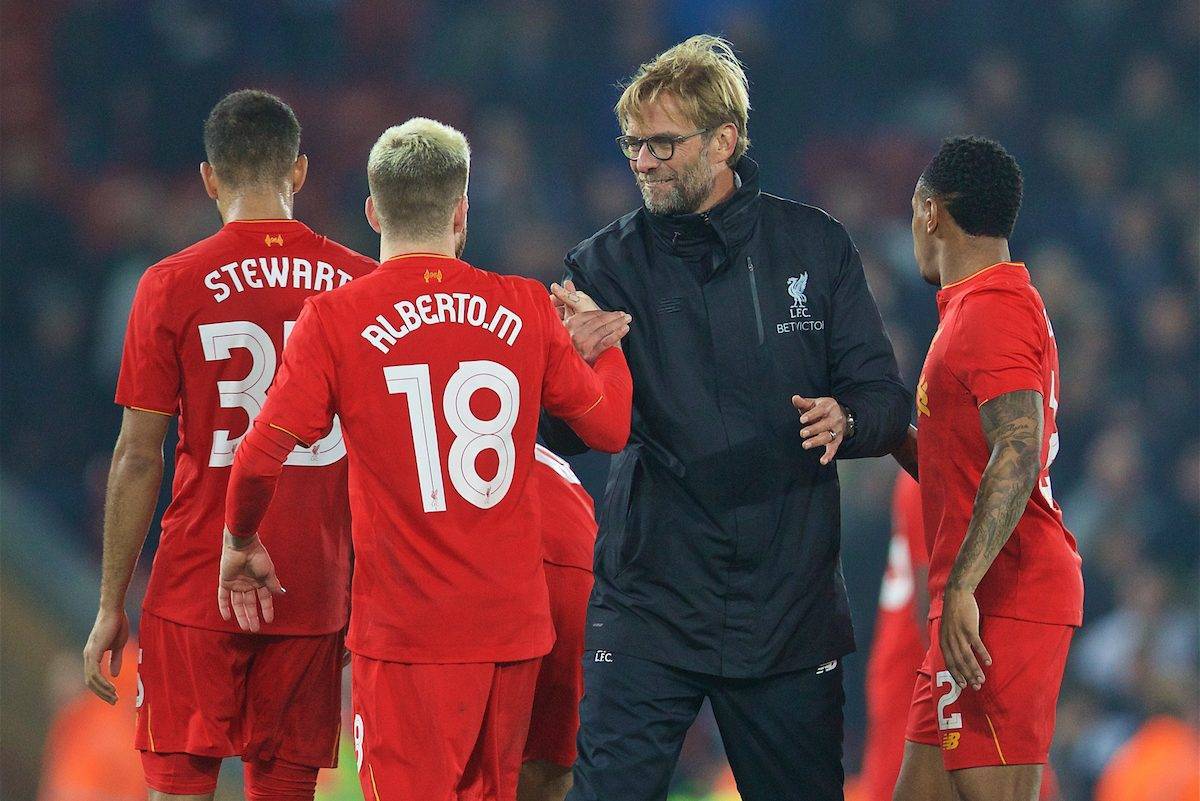 A much-changed Liverpool side advance to the next round of the EFL Cup, but which of these newcomers and squad players made the biggest impact on the game?

Claimed his first cross of the game with ease, but was less comfortable under a Kieran Trippier ball in shortly after.

Made a good save low down to his left from Ben Davies in the first half, and made some saves and claims towards the end of the game which were important to the win.

The most notable of which was a stop from Victor Wanyama’s well hit shot, which he could have easily spilled.

Wasn’t able to save Vincent Janssen’s penalty kick, but it was a night when Liverpool’s goal felt safely guarded with the Belgian between the posts.

Made a good interception with his first touch of the game on his debut.

Gave a good display of pace and anticipation, while also showing a sense of adventure going forward down the right.

A mistimed, ill-advised tackle on Davies earned him a yellow card midway through the first half, but he will have been pleased with his debut performance for the club.

He might have been even more pleased with the trademark Klopp hug he received after being taken off in the second half. The captain made his intentions clear with a great early tackle on Vincent Janssen, making his mark on the opposition striker right from the off.

Made a very important block from Georges-Kevin Nkoudou’s close range effort in the first half, but he spoiled an otherwise decent night at centre back by giving away the penalty from which Janssen scored.

At times he looks like a very useful option in the position, but as was the case when he played there against Leicester, a high-profile error let him down.

Took a while to settle and was often sloppy with his passing.

Looked like a centre back who’d not played for a while, but didn’t do anything drastically wrong on the night.

Gave away the odd daft foul, but worked well up and down the left hand side.

Made sure he got in one of his trademark flying back-heel-sweep tackles, and showed good recovery pace without some of the usual clumsiness.

Would almost go as far as to say that he looks a threat in the final third, too. Neat, tidy, and unspectacular. Just what you like to see from the defensive midfielder in a diamond formation.

He did have one shot though, a left footed effort in the first half, but it sailed over the bar.

The 23-year-old kept things ticking over, and despite the odd wayward pass he was generally sound.

Made the joint highest amount of interceptions with five, Lucas being the other player.

Really wants a goal. He saw a left footed effort towards the end of the first half blocked, and a free kick in the second period was saved by Michel Vorm.

But there was more to his game than the quest for goals.

He started to link up well with the strikers in the second half and was generally more involved in this period.

Had a chance to get his goal following good work from Sturridge in the area, but couldn’t make clean contact with the ball.

He went on to provided the assist for the England striker’s second, splitting the defence with a ball perfectly weighted for Sturridge’s run.

Involved occasionally, but when he is he looks he could be a good player in the future.

Took some time to settle into the game, as did most of the midfield diamond.

Might be disappointed with his performance tonight, such are the standards he’s set at U23 level, but the experience will be useful for him. Pounced on the loose ball after Nkoudou’s poor touch, before his shot deflected into the path of Sturridge who scored.

Dragged a right-footed shot wide not long after this, and was then peripheral for parts of the game.

He started the move which led to the second goal by battling to win a header in midfield, and he also presses surprisingly well for a player of his size.

Picked up a yellow card for a tired foul towards the end of the game. A typical Sturridge performance of well-taken goals and some good linkup play in the final third.

He was alive to the deflection following Grujic’s shot to poach the early goal, and had a shot well saved by Vorm shortly after.

Missed a great chance to score not long after this with just the keeper to beat, but ball fell on his much weaker right foot.

Did well to create a chance for Wijnaldum, showing a good turn of pace—something we haven’t seen too often since his injury—before knocking the ball back to his team-mate.

The favour was returned minutes later as Wijnaldum put him through one-on-one with Vorm. He calmly slotted between the Spurs keeper’s legs to double the lead.

Hit a free kick just over, and also saw his deflected shot turned onto the bar by Vorm before his night’s work was done.

Gave a display of strength, pace, power, and skill.

Could be seen rampaging upfield from the halfway line in to the opposition area to eventually set up Sturridge.

Created another chance for his strike partner in the second half with a tempting ball across the six yard box which Spurs just about managed to clear.

Pinged a powerful shot form outside the area shortly after this, but was denied by a good save by Vorm in front of The Kop.

The fans repeatedly sang his name in the second half, until he was substituted midway through it. Found himself with a good chance to score not long after coming on, but hesitated and allowed the Spurs defence to recover.

The next time he was given a chance he went for power, shooting vociously at Vorm but the impressive Dutch keeper was able to parry it wide.

Made his usual tireless runs up and down the right hand side, and saw a well hit shot blaze just wide of the post. Took a chance by making eleven changes to this side which started against West Brom last Saturday.

Included the teenagers Alexander-Arnold and Ovie Ejaria as well as a whole host of players who are struggling to get into the first team.

It paid off, as the side advance to the next round of a cup which the manager seems determined to win after last year’s disappointment in the final.

It took a while for the 4-4-2 diamond formation he used in this game to become fluid, but there were moments when this unfamiliar team looked like the first team at its best.