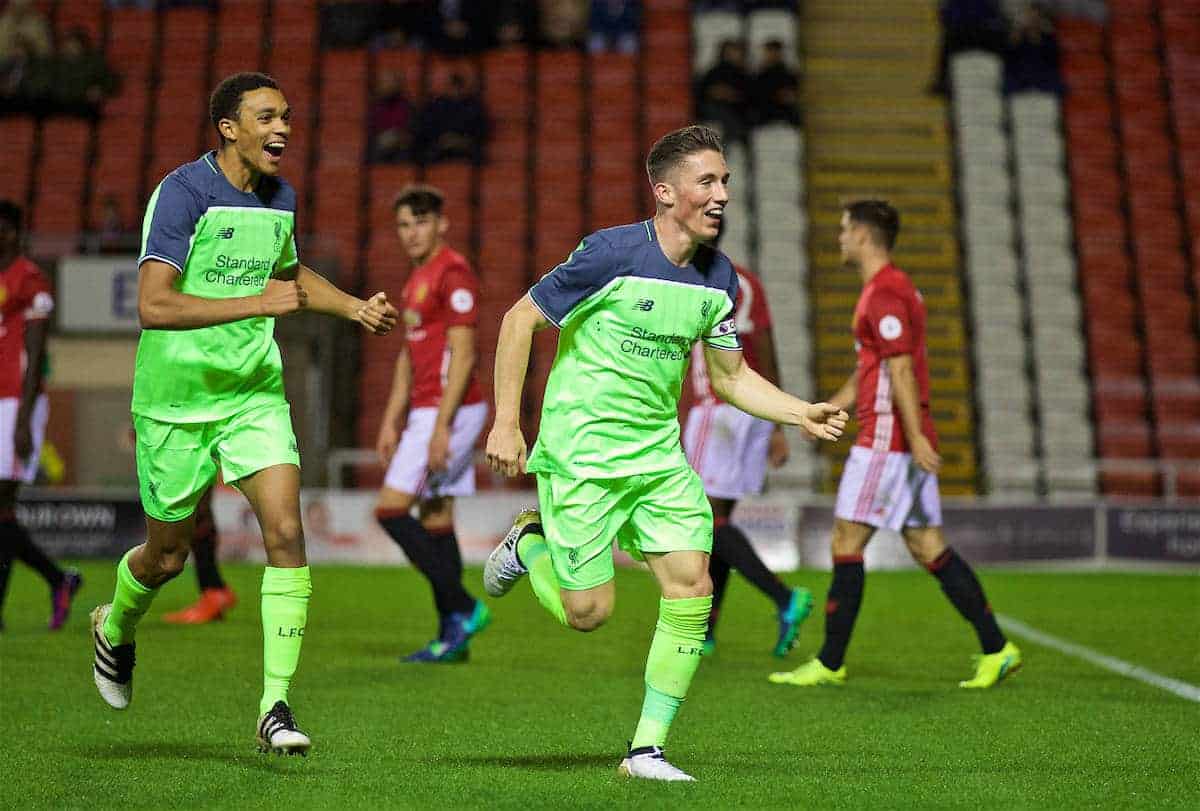 Mamadou Sakho started at centre-back alongside Tiago Ilori, Marko Grujic got a run-out in midfield and in-form Danny Ings once again led the line.

Exciting youngsters Trent Alexander-Arnold and Ovie Ejaria were involved from the start, although fellow prodigy Ben Woodburn had to make do with a place on the substitutes’ bench.

Alexander-Arnold suffered a horrible early fall, but recovered sufficiently enough to continue, while Sakho flew into a hard but fair tackle. Matthew Willock curled an effort just wide after some slack work by Kevin Stewart, while at the other end, Grujic was somehow denied after good work by Ings down the right.

Wilson gave Liverpool the lead in the 18th minute, seconds after Ings was denied by the post, with the midfielder flicking home Pedro Chirivella‘s goal-bound attempt.

Devonte Redmond hit the crossbar from 25 yards for United and Kamil Grabara made a crucial save from an inswinging free-kick, but it was a first-half that the Reds dominated.

Four minutes into the second-half, Chirivella conceded a penalty after pulling down Scott McTominay, and Josh Harrop converted from the spot.

Stewart fired just wide shortly after, but the second-half had a more low-key feel to it, in comparison to the opening 45 minutes. Ings just couldn’t get on the end of a tempting Connor Randall cross with 20 minutes remaining, and the 24-year-old was then thwarted by Johnstone when clean-through.

Wilson shot over from just inside the penalty area, Grujic missed a guilt-edged chance with his head and Ings twice came close in stoppage time, but a winning goal just wouldn’t come.

Beale’s side had to settle for a draw in the end, but they were the superior team from start to finish. It was another good run-out for Ings, who looked very sharp, and Alexander-Arnold and Grujic also shone.

Football not “half as enjoyable” without fans, says Jurgen Klopp

Football not “half as enjoyable” without fans, says Jurgen Klopp

Klopp: “I am not like Gary Neville. This is about all players, not just Liverpool”