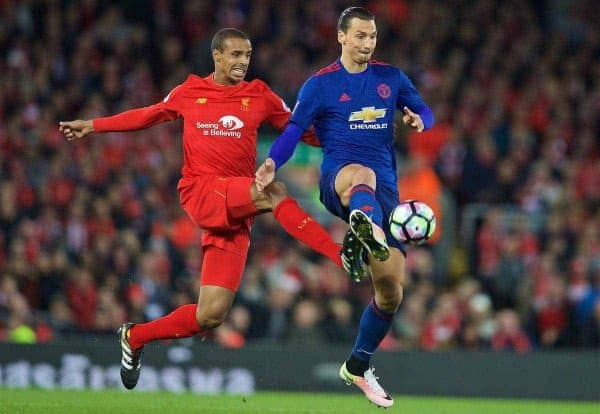 Stats: How Joel Matip countered the threat of Zlatan Ibrahimovic at Anfield

Ibrahimovic was one of a number of high-profile talents in Jose Mourinho’s starting lineup at Anfield, alongside the likes of David de Gea, Eric Bailly and Paul Pogba.

With Wayne Rooney left on the substitutes’ bench, Mourinho had once again put his faith in the legendary Swedish striker to put his opponent to the sword.

But, with the 0-0 scoreline flattering United on the night, Ibrahimovic failed to do so, and this is largely due to the dominance of one of Jurgen Klopp‘s summer signings: Matip.

Matip, also signed on a free transfer—though to comparatively muted fanfare—was stationed on the right side of Klopp’s centre-back pairing.

This saw him clash directly with Ibrahimovic, and as statistics show after the game, the 25-year-old won the contest.

Ibrahimovic made just three touches in the Liverpool penalty area over his 90 minutes on the field, and though United’s game plan saw him drop back into his own half to collect the ball, as Mourinho’s focal attacking player, this is stark:

Matip’s role in this can be evidenced by his tally of three successful interceptions—all coming in the right channel, where Ibrahimovic prowled for much of the night:

Furthermore, Matip won one aerial duel, and made one successful tackle and three clearances on the edge of the Liverpool penalty area, in a near-flawless defensive display in the No. 32 shirt.

That he was able to rampage out of defence and into the United half further highlighted Ibrahimovic’s shrinking role, with Matip setting up an attempt from Emre Can with a bursting run from deep on the hour mark.

Ibrahimovic had just one shot on target, created one chance, was caught offside three times, dispossessed twice and made three unsuccessful touches.

He saw just 3.1 percent of ball possession, less than half that of Matip (7.1%) and less than every Liverpool player to start the game apart from Daniel Sturridge (1.7%).

It was an uncharacteristically poor performance from the 35-year-old, and Matip was the key factor behind this.