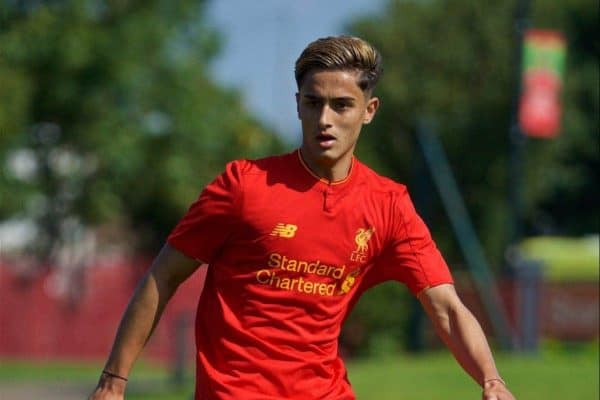 Promising duo Yan Dhanda and Bobby Adekanye were among the scorers as the Liverpool Under-18s thrashed Derby County 5-1 on Saturday morning.

Kicking off the action for the weekend, the young Reds travelled to Derby’s Training Centre to take on a Rams side who were yet to be beaten at home this season.

U18s manager Neil Critchley was able to field a strong starting lineup, while he was also boosted by a return to the bench for Adekanye, following the Dutch winger’s hernia operation.

Starting in goal was Caoimhin Kelleher, highlighted in first-team captain Jordan Henderson‘s programme notes ahead of Liverpool’s Saturday evening clash with West Bromwich Albion as one of the academy’s most impressive talents.

The Irishman operated behind a back four of Adam Lewis, Kris Owens, Conor Masterson and George Johnston, with a strong trio of Liam Coyle, Jordan Hunter and Herbie Kane stationed in midfield.

Glen McAuley and Rafael Camacho joined Dhanda in attack, with Liverpool fighting back after an early setback to seal an emphatic win.

Derby forward Jahvan Davidson-Miller struck within the first 10 minutes to give the home side the lead, but McAuley and Dhanda were both on target to make it 2-1 before half-time.

Kane was forced off with a hip injury at the halfway mark, but this gave Critchley the opportunity to introduce Adekanye.

The former Barcelona star scored the Reds’ third following a corner, before Rams midfielder Joe Bateman turned in an own goal and Camacho made it 5-1 with the pick of the strikes.

The Portuguese picked the ball up in the middle of the park, before beating two men and hammering the ball past Matt Yates.

This rubber-stamped an excellent performance by Critchley’s side, with ex-Reds right-back Rob Jones among those impressed in the stands:

Speaking after the game, Critchley hailed Adkanye’s return, but equally bemoaned the loss of Kane to injury.

“It was a good all-round performance by the boys and we played some really good stuff,” he reflected.

“We went a goal down after just seven minutes but we grew into the game and soon went 2-1 up.

“It was great to see Bobby return from injury and score, and we scored some excellent goals.

“The only downside was losing Herbie Kane with a hip problem. Herbie was only just returning back from injury, and we are hoping he will be okay.”