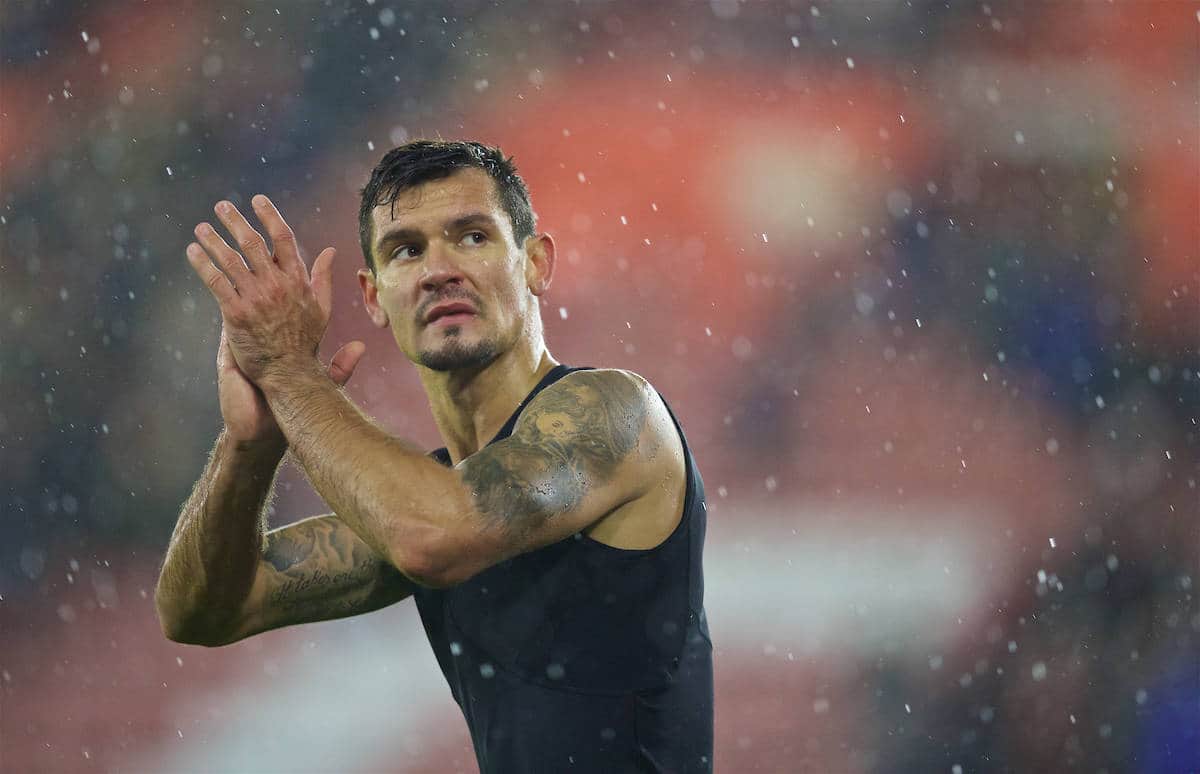 Aaron Cutler praises Dejan Lovren, who has restored his reputation under Jurgen Klopp.

Stalemates are seldom fun. A goalless draw at St Mary’s stunted Liverpool’s recent surge but the disappointment felt should not detract from a great many positives.

Undeniable was the Reds’ sheer dominance. Few sides will venture south this term and restrict Southampton to a mere three efforts on goal. Fewer still will force them onto the back foot and into near total retreat.

Saints, an expansive team well versed in taking games to the opposition, were entrenched from the off. Thoughts on occupying the final third were fleeting. Instead a fear of being cut open and embarrassed saw them deploy a rearguard action more identifiable with a shameless Jose Mourinho gameplan.

That Liverpool spark such fear and tactical revision is testament to their burgeoning reputation. That they remained patient and created chances aplenty is better still.

Roberto Firmino was a bundle of energy and bedevilment, Jordan Henderson marshalled the midfield with nonchalance, while an undercooked Philippe Coutinho still prompted Pierre-Emile Hojbjerg to consider his career choices.

Underpinning it all however was another resolute defensive showing. Whisper it but our backline is beginning to look rather good.

Long derided as the worst of Achilles heels, the arrival of Joel Matip has brought a degree of calm and tranquility to a unit now rarely flustered. Indeed, since the Cameroonian debuted at White Hart Lane in September, only Arsenal, Chelsea and Spurs have shipped fewer goals.

The re-deployment of James Milner has certainly helped in this but Matip’s defensive partner has undergone an even greater reinvention.

It is fair to say Dejan Lovren has endured a love-hate relationship with The Kop. He was billed as a fabled missing piece, the man intended to plug a deluge of defensive errors and thus catapult the reds to the Premier League summit.

He arrived with no shortage of ego, talking up his own qualities and declaring himself a leader.

Unlike Matip, who has slotted in with next to no fanfare, Lovren afforded himself a greater write up even than Brendan Rodgers. Once deemed impossible.

The expectation and scrutiny that he himself stoked undercut those early performances.

Hollywood passes were being attempted with almost comic frequency, as too were bursts from defence as the Croat tried in vain to justify the price tag, the hype.

This Becknebauer impersonation however fell frighteningly flat, particularly when punctuated with errors. High profile mistakes were compounded by an inexplicable overconfidence, the need to simplify seemingly alien.

As the team toiled Lovren bore the brunt of much criticism. He was duly dropped for Kolo Toure of all people and exiled even with the introduction of a back three – Emre Can, Martin Skrtel and Mamadou Sakho contributing to a mini revival of sorts.

In his defence the former Southampton man was handed an unenviable task. A lack of protection from a physically and mentally drained Steven Gerrard complicated matters. As too did the ever presence of Skrtel – a loyal servant yes but a man with a habit of being at the scene of every crime. No mere coincidence.

A chastening experience at the hands of Crystal Palace and Yanick Bolasie bookended that debut season, which concluded with Lovren’s very future being called into question.

A summer break appeared to do some good. Composed displays away to Stoke and Arsenal brought plaudits at the start of 2015/16, all before West Ham came to town.

Suddenly that inner chimp returned with a vengeance. Caught out showboating, Lovren inadvertently facilitated a West Ham opener and in doing so set them on course for their first win at Anfield in 50 years.

Groundhog Day also spelled the beginning of the end for Rodgers, himself given no more than a stay of execution.

If the arrival of Jurgen Klopp re-invigorated the football club as a whole it did wonders for Lovren personally. Gradually introduced back into the fold he appeared to have discovered an ability to keep things simple. Lo and behold his form improved – considerably in fact.

The reds backline remained prone to the odd flash of pandemonium but come the run-in Lovren had seen off Skrtel and established a decent partnership with Sakho. The defining moment for that pair undoubtedly came at home to Borussia Dortmund and the crescendo of one of the great Anfield nights.

As Lovren rose high to head home a 94th minute winner it spelled passage to the Europa League semi-finals yes but just as importantly for the player himself, redemption .. acceptance.

With Sakho ostracised Lovren is beginning to develop that same understanding with Matip. The pair never look ruffled, at least not in open play. Moreover the Croatian has shown resilience acquired from 18 months of turmoil.

On Saturday he was subjected to the most appalling abuse by a set of supporters harbouring an unhealthy obsession. That same treatment was dished out last March and had enough of an effect to prompt Klopp into substituting the defender. Last weekend however he rose above the cacophony of would-be cockney and simply played his game.

And that is the biggest compliment you can pay Dejan Lovren these days. He plays HIS game.

No longer auditioning to be the next great centre back or Baresi Mk II, he has established himself and become wholly reliable.

Ironically, the demise of his great mate Sakho has helped this revival. The Frenchman is/was a fan favourite who saw his every touch heralded.

Rightly or wrongly Lovren was deemed not only a threat to Mama’s starting position but the antithesis of the man. Imaginary battle lines were drawn. Liking both was not an option. You HAD to pick a side. That sideshow has dissipated and both Lovren and James Pearce have been allowed to move on with their lives.

No player is without fault but the centre half’s response to gifting Palace a goal last month told a story in itself. Two years ago his game would have unravelled. Now he is confident enough to dust himself off and respond in kind – powering a header home to draw his team level.

That is the new Dejan Lovren. A footballer we have come to appreciate and respect, perhaps even like?