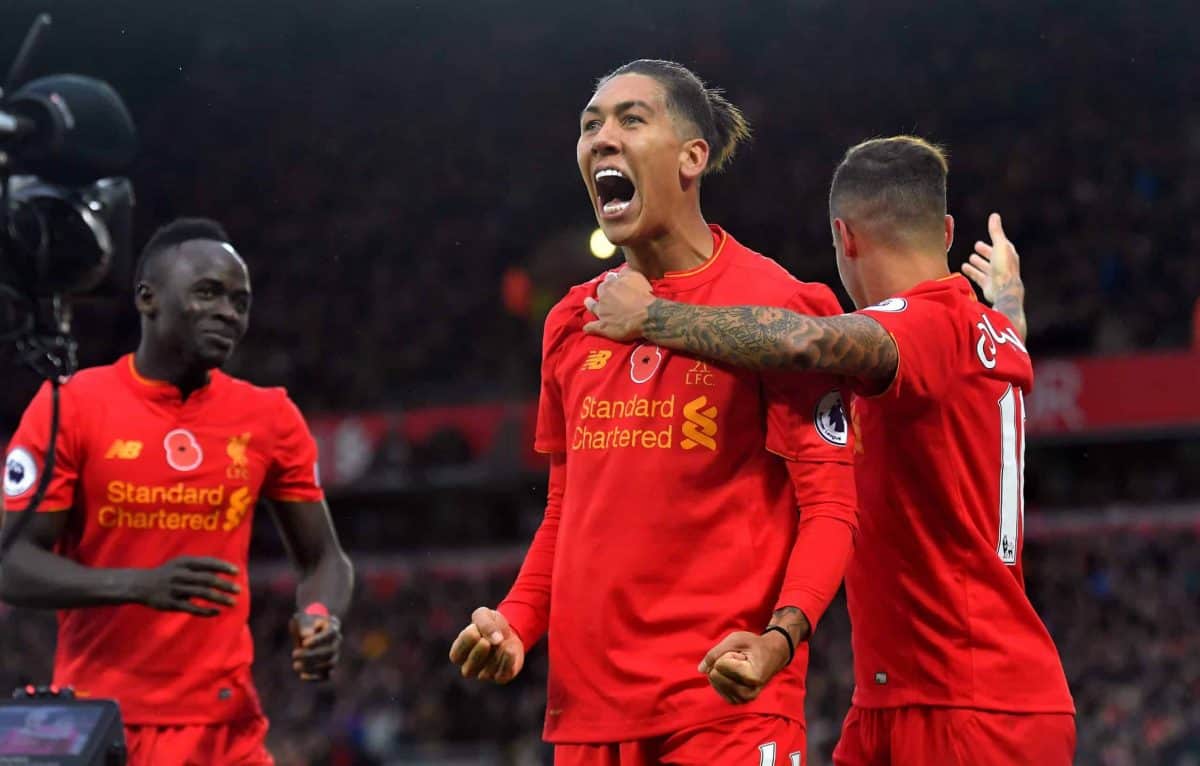 Liverpool look to return to winning ways on Saturday afternoon as Sunderland visit Anfield in the Premier League.

Liverpool’s goalless draw at Southampton last weekend was frustrating, with the Reds easily did enough to win the game – and Jurgen Klopp‘s side will be looking to get back to the free scoring ways of before the international break.

David Moyes though says he’s planning to “park the double-decker bus” at Anfield.

Sunderland have won their last two games, with former Everton and Man United boss Moyes looking to cause an upset on Merseyside.

A repeat of the 6-1 thumping of Watford last time out at Anfield would make for another memorable afternoon, as Liverpool look to stay right in the title hunt.

The Reds trail current leaders Chelsea by one point going into the weekend. We spoke to Sunderland fan Rory Fallow (@RoryFallow), contributor to the Roker Report blog and podcast, to get his thoughts on the Black Cats’ campaign, and this weekend’s Anfield showdown.

How would you rate Sunderland‘s season so far, out of 10? Who have been the standout players?

Not very highly, despite recent back-to-back wins. I’d give it a 3/10 but before we actually managed to get a couple of wins, it was probably minus figures.

Jermain Defoe is the obvious answer in terms of stand out players. When you watch him play, it’s like he’s never aged and he’s still scoring for fun. At the other end, Jordan Pickford has been brilliant in goal and looks like he’ll get his first England cap this season.

It was great for him to finally get a clean-sheet in the Hull game, because he’s kept a few matches respectable for us. The recent revelation though is Victor Anichebe! Two starts, three goals and watching him bully defenders has been brilliant. The hold up play and the space Anichebe opens up has finally given us an identity on the pitch.

It’s a pretty obvious plan but hopefully one that teams keep finding difficult to stop. While we can’t expect such brilliant performances from ‘Cheebs’ every week, it’s great to see something clicking in the team, at last.

You seem to miraculously escape relegation every season, but do you think this year might be a step too far?

The first 10 games of the season were far worse than any of the previous survival campaigns, which led to most fans thinking this would be the year we drop.

We’ve put ourselves back in with a chance now, though, and there’s certainly some other terrible teams down there with us, so you never know.

Focusing on Saturday’s game, how highly do you rate this Liverpool side and certain players? Title contenders?

You have to have a heart of stone or be an Everton/Man United fan to not enjoy watching this Liverpool team. The way Jurgen Klopp has the side playing is fantastic and Klopp himself is such a great character. I think you’ll definitely finish top-four and be serious title contenders.

Adam Lallana is the standout player, for me. Great technique, he can create, finish and he works hard. I have to mention Jordan Henderson as well – I love seeing him doing so well. The determination of him was evident as soon as he broke into our team and it didn’t surprise me to see him get given the captain’s armband at Liverpool.

What’s your prediction? How do you see the match panning out in a tactical sense?

I can’t see us getting anything out of the game – you’ll just have too much for us going forward. Our plan will be to use Anichebe to take the pressure off the defence, holding up the ball and slowing the game down. Jason Denayer will screen the back four and look to track any late runs through the middle, with John O’Shea dictating and organising at the back.

Your quick, attacking movement will obviously see you create chances and you’ve got the personnel to put those opportunities away, something that we got away with against Hull.

We’ll need all of our players to be at their best and their concentration levels will have to be 100% too. If Pickford has a Jurgen Macho-esque game then maybe we’ll nick something but I’m not confident. 3-1 to Liverpool. The only major absentee for the Reds is likely to be Adam Lallana, with the 28-year-old still not back in training after picking up a groin injury with England.

Klopp could field the same starting line-up that drew at Southampton last time around, with Emre Can and Georginio Wijnaldum ahead of the more deep-lying Jordan Henderson in midfield.

Alternatively, he could be bold and play Philippe Coutinho in midfield in place of Can or Wijnaldum, allowing Daniel Sturridge to come into the attack.

Jason Denayer is a doubt for Sunderland because of a tight hamstring, while former Man United youngster Paddy McNair has been ruled out for the entire season after suffering cruciate ligament damage.

Lee Cattermole is also not expected to return until well into 2017, while Jack Rodwell and ex-Liverpool forward Fabio Borini are unavailable for Saturday’s game. Klopp’s pre-match press conference was dominated by questions on Steven Gerrard, but on Sunderland he said:

“It will be the opposite of easy.

“Especially Anichebe. (He’s a) very physical, strong guy. Maybe they (Sunderland) have played better games than against Hull and Bournemouth but they won, that’s the most important thing. They have confidence now.

“Everybody knows everything about Defoe. He’s a good striker, experienced and still really quick.

“Sunderland have taken six points out of their last two games. We only took four so they are favourites if you like.”

One to Watch: Jermain Defoe

He may be 34 years old, but Defoe continues to score goals in the Premier League.

The former England striker is in good form having scored in each of the Black Cats’ last three league games.

He has seven league goals this season – which is more than any Liverpool player!

For a second week in a row, it’s a Saturday 3pm kick-off meaning no live TV coverage in the UK.

This Is Anfield will be running its live blog throughout the afternoon, though, so be sure to keep tabs on the game that way.