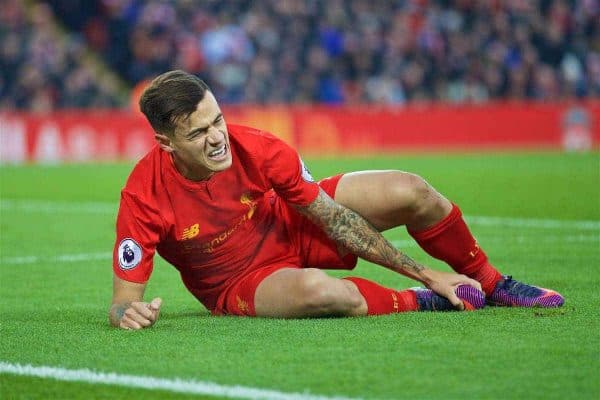 Philippe Coutinho ruled out until January

Liverpool have been dealt an injury blow with the news that Philippe Coutinho will miss around six weeks with an ankle injury.

The Brazilian was stretchered off during the Reds’ 2-0 win over Sunderland on Saturday, having collided with Black Cats midfielder Didier Ndong.

It was feared that the 24-year-old playmaker could have been facing even longer on the sidelines, but the good news is that he will not require surgery.

Hopefully he could be in line for a return for the trip to Man United on January 15th.

With Sadio Mane heading off to the Africa Cup of Nations in January, we won’t see a front three of Mane, Coutinho and Roberto Firmino again until February.

Given Coutinho’s imperious form so this season, news of his injury has caused much alarm among the Reds fanbase.

He had arguably been the Premier League‘s standout player to date, scoring five goals and assisting six more in the league alone.

Having gone for a scan on Monday, it has been confirmed that he will not represent Liverpool again this year, missing the busy festive schedule in the process.

In truth, the news could have been more devastating, with some expecting Coutinho to be missing for months rather than weeks.

This is a time when Liverpool’s squad depth must come to the fore, with the likes of Daniel Sturridge and Divock Origi stepping up to the plate.

Coutinho is undoubtedly going to be a big loss, but the Reds cannot let it impact too heavily on what we hope is a title-winning season.