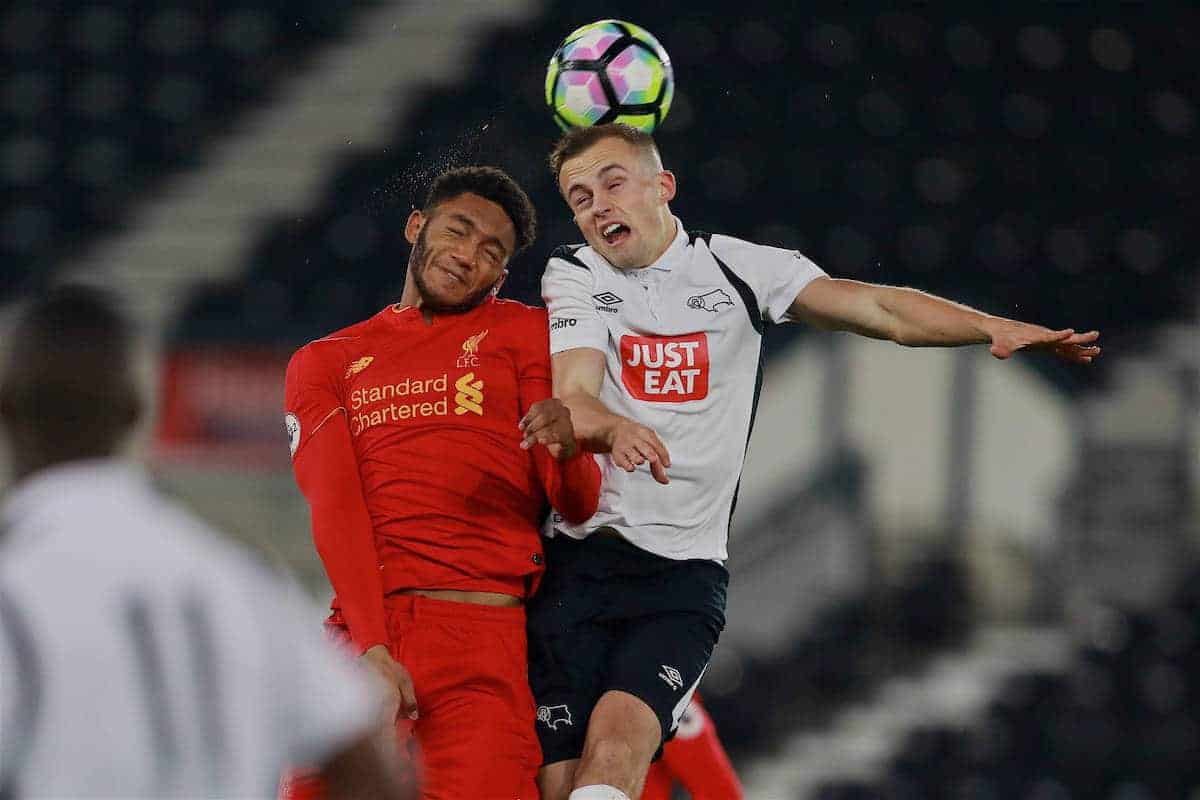 Liverpool’s U23s were held to a 0-0 draw by Derby’s youngsters on Monday evening, in a match the Reds dominated at Pride Park.

The young quartet of Trent Alexander-Arnold, Kevin Stewart, Ovie Ejaria and Ben Woodburn were all left out by manager Michael Beale.

It suggests that all four stand a good chance of featuring for the first-team on Tuesday, as Liverpool host Leeds United in the League Cup quarter-final at Anfield.

Joe Gomez continued his recovery from serious injury, starting in a three-man defence alongside Mamadou Sakho and Tiago Ilori, in Beale’s 3-4-3 formation.

There were also starts for Pedro Chirivella and Cameron Brannagan, who have seemingly drifted out from Jurgen Klopp‘s plans for now.

Beale’s men enjoyed more of the ball in the opening exchanges, with Gomez looking composed on the right-hand side of the back-three.

There wasn’t a chance of note in the opening 15 minutes, although Harry Wilson, in particular, looked like making something happen.

Matty Virtue’s header landed into the arms of Derby goalkeeper Jonathan Mitchell, while at the other end, Abdoul Camara curled narrowly over from distance.

Corey Whelan looked set to give Liverpool the lead midway through the first-half, but Mitchell pulled off a superb one-handed stop.

Wilson was the latest Reds player to be denied by Mitchell, with Derby’s ‘keeper thwarting the 19-year-old when clean-through.

A surging run by Gomez set-up Brooks Lennon shortly after, but the American’s finish was tame and straight at Mitchell.

The impressive Gomez hit the target from distance and missed a header from a corner, and they proved to be the final moments of note in a 45 minutes that Liverpool bossed. The Reds’ dominance continued into the second-half, with Wilson firing over the bar and Brannagan’s low effort testing Mitchell.

Lennon almost opened the scoring with a cleverly-executed header, while Charles Vernam missed the target for the hosts.

Beale introduced Joe Maguire and Madger Gomes in the 69th minute, in place of Juanma and Whelan, respectively, as Liverpool looked to nick a winning goal.

Kamil Grabara made a big save to deny Timi Elsnik, and Alex Babos shot wide, as Derby enjoyed a good spell for the first time in the match. Craig Bryson also just missed the target.

Neither side could find a winner in the closing stages, bringing an end to Liverpool’s run of three consecutive victories.

Gomez once again getting a full 90 minutes was the major positive to take from the game, as he edges closer to a first-team return.