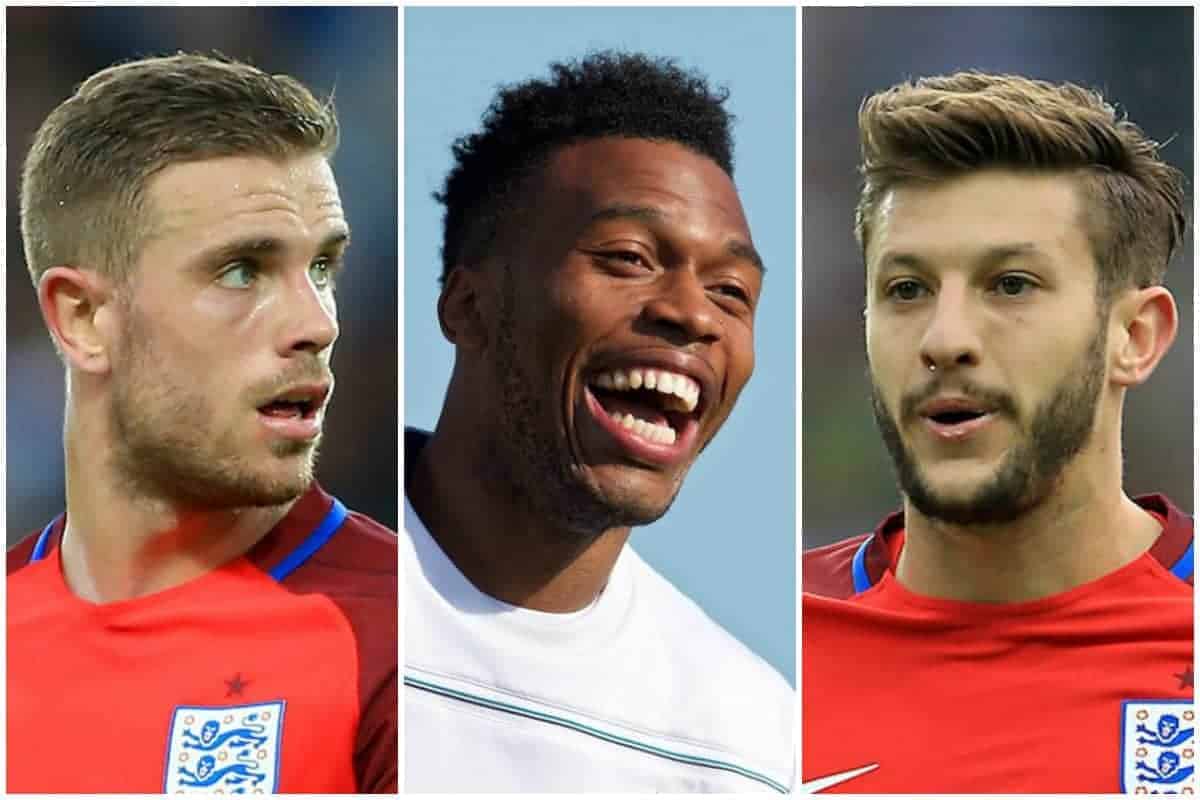 Three Liverpool players featured in Friday evening’s 3-0 triumph at home to Scotland, with Jack Lusby watching on at Wembley Stadium.

Taking on Home Nations rivals Scotland, England were expected to seal victory in an initially lively, then ultimately and familiarly drab atmosphere at their home stadium, and they did so clinically.

Sturridge opened the scoring with a stooping header in the first half, before Lallana doubled the lead after the interval with a nodded effort of his own, with Gary Cahill polishing off the victory on the hour mark.

It was a dominant display from England on the whole, but how did Henderson, Lallana and Sturridge perform?

Here’s the view from Wembley, as Lallana in particular shone on a cold night in northwest London.

Deployed in a deep-lying midfield duo alongside Eric Dier, Henderson was tasked with fulfilling many of the duties he does for his club, providing England’s back four with a defensive shield and moving the ball along efficiently—making two tackles, two interceptions and completing 86 percent of his attempted passes.

The 26-year-old produced a composed display in the No. 8 shirt, providing a constant outlet for the likes of Kyle Walker and Gary Cahill in possession, and tracking back to thwart Scotland’s counter.

Despite Dier’s club remit largely a defensive one, Henderson was seemingly given less freedom to drive forward into the opposition’s half than he enjoys under Jurgen Klopp.

This saw his pressing ability and creativity nullified to an extent, though he still whipped some dangerous crosses into the penalty area throughout—most notably on 70 minutes, with Raheem Sterling missing when it was easier to score.

Most impressive about Henderson’s performance was his constructive leadership, both in organisation and leading by example in terms of industry, serving as a captain without the armband.

Lallana was named Man of the Match on the night and rightly so, producing a bright display as he carried his club form over onto the international stage.

Starting as a nominal left winger in a 4-2-3-1 formation, Lallana was initially hampered by the frustrating approach of Wayne Rooney, with the England captain seemingly very difficult to play alongside, regularly drifting out of position and, as a result, muddying defensive responsibilities.

However, Lallana’s industry and creative influence grew as the game went on, with his second-half display particularly impressive, switching flanks with Sterling to take up a right-sided role.

This was marked by a goal just five minutes after half-time, making an excellent third-man run into the penalty area to meet Danny Rose’s cross, sending a downward header past Craig Gordon to make it 2-0.

Lallana’s instinct to play on the half-turn worked to his advantage against decidedly meagre opposition, shifting away from the likes of Lee Wallace and Scott Brown with ease.

Only Dier (four) made more successful tackles than Lallana (three), while only Southgate’s centre-backs, Cahill (90.5%) and John Stones (94.4%) registered a higher passing accuracy (88.1%), with the 28-year-old performing with composure, confidence and a real vibrancy. Operating as England’s lone striker, Sturridge looked to stay up top whenever possible, working off the shoulder of Scotland centre-backs Christophe Berra and Grant Hanley.

The 27-year-old benefited hugely from the presence of Sterling, whose persistence helped craft his opening goal—a stooping header following a driven Walker cross on 24 minutes.

He was a constant threat in the Scotland penalty area, and drifted wide whenever required to pick up the ball and interchange with Sterling and Lallana, highlighting his positive all-round game.

Southgate has shown his faith in Sturridge since taking over from Sam Allardyce, and the ex-Middlesbrough manager looks to have a great understanding of just how to utilise him.

Sturridge’s struggle to break into the Liverpool lineup this season has largely stemmed from his jarring with Klopp’s pressing system, with Roberto Firmino preferred as the Reds’ No. 9.

But deployed as a poacher, and given the license to surge beyond the Scotland defence whenever possible, Sturridge highlighted his enduring quality—his finishing ability is of the highest level.