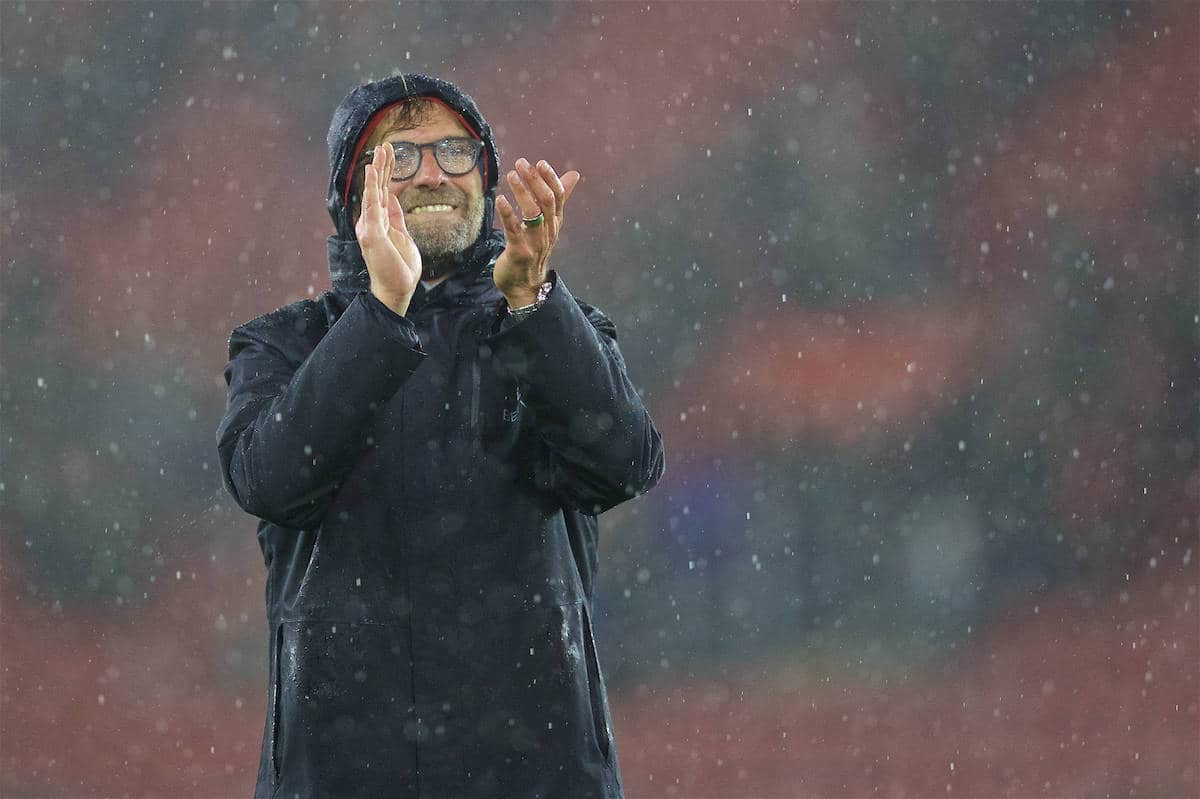 Jurgen Klopp was satisfied by the performance of his much-travelled Liverpool side as they were held to a goalless stalemate at Southampton.

The visitors created the best chances to win the game at St Mary’s but wasted several clear-cut opportunities to take three points and remain clear at the top of the Premier League table.

While Adam Lallana missed out on a return to his former club with an injury suffered on international duty, Liverpool started with Sadio Mane, Roberto Firmino and Philippe Coutinho in attack.

That was despite the fact Firmino and Coutinho had been in action for Brazil, with former Southampton man Mane representing Senegal.

Firmino missed the best chance to take the three points for the Reds, who remain top by the virtue of goals scored – but Klopp was pleased with the display of his side following on from the international fixture window.

“The performance was much better than can be expected when you think of our preparation before the game,” he said.

“With players from South America it is more difficult because they have long flights and all that stuff. We got them back on Thursday but they couldn’t train.

“Sadio came back pretty early but Phil, because of the flight he had a little ill-effect but nothing big as everyone could see today. There was no risk. It was all thumbs up.”

Firmino poked an effort wide from in front of goal in the second half, while ex-Saints defender Nathaniel Clyne headed substitute Daniel Sturridge‘s cross past the post.

Klopp was pleased his side did not lose a game they were in a strong position to win, even though a win for Chelsea on Sunday would take the Blues to the summit.

“We were much better in the second half,” he added. “It was a really good performance against a good side, Southampton are a well-organised side and I think they adapted their style to our strengths.

“We had enough chances to win the game, especially in the second half, our reaction was really good and the body language was better.

“I am fine with the performance, we could and maybe should have scored, that is how football is and many times in my life we have lost games like this, when you are much better and have more chances, but we didn’t because we stayed concentrated.” Southampton boss Claude Puel insisted his side did not change their approach to counteract the attacking threat of their opponents and was pleased to return from the international break with a strong display after losing at Hull a fortnight ago.

“We played a very good team with good players,” he said.” It was important to keep the organisation, they score lots of goals and it is very difficult to develop our game. I think today we won one point when we lost three points in our last game.

“It is not our tactic (to defend), it is just that we played a very good team. They have good, physical players who are also technical and they have a good spirit.

“It was important to take this point because we play many games. I am happy with the attitude and the spirit among my players.”

Saints failed to get a single shot on target in the game, with Charlie Austin’s second-half header wide of goal the closest they came.

And Puel was again left praising the impact of defender Virgil van Dijk, who has shone in most games this season.

Asked about another superb display for the former Celtic man, Puel replied: “Yes but he is in every game, it is not a surprise, it is not amazing. Since the beginning of the season Virgil has been excellent.”