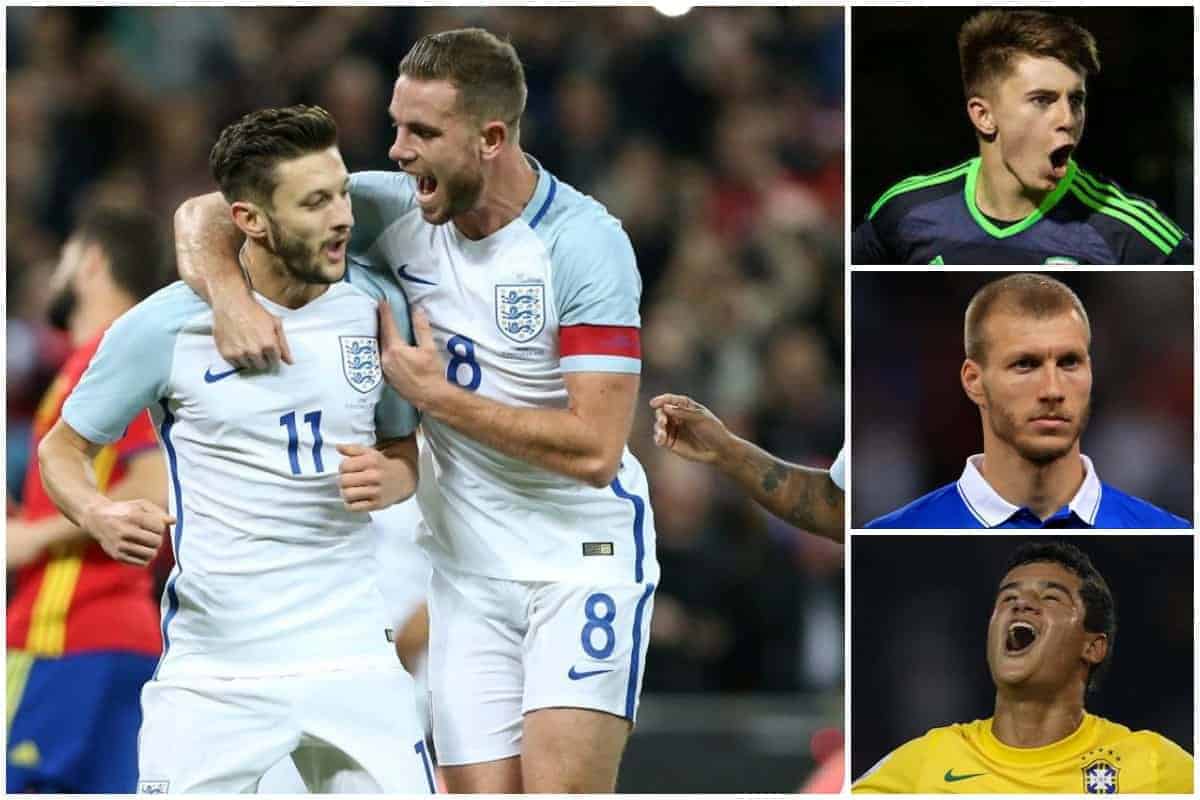 England’s draw with Spain and Brazil’s win over Peru rounded off a mixed international break for Jurgen Klopp‘s Liverpool stars.

Klopp saw 12 senior players, two loanees and a clutch of youngsters depart for duty in the final break of 2016, before attention can return to the Reds’ Premier League title bid.

Four Liverpool internationals were on the scoresheet for their respective countries before the weekend, with three netting in the remaining fixtures.

Unfortunately, Lallana was forced off through injury midway through the first half, though it is not believed to be a major problem for the 28-year-old.

Meanwhile, Philippe Coutinho played 86 minutes of Brazil’s 2-0 win over Peru on Wednesday morning, as goals from Gabriel Jesus and Renato Augusto sealed the victory, with Roberto Firmino an unused substitute.

It was a night to forget for Ragnar Klavan and Estonia on Sunday, as Belgium ran riot at the King Baudouin Stadium, sealing an 8-1 victory, with Dries Mertens scoring a hat-trick.

A wholly disappointing fixture from a Reds perspective, Klavan helped Mertens on his way by turning in the Napoli midfielder’s shot on 64 minutes, while both Simon Mignolet and Divock Origi were unused substitutes. Elsewhere on Sunday night, Georginio Wijnaldum‘s Netherlands recovered from a half-time scare to secure a 3-1 victory away to Luxembourg.

After turning out at right wing-back in the previous 1-1 draw with Belgium, Wijnaldum played in a three-man midfield at the Stade Josy Barthel, and came close to scoring after just 13 minutes.

There was disappointment for Sadio Mane on Saturday afternoon, as Senegal fell to a shock 2-1 defeat to South Africa in their World Cup qualifier.

Mane almost scored with a header in the first half, and played a key role in a second-half fightback, with a hand in Cheikh N’Doye’s strike to reduce the deficit, but the Lions of Teranga were unable to find an equaliser late on.

Neither Danny Ward or Lazar Markovic were involved in Wales’ 1-1 draw with Serbia on Saturday night, both remaining on the bench as Aleksandar Mitrovic cancelled out Gareth Bale’s opener.

On the youth international stage, Marko Grujic started in the Serbia U21s’ 1-0 defeat to the Norway U21s on Tuesday.

Though despite disappointment on the night, the Young Eagles sealed their place at next summer’s European U21 Championship in Poland.

After scoring in an eventual 2-1 defeat to South Korea U20s last week, Ovie Ejaria played the final 19 minutes as the England U20s won 4-1 against the Iran U20s on Saturday.

Elsewhere, following their 2-1 loss to the Czech Republic U21s in their first clash of a friendly tournament in La Manga, Corey Whelan and the Republic of Ireland U21s fell to another defeat on Tuesday, this time losing 3-2 to the Slovakia U21s. Both Trent Alexander-Arnold and Ben Woodburn were involved in an exciting encounter as the England U19s lost 3-2 away to the Wales U19s on Saturday, with Alexander-Arnold scoring twice from right-back and Woodburn playing 89 minutes in a fierce rival clash.

Alexander-Arnold added his third of the break with a penalty in the Young Lions’ 2-0 win over the Greece U19s on Tuesday evening, with Woodburn netting twice as Wales thrashed the Luxembourg U19s 6-2.

Finally, Kamil Grabara returned to Melwood for training on Monday morning after a deflating spell with the Poland U18s.

Firstly, the goalkeeper played the full 90 minutes in a 2-0 loss to the England U18s on Thursday, and then sat out as Milosz Mleczko took his place in a 2-0 win over the France U18s on Saturday.