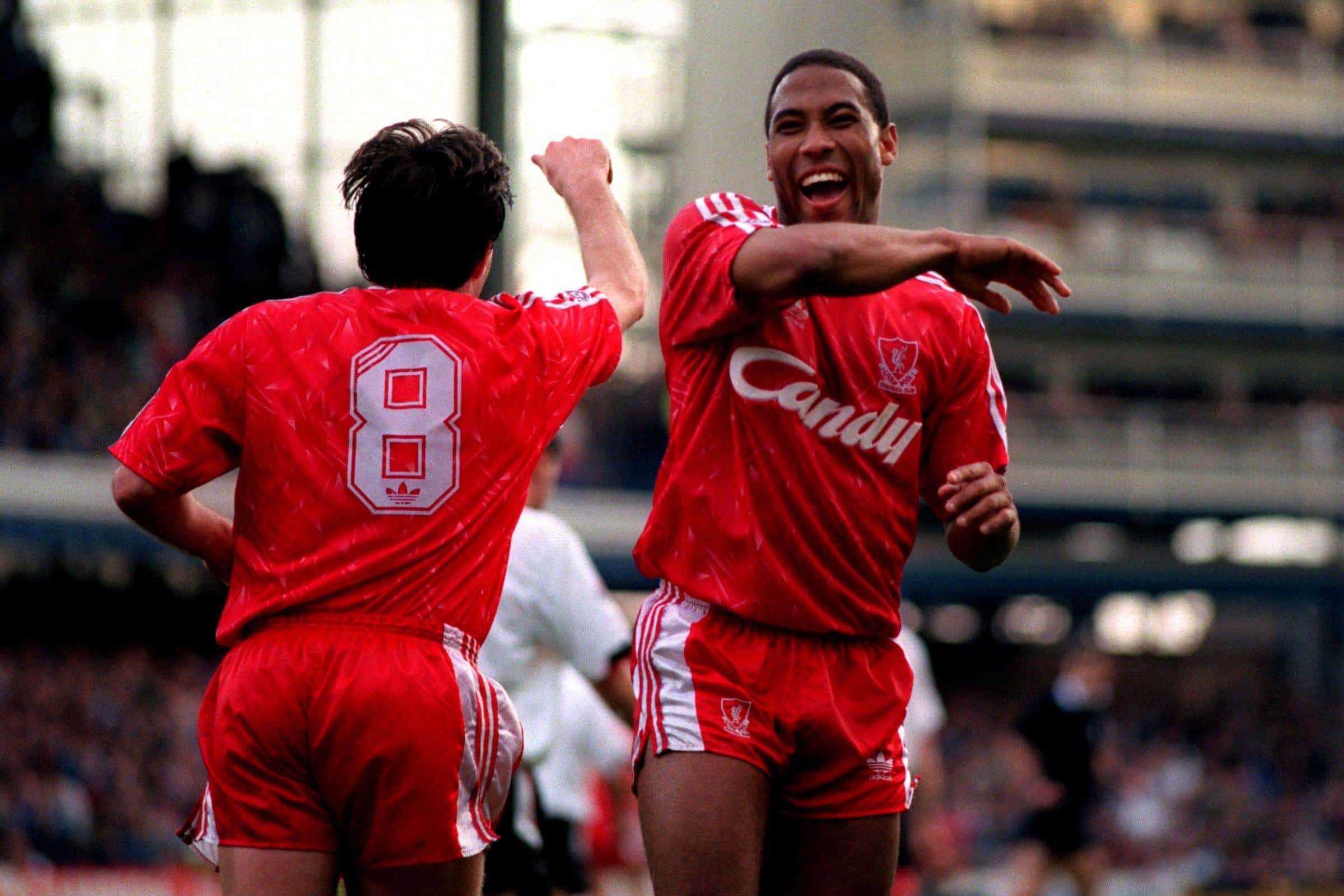 This week’s classic match feature transports us back to one of the most memorable football periods of my life, writes Jeff Goulding; the 1987-88 season.

Here we will take another loving peak at the most flamboyant Liverpool side in the history of the club. This was the age of Barnes, Beardsley and Aldridge, when Anfield witnessed a kind of breathless, mesmeric football that would effortlessly sweep aside all who stood in its way.

In a footballing sense the city of Liverpool sat in the epicentre for most of the eighties. Both our teams could terrify the rest of the first division and they shared the league title between them for most of the decade. Liverpool won the championship six times and the Blues won it twice. By the end of 1987 the Reds, always synonymous with relentless success, also became known as the great entertainers.

The year got off to a freezing start, with Britain plunged into sub-zero temperatures. Merseyside too was engulfed in ice and snow. The 1986-87 season was entering the home straight. Liverpool were once again locked in a battle for the title with neighbours Everton and would reach the League Cup final against Arsenal in the February.

Ian Rush was a goal machine, scoring 40 goals in all competitions and boasting a record of never finishing on the losing side in any game where he had been on the score sheet. Sadly he would not be able to hold onto that record. In the cup final Rushy put Liverpool into the lead, only for Charlie Nicholas, a player who had spurned the Reds’ advances earlier to move to the bright lights of the capital, netted twice.

The Gunners won the cup and Liverpool would also end the season as runners up in the league. Everton claimed their ninth and last championship. Rush left Liverpool in the summer and joined Juventus, in what was seen as an act of reconciliation between the two clubs, after the horror of the Heysel Stadium disaster. The Italians would pay £3.2 million for him, a British record transfer fee at the time. I still think they got him on the cheap.

While the the city of Liverpool had started the year frozen in the depths of winter, nothing would chill Scousers more than the re-election of Margaret Thatcher in the summer. Merseyside was starting to feel like an independent state by this point and most of us could barely forgive the rest of the country for returning what we saw as a monster to office. I know now that many other areas felt the same, but not back then.

The jobless figures stood at three million nationally and in parts of Liverpool whole communities were out of work. In Norris Green, where I grew up, unemployment was destroying the fabric of the community. Football was an escape for sure, but it was also about pride. To me winning trophies, even when the Blues did it, felt like the whole city was putting two fingers up to a government that didn’t give a shit about us.

Whatever they did to trample the place down, our teams just kept saying “look at us. We’re still here and we’ll beat whoever you put in front of us.” Our fans would turn up in the capital year after year to show them that Liverpool was and always will be a great city. A winning city, at least in a sporting sense. The Reds had made a habit of replacing one great talent with another for decades. In John Aldridge they had a ready made replacement for Rush. In the summer of 87 Kenny added Ray Houghton, who had played with Aldo at Oxford United, for £825,000. But it was the signing of John Barnes, from Watford, for £900,000 and Peter Beardsley, from Newcastle, for £1.9 million that took Liverpool to a new level.

Dalglish was still registered as a player, but his appearance were becoming less frequent. This allowed him to focus on management. He would prove equally as potent from the dugout as he ever was on the pitch.

Liverpool simply blew teams apart in the 1987-88 season. They won 11 games by four or more goals, including the 5-0 demolition of arch rivals Nottingham Forest. Football legend Tom Finney would describe that game as ““the finest exhibition I’ve seen the whole time I’ve played and watched the game. You couldn’t see it bettered anywhere, not even in Brazil.”

By January 1988 Liverpool were 13 points ahead at the top of the table. Much to the annoyance of Everton fans, ‘champions’ pendants went on sale in the city a full four months before the season was over. But our confidence was far from misplaced. After all this was a season that saw Liverpool go on a 29 game unbeaten run, ended only after a painful a 0-1 Derby defeat at Goodison.

It proved scant consolation for Everton though, as the Reds would go on to clinch the title with four games to spare on the 23rd April. It was Liverpool’s 17th Championship and their 9th in fourteen years. The Blues would finish 20 points behind, trophyless in 4th spot.

But before all that, let’s take a step back to a fixture that took place against Watford at Anfield on the 24th November 1987. John Barnes was facing his former club and he would show them absolutely no mercy. The Reds had already crushed superior opposition and a team languishing in 19th place would surely be like lambs to the slaughter.

If you wanted to get into the game back then, you had to get there early. The gates would frequently shut with thousands still queuing outside. I used to get to the ground around midday to ensure I got my spot on the Kop. I always headed for the centre, near the two big pillars, as that was where all the singing seemed to start. I’d meet my mates there, but by the end of the game we’d end up scattered to the four corners of the old terrace.

Liverpool’s previous three games had proved difficult. They’d drawn 1-1 away to Wimbledon and Manchester United, followed by a goalless draw at home to Norwich just six days earlier. We really needed to get back on track and most of us felt this would be the game where we did.

Football never goes to script though and were treated to a frustrating first half, in which the Hornets had the better chances. There was a suspicion that the Reds were beginning to believe their own hype and complacency was setting in. One reporter, writing for the Times, claimed the Reds were a group of “players who appeared to be suffering some form of adverse reaction to the constant claims that all they have to do for maximum points is turn up at the appropriate venue at the right time.”

This is how that same reporter summed up these opening exchanges, “As the first half neared its anticlimax, a police message conveyed to a near silent crowd proclaimed the commencement of ‘Operation Anfield’ – an annual security exercise. The game was so poor that it was in need of major surgery and not simply a minor operation.”

Kenny clearly wielded his scalpel in the half-time team talk, because the second half could not have been in sharper contrast to the first.

Huyton-born Carol Decker, front lady of 1980s band T’Pau, was at number one in the charts with a song about brittle dreams, ‘China in your hands’. And the Watford manager’s dreams of keeping his job were about to be shattered. Dave Bassett was living on borrowed time already. He would be sacked in January 1988, a little over a month later. Watford would begin a downward spiral that would see them reach the third tier of English football within a decade.

It took just nine minutes from the restart for Liverpool to spark into life. Barnes delivered a stunning pass to McMahon, who burst through the middle and chipped the ball over the onrushing Tony Cotton, 1-0 and cue an outpouring of relief and joy. McMahon, signed from Aston Villa, had also played for Everton, but he had become an essential cog in that season’s title winning team.

Nine minutes later the Reds were two up, thanks to a deflected shot by Ray Houghton. Watford were out for the count now and before another five minutes had elapsed Barnes was once again in majestic form. He once again turned provider with a brilliant cross to Aldridge, who gleefully headed home Liverpool’s third. But the former Hornets man wasn’t finished rubbing salt in his former employer’s wounds.

On 71 minutes Barnes found himself a full 30 yards from goal and unleashed a ferocious shot that sailed past the hapless Cotton and into the Watford net. It was 4-0 and for all their lethargy in the first half, the Reds had needed just 17 minutes to destroy their opponents. Job done and back to winning ways. We left Anfield that night, with Liverpool in their rightful place at the top of the table. All was right with the world once more.

Liverpool have been blessed with some astonishingly good teams down the years. I have been lucky to see some of the best. In my lifetime the club I love has won everything in sight. I firmly believe that the glory days will once again return, but I struggle to believe that I will ever see a Liverpool team as entertaining and devastating in attack, as the one assembled in 1987-88. I am truly privileged to have seen them in the flesh.