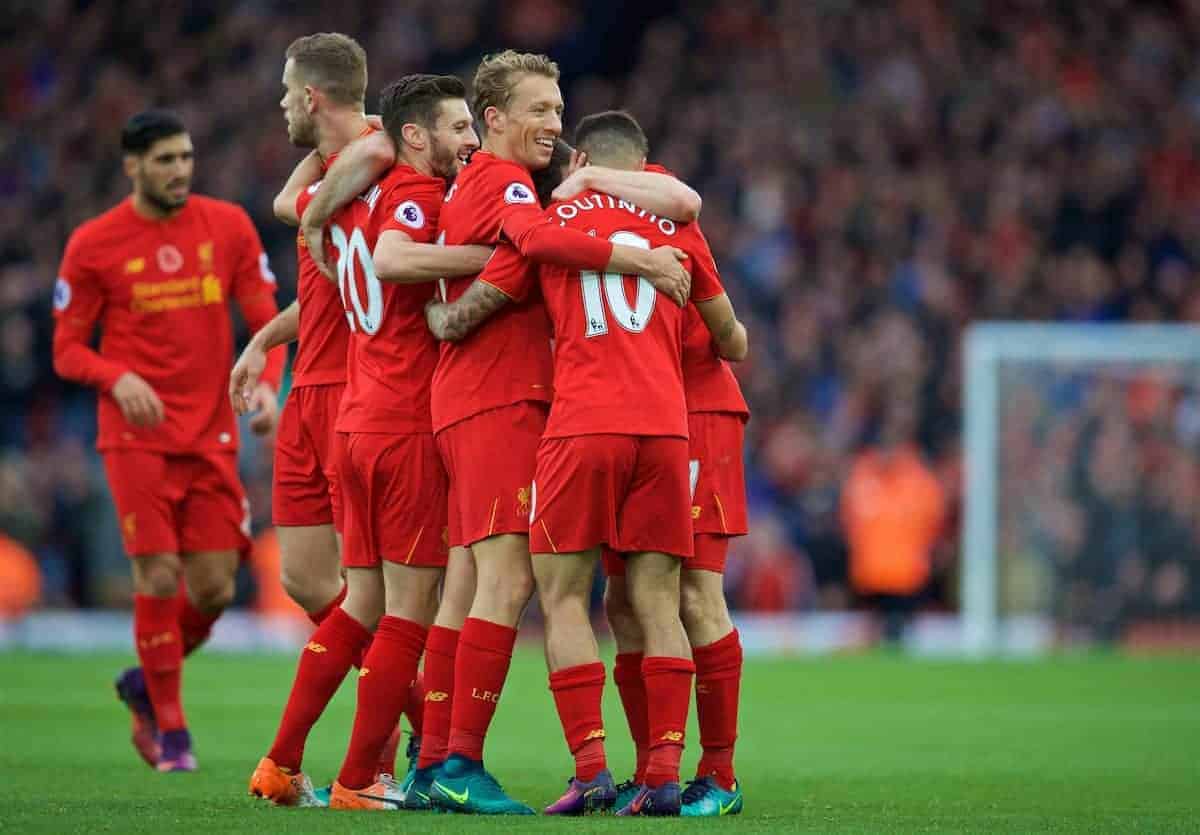 Eleven games unbeaten in all competitions, 18 games unbeaten at Anfield and looking for their fourth win in a row, Jurgen Klopp‘s Liverpool took on an impressive Watford outfit at home.

Walter Mazzarri’s Hornets headed into the clash sitting in seventh place, presenting a considerable challenge for the Reds, but they cruised by in style.

Liverpool started brightly, flowing forward in their typical attacking 4-3-3, with Firmino gifted a great chance to score following an Adam Lallana cross after eight minutes, but couldn’t direct his volley away from compatriot Heurelho Gomes.

The Reds continued to trouble the Watford defence, with Coutinho hitting the crossbar from an offside position and then skewing an effort wide of the post after cutting onto his right foot.

It was Coutinho who laid on the Reds’ opener on 28 minutes, with Mane glancing a header past Gomes following a corner routine linking up with Milner.

Coutinho then made it 2-0 shortly after, firing low into the bottom corner after some excellent flowing play in attack.

To round off a half that Liverpool had dominated throughout, Emre Can was on hand to head home an inch-perfect Lallana cross to give the Reds’ a well-deserved three-goal lead at the break.

Despite their lead, Liverpool showed no sign of stopping after half-time, with two early goals underlining their ambition under Klopp.

First up was Firmino, with the Brazilian side-footing home from close range following Lallana’s drag-back, while some perseverance from the Reds No. 11 then set up Mane for his second of the night.

At the other end, Loris Karius was forced to make three excellent saves, with the German looking to be growing in confidence after a shaky start as Liverpool’s first-choice goalkeeper.

He was beaten on 75 minutes, however, as Daryl Janmaat walked through the Reds defence to deny him his second league clean sheet.

Teenager Ovie Ejaria came on to make his Premier League debut, while fellow substitute Daniel Sturridge hit the bar twice, before Costel Pantilimon palmed the striker’s shot into Georginio Wijnaldum‘s path to seal a 6-1 triumph, with the Reds going top of the league.