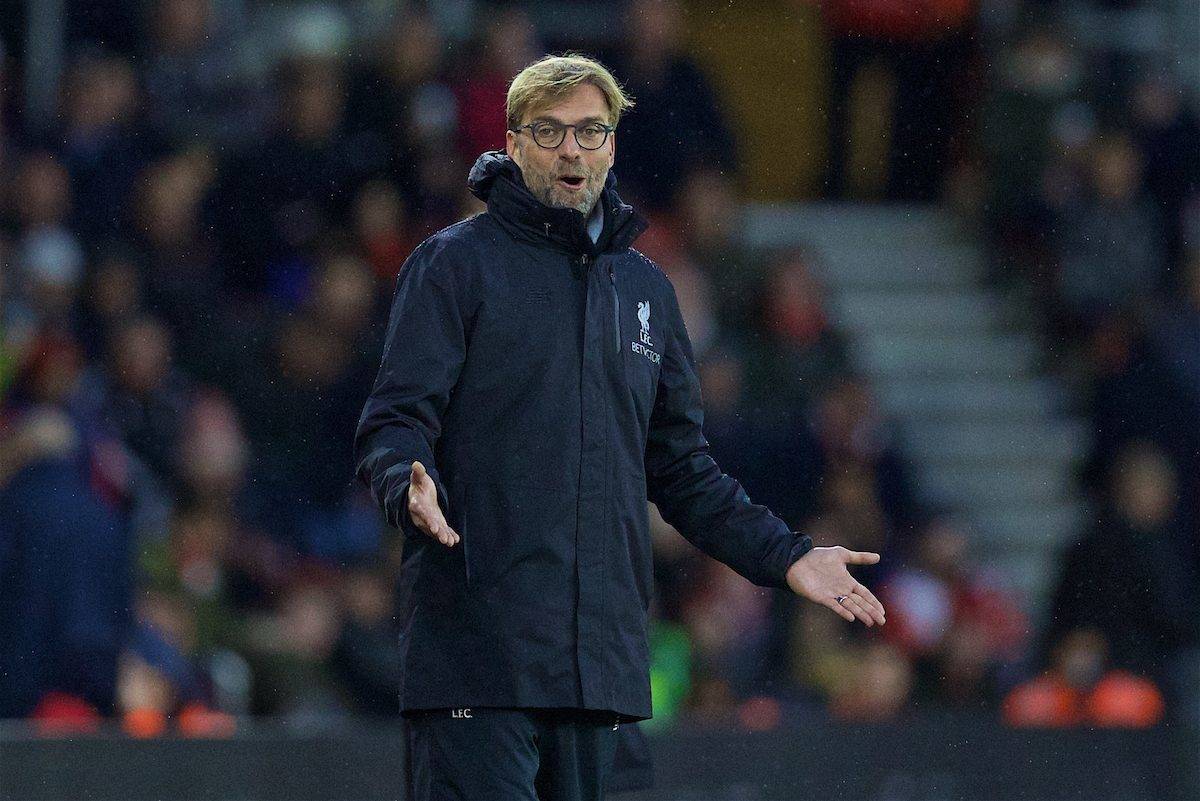 Liverpool’s frustrating 0-0 with Southampton presented Jurgen Klopp with a variety of positives and negatives to consider.

An excellent defensive display from Southampton saw the Reds held to a 0-0 draw on their trip to the south coast, as Klopp’s side relinquished their lead at the top of the Premier League table.

Sadio Mane, Philippe Coutinho and Roberto Firmino all had gilt-edged chances to score, but were thwarted by the likes of Jose Fonte, Virgil van Dijk and goalkeeper Fraser Forster.

It was ultimately a disappointing afternoon for Liverpool, with plenty for Klopp to take back to Melwood to digest along with his backroom staff.

Here are five talking points from St. Mary’s, including a post-international break malaise.

Despite injury to Adam Lallana, Klopp named three ex-Southampton players in his starting lineup at St. Mary’s, with Dejan Lovren returning after missing the 6-1 victory over Watford on November 6.

The Croatian, who was roundly criticised for his efforts to force a move to Merseyside back in 2014, was given a furious reception from the home supporters, with his every touch jeered and several expletive-laden chants aimed his way.

But alongside Joel Matip, Lovren produced a stoic defensive showing, facing up well against the combined attacking threat of Charlie Austin and Nathan Redmond.

Matip continued his excellent run against physical centre-forwards in nullifying Austin both in the air and on the ground, while Lovren did a great job of mopping up loose balls as a limp Redmond chased them down.

After the game, Lovren made his way to the travelling Kop to present a supporter with his No. 6 shirt, with his efforts despite a testing atmosphere highly commendable. Klopp used his pre-match press conference to highlight the importance of Liverpool preserving their strong form after the international break, saying “the challenge is now to find a way together immediately, and to come back on the right track, our track.”

But despite the Reds carving open their opposition on a number of occasions, there was a clear fatigue within Klopp’s squad, lacking the sharpness and attacking verve that has made them such a formidable prospect in 2016/17 so far.

Most notably, Coutinho looked largely off the pace, with the 24-year-old a surprise inclusion in Klopp’s starting lineup after starting both of Brazil’s clashes against Argentina and Peru—returning late on Wednesday—and a midweek injury scare.

Elsewhere, both Mane and Firmino spurned excellent chances when one-on-one with Forster, with Fonte and Van Dijk showcasing more urgency in their efforts to quell Liverpool’s forward charge.

With Liverpool having 15 shots on goal to Southampton’s three, it can certainly be considered two points dropped at St. Mary’s, and the Reds’ fatigue contributed to this disappointment.

With the likes of Coutinho and Mane visibly tiring, and Liverpool struggling to find the all-important opener as a fraught second half dragged on, that Klopp failed to make a substitute until the 78th minute was perhaps disappointing – especially with the quality of subs at his disposal.

The German certainly had a strong selection to call upon, with Alberto Moreno, Marko Grujic, Divock Origi and Daniel Sturridge all on the bench and arguably capable of changing the game.

He eventually replaced Emre Can with Sturridge, and the No. 15 made some promising movements in the final third—most notably setting up Nathaniel Clyne, whose header drifted just wide of the post—but his introduction came too late in the day.

Origi was also brought on, but as has been the story of his season so far, the Belgian was given only a handful of minutes to make an impact—and, predictably, he failed to do so.

Klopp has repeatedly stressed the need for patience in difficult situations such as this clash, but the manager could certainly have moved more quickly in altering his setup in search of victory.

Unlike in 2013/14 and 2008/09 when the sub options were the likes of Iago Aspas and Victor Moses, and Nabil El Zhar and David Ngog, Liverpool’s subs this season are strong – but only if used correctly.

Prior to the clash, Klopp took time to praise Southampton’s scouting department, with four ex-Saints in his squad, highlighting their ability to maintain consistency despite regularly losing their best players in the transfer market.

After sanctioning the £30 million signing of Mane in his first summer with the Reds, Klopp could look to plunder the Southampton ranks further in future transfer windows.

Most notably, Van Dijk stands out as a prime candidate for Liverpool, with the Dutchman producing an emphatic showing at centre-back—and while Lovren was in great form himself, the prospect of Matip and Van Dijk pairing up at the back is a mouthwatering one.

Elsewhere, the likes of Piere-Emile Hojbjerg, Sofiane Boufal and Nathan Redmond stand out as ones to keep an eye on, while Oriol Romeu’s impressive hatchet job on Coutinho certainly underlined the Spaniard’s merits.

With the perception of Liverpool’s business relationship with Southampton shifting, further signings from the south coast would likely be applauded.

On another day, against a less determined defence, Liverpool could have walked away from Saturday’s clash with a considerable victory.

But having failed to beat Forster in torrential rain in Southampton, the Reds’ lead at the top of the Premier League was reduced—as Manchester City secured a 2-1 victory over Crystal Palace.

Liverpool’s next clash comes against Sunderland on November 26, with the importance of sealing victory at Anfield underlined as their title rivals’ fortunes improve; it will prove a difficult task, too, with David Moyes’ side having sealed a 3-0 win over Hull City on Saturday afternoon.

If Klopp’s side are similarly productive in front of goal next weekend, however, another three points seem likely—with the Black Cats conceding 21 goals in 12 games so far this season.