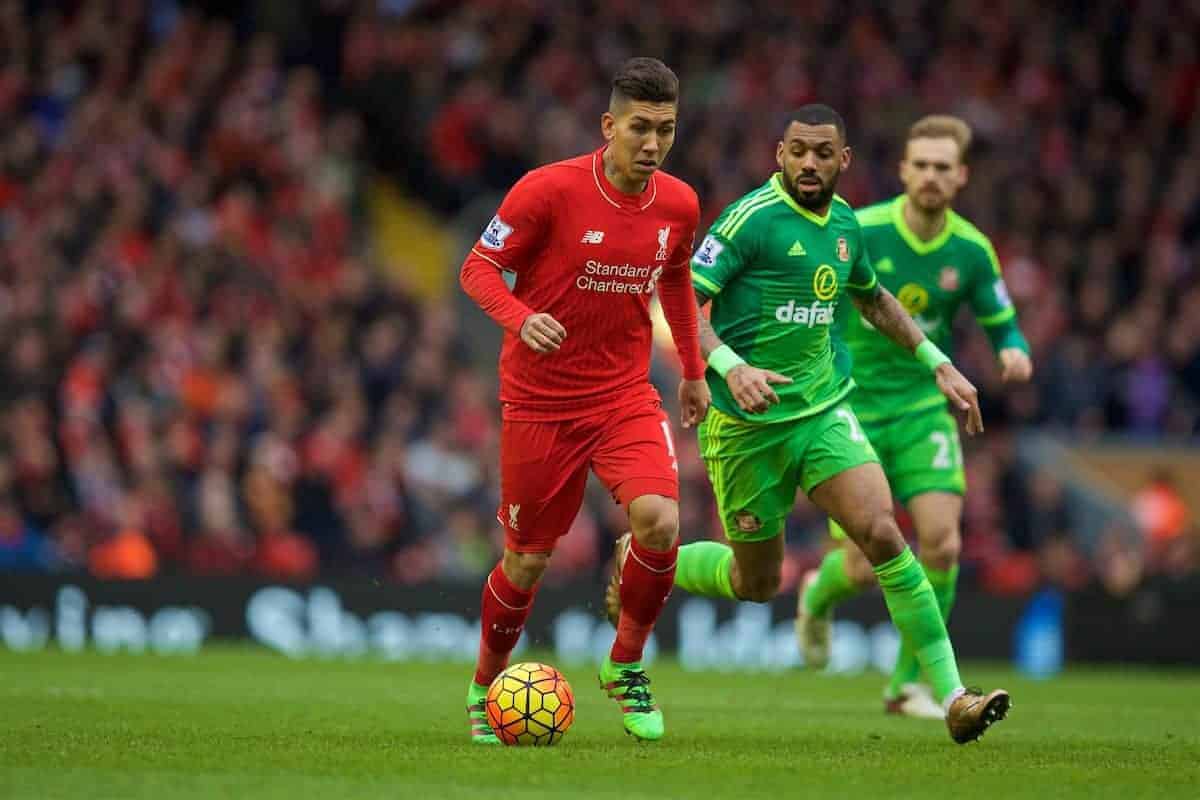 Liverpool will attempt to get back to winning ways against relegation candidates Sunderland on Saturday, bringing an old foe back to Anfield in the shape of David Moyes. Here’s everything you need to know about the Reds’ opposition.

Away: Won once, drawn once, lost four.

Until recently, there was no particular approach—Sunderland were a mess. Hugely open at the back, industrious without any semblance of regular patterns of movement in attack and not too clever at keeping hold of the ball either; it was difficult to see what or where David Moyes was trying to improve first.

Sunderland lay five across the midfield, nominally a 4-2-3-1 or similar but all too often asking all five to form a barrier to the defence and only countering to offer support to lone striker Jermain Defoe.

Even now, after two wins in a row (their first league victories this season), Sunderland are still ranked in the bottom three of the Premier League for average possession, shots per game, pass success rate and shots on target per game, averaging less than three of the latter stat. They also concede the third-highest shots per game count. Defoe remains a man who can score off a single chance, and he more or less has to in this team. Aside from the striker, it’s the wide men who bustle forward whenever possible, linking with Defoe in sporadic fashion and often intent on solo runs deep into the final third.

Admirable, and at home they get the crowd going, but Duncan Watmore and Victor Anichebe should not be allowed, nor capable, of doing this with regularity at Anfield.

One note for the Liverpool defence: Sunderland haven’t scored a single goal off set pieces (excluding penalties) this season. Keep it that way, ok?

Two wins has given the Black Cats confidence, but they’re still a poor side in poor condition this term. The midfield is simply a barricade, there to destroy and intercept, and Liverpool will have to move the ball around quickly to force the trio out of shape. Paddy McNair had won a spot in midfield, but has torn his ACL, so changes will be made.

A high tempo, good movement and a clinical edge, and there should be no stopping Liverpool in this game.

Jordan Pickford is a talented young goalkeeper and he’s likely to have a busy day, but the Reds have often found down the years that an inspired stopper is the most frustrating opponent possible. Good reflexes, brave in one-on-ones and reasonably quick to assess dangerous passes behind the defensive line, Pickford is a very strong last line of defence for Sunderland.

Liverpool’s key is simply to breach that defence first, and not get frustrated, so whoever is picked at centre-forward after the goalless draw at Southampton has to take the biggest responsibility, be it Roberto Firmino or Daniel Sturridge.

McNair’s injury is likely to mean Steven Pienaar comes back into the lineup, while centre-back Papy Djilobodji was sent-off in the win against Hull and will be suspended.