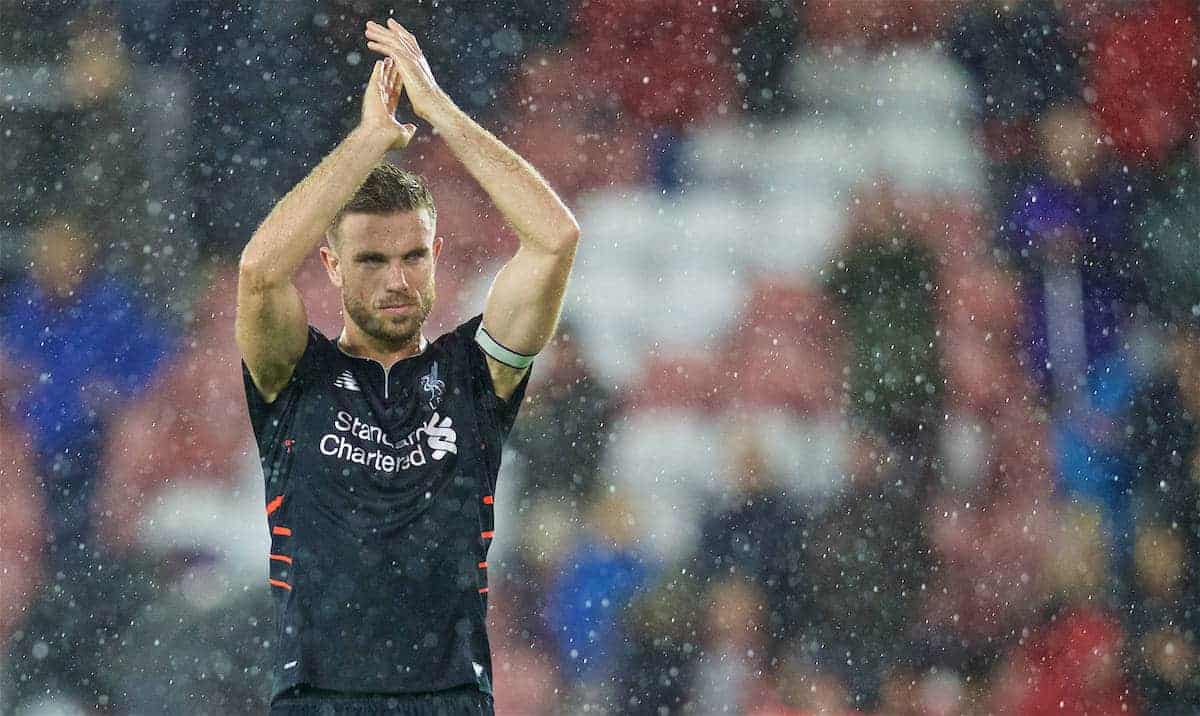 Liverpool were somehow held to a frustrating stalemate by Claude Puel’s Saints, surrendering their lead at the top of the Premier League table.

The Reds were their own worst enemies on the south coast as they passed up a number of glorious chances, with none of Roberto Firmino, Philippe Coutinho, Sadio Mane or Joel Matip managing to convert opportunities.

Jurgen Klopp can be pleased with the performance having seen his Reds dominate practically all 90 minutes at St Mary’s, but he will no doubt have been left frustrated by their inability to grab a winning goal.

However, a point against a dogged Southampton side on return from the international break is certainly not to be sniffed at, and here is how the media assessed the stalemate. Reporters, as expected, bemoaned Liverpool’s wasteful finishing, but most were left encouraged by various aspects of an impressively dominant performance.

“This really was a battering, a performance of sustained punishment that repeatedly showcased the creativity of Liverpool’s squad but none of the clinical competence that has been their strong suit this season.”

“To their credit, the Merseysiders did not play out of frustration nor desperation and, while they kept pushing, with even the centre-backs advanced, they were steely at the back.”

However, the BBC’s Jack Skelton thought the Reds lacked their usual attacking verve, and attributed that to the international break:

“Perhaps affected by the international break, Liverpool lacked the fluency that has characterised their impressive start to the season.”

“Make no mistake, however: Lallana was as much of a miss here as he was in the opening hour of the draw against Manchester United at Anfield.

“Lallana is a knitter, yes; he does plenty of good work off the ball. That was lacking at times at St Mary’s, with the press not quite as sharp and midfield not quite as structured.” “Instead, Liverpool felt their way into this game; a different approach to the one that has brought success.

“Liverpool looked fresher, fitter, hungrier in the second half. It wasn’t quite rope-a-dope–there are no dopes on either side, for starters–but the Reds backed themselves to start softly and finish strongly.”

The Telegraph‘s Chris Bascombe drew positives from Liverpool’s improved battling characteristics, feeling this was a game they previously would have collapsed in:

“This was a fixture they’ve lost plenty of times, and the kind of feisty game they’ve failed to compete in on many of the occasions when promising campaigns took a turn for the worse when the frost bit.”

Bascombe was also among those that felt Southampton’s ultra-defensive setup proved how big a challenge facing Liverpool now is:

“That Southampton felt such caution was their chief route to success on their own turf demonstrated both wisdom and fear from Claude Puel. This is Liverpool’s challenge for the foreseeable future; when Klopp’s side come to town the barricades are erected and defences re-fortified.” Reporters offered mixed views on whether this was a point gained or two points dropped for Klopp’s side.

Al-Samarrai felt it was a case of the latter:

“How exasperating this must have been for the German, who watched Liverpool demolish this Southampton side and leave for home with only one soggy point to show for it.

“A point at Southampton is, of course, a good result, but given Liverpool’s aims this season and the way this game was played, it should have been more.”

Walsh feels the Reds’ next results will ultimately determine how useful a point this is:

“This is a good point, and will remain so–but only if it is followed like the two draws [against Tottenham and Man United] were.”

Bascombe thinks Liverpool’s current position outweighs any negatives with only taking one point:

“For league leaders, any draw will come attached with the description ‘two points dropped’ and while that may be technically correct such a negative connotation does not reflect Liverpool’s current direction of travel.”

However, the Liverpool Echo‘s James Pearce thinks the feeling of disappointment despite earning a solid draw shows how far Liverpool have come:

“The fact that Liverpool departed crestfallen with a share of the spoils, having extended their unbeaten run in all competitions to 13 games, underlined just how far they have come since their previous trip to St Mary’s in March.

“Back then the Reds capitulated, carelessly tossing away a 2-0 lead and slumping to defeat. Now there is much greater resilience as well as quality.”

“This result should do little to dent the growing belief that this could be Liverpool’s season.”

Reporters gave their verdicts on individual performances, with praise for Matip and Dejan Lovren, and with some focussing on disappointing showings from Liverpool’s attacking trio.

Walsh praised Lovren’s display on an afternoon he remained impressively composed despite receiving torrents of abuse from the home fans:

“Alongside the majestic Joel Matip, who looks like being part of the biggest robbery since Ronnie Biggs caught the train, Lovren was commanding; he did everything a Liverpool centre-back would be expected to do in such a fixture.

“He used the ball well, displaying the innate ability of knowing when to play shorter, sharper passes, and when to launch it from danger.”

Pearce praised Matip, and feels he continues to prove a magnificent signing from Klopp:

“Matip delivered another commanding performance as Charlie Austin barely got a kick.

“His signing on a free transfer from Schalke is increasingly looking like one of the finest pieces of business Liverpool have done in the Premier League era.”

“Games such as this one can often be problematic for defenders, as it’s easy to fall asleep and get caught out on the counterattack. But that didn’t happen, because Matip and his defensive partner Dejan Lovren were both switched on throughout and ensured Southampton‘s forwards were complete non-factors in the game.”

Meanwhile, Pearce felt Liverpool’s front three struggled, attributing that to their travels over the international break:

“Unsurprisingly, the front three, who have wreaked havoc so far this term, weren’t at the peak of their powers following their long-haul flights back from international duty.”

“Even on an afternoon when chances were limited and space was tight, he made a constant nuisance of himself.”

And discussing Klopp’s afternoon, Usher questioned Klopp’s use of substitutions at St Mary’s:

“The manager’s in-game substitutions were also fairly obvious, but they came far later than they should have. Daniel Sturridge should have replaced Emre Can much earlier than he did, and what was the point in sending Divock Origi on in stoppage time?”