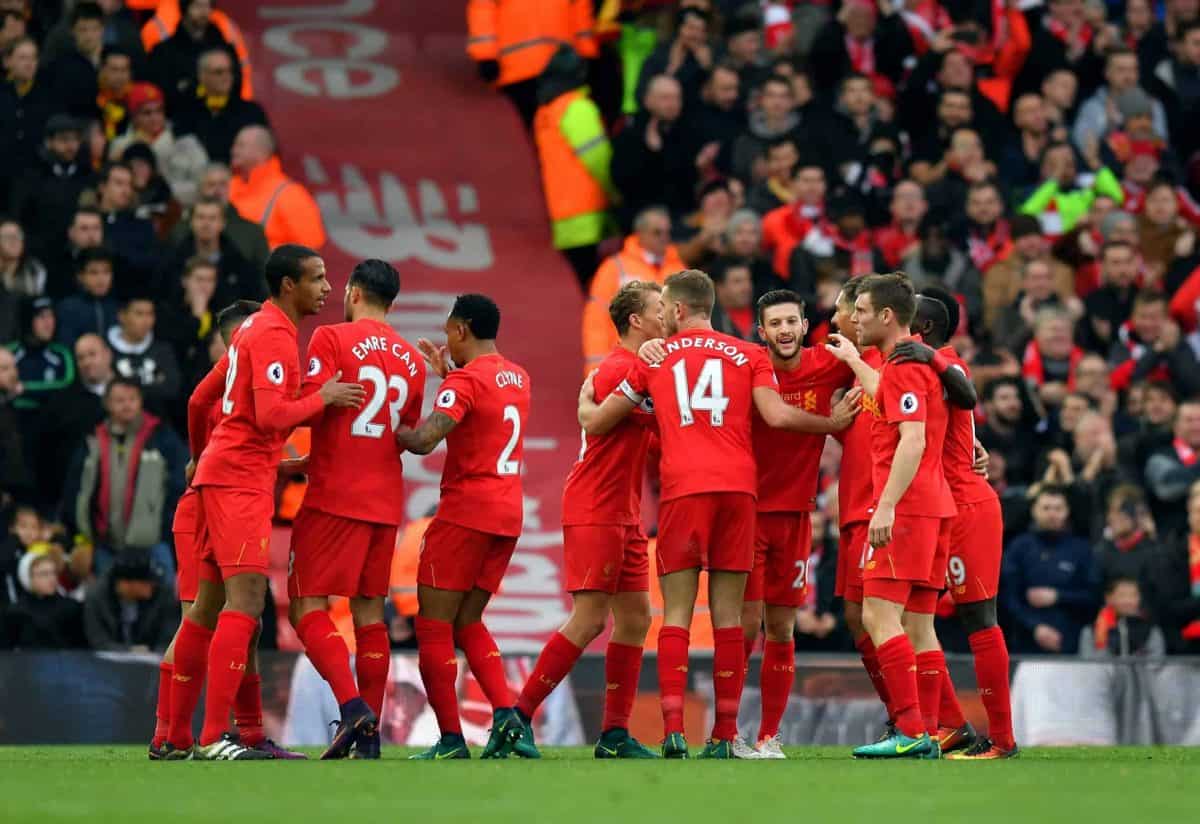 A scintillating display of attacking football gave Liverpool a convincing win which saw them climb to the top of the Premier League table.

It was the performance of a team high on confidence and one in which every player contributed to an impressive dismantling of their opposition.

Watford had no answer to Liverpool’s free flowing attack, and it’s no exaggeration to suggest the margin of the win could have been even greater.

Here are some points of note to take from the game as we head into another international break. Liverpool are now unbeaten at home in 19 games. But on top of being undefeated in this time, they are regularly dominating teams at Anfield.

Even if the scoreline doesn’t always suggest this, the flow of the games and the amount of chances they create does.

Jurgen Klopp‘s side have failed to win just once at Anfield since the opening of the new Main Stand, and have outscored their opponents by 19 goals to 5.

The only blip was against Jose Mourinho’s Manchester United, who set up their team as if a trophy for not losing would be given out at the end of the game.

If a team is to challenge for the title, or at least cement a place in the top four, then home form can make all the difference, particularly against the teams you are expected to beat.

Continue in the current vein at home, and Liverpool give themselves every chance of securing a place in next season’s Champions League.

And if you’re doing that, you may as well challenge for the title too. Klopp has set his side up using a 4-3-3 formation for much of this season, but as each game has passed the shape has become more difficult to define.

Players drift from their positions and fill in for each other as attackers perform defensive tasks, and defenders help build the attack.

The fluidity born of this free formation results in some of the best attacking football in the league.

Unlike the 2013/14 season when Liverpool’s attacking prowess relied on a few key individuals, this side have contributors all over the park.

A lot of the goals they score involve several attackers and midfielders before the ball hits the back of the net, and this was evident today as Mane, Coutinho, Firmino and Lallana were regularly involved in this goal glut.

Watford had kept three clean sheets in a row prior to today, but they couldn’t handle this red hot attack.

Emre Can Cements His Position

Having missed a good chunk of the early part of the season due to injury, it looked like an uphill struggle for Can to return to the starting XI.

In recent weeks, however, he’s gone from the fringes to become a fixture in the side in his vital midfield role.

An injury to Georginio Wijnadum may have given him a way in, but it’s likely that once he returned to match fitness he would have found a regular place in the side regardless.

He’s managed to get his name on the scoresheet in the past two games, which is something the Dutchman struggled to do despite being presented with similar chances.

Even when Wijnaldum was brought on in the 63rd minute, Can remained on the pitch, and his team-mate managed to get in on the goalscoring action too.

Another line of thinking is that Can offers more against teams who are a threat from set pieces but, this being the Premier League, this accounts for the majority of games anyway.

The Reds Use Their Heads

From Joel Matip dealing with Troy Deeney and Odion Ighalo, to the goals scored at the other end, Liverpool are becoming a threat in the air.

Gone are the days of aimless lofted balls at a target man, and instead we see well measured lofted passes into the right areas.

Both Matip and Dejan Lovren have scored headed goals in recent weeks, and today Mane and Can got in on the act.

Meanwhile, Firmino has developed into not only the best player in the league, but also one of its best target men, winning balls in the air to hold up play as well as on the ground.

Its just another weapon in Liverpool’s attacking armoury, and one which comes in handy when defending against the likes of Troy Deeney too!

Into The Break In Good Shape

Liverpool head into this second international break in a good frame of mind and with a good amount of players able to rest and recover.

Even those players who do travel to play for their country will no doubt be looking forward to returning to Melwood in a week or so, and may even be telling their international team-mates how good it is to play for Liverpool!

The fixtures when they return are Southampton (A), Sunderland (H), before they face Leeds United at Anfield in the League Cup.

After that, it’s a trip to Bournemouth, West Ham (H), and Middlesborough (A), before the Merseyside derby at Goodison Park on Monday night, December the 19th.