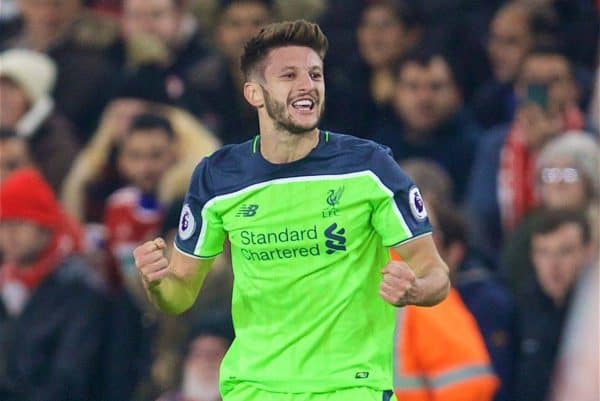 Adam Lallana the 2-goal maestro – Liverpool fans’ Man of the Match vs. Middlesbrough

While Liverpool’s 3-0 victory over Middlesbrough was the result of an excellent team display, Adam Lallana stood out above the rest.

The 28-year-old scored a brace, with Divock Origi adding another, as the Reds got back to winning ways on the road, beating Middlesbrough for the first time since 2002.

Despite Jurgen Klopp dropping first-choice goalkeeper Loris Karius, and injury depriving him of Joel Matip, Emre Can, Philippe Coutinho and Daniel Sturridge, the Reds were in excellent form at the Riverside Stadium.

Lallana was named This is Anfield’s Man of the Match at full-time, and with supporters also providing their ratings, the England international received further acclaim.

The midfielder was rated at 9.2 out of 10, mirroring his comments after the game on Liverpool producing a near-perfect performance.

Origi, who set up Lallana’s second of the night with a low-struck cross, was given a rating of 8.2.

Meanwhile, Karius’ replacement, Simon Mignolet, was given the vote of confidence from the travelling Kop, rated at 8 after a strong showing between the sticks.

With only two of Klopp’s starters awarded a rating below 7, Liverpool’s overall quality was clear.

Georginio Wijnaldum (6.8) and Roberto Firmino (6.7) were Liverpool’s lowest-rated players on the night, though their contribution was still of great importance.

Liverpool now prepare themselves to take on Everton in Monday night’s Merseyside derby at Goodison Park.

With both Coutinho and Sturridge still likely to miss out, Klopp will be hoping for more heroics from Lallana to add the cutting edge to another strong overall performance from the Reds.

The No. 20 has already scored six goals in 15 games this season, one fewer than his tally of seven in 49 last time out, with his influence on Liverpool’s on-field success growing by the game.