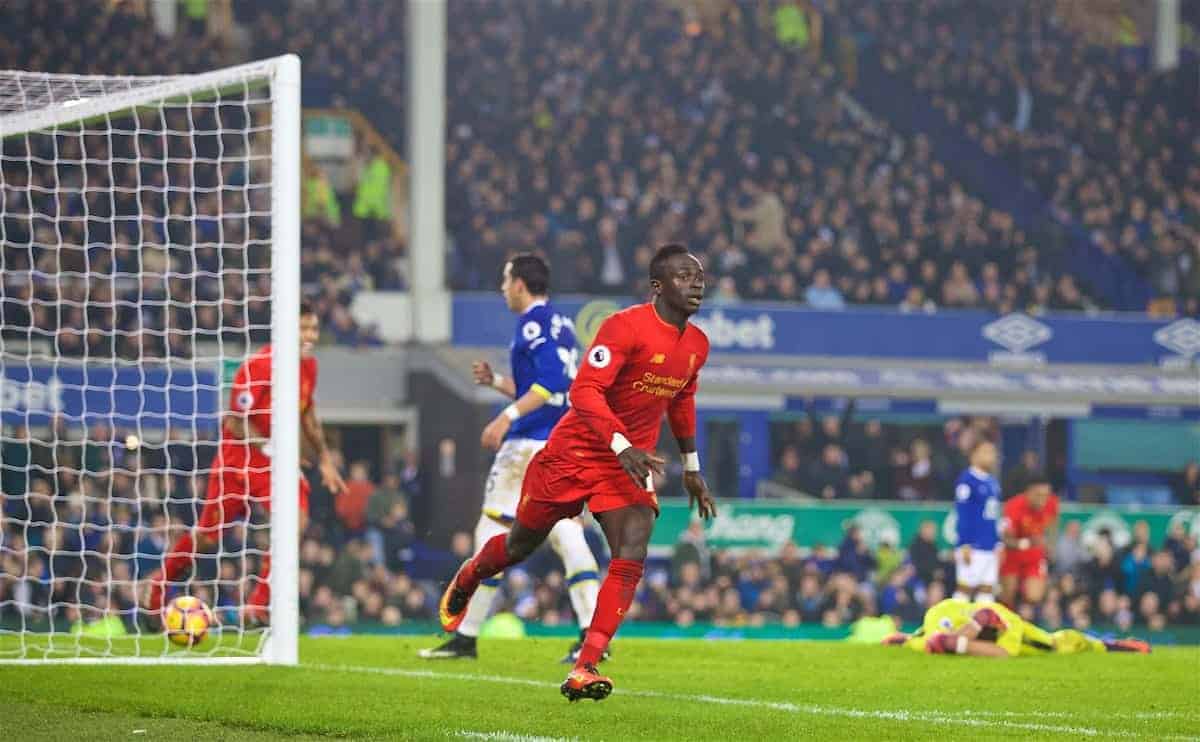 After dominating for much of the evening, Sadio Mane struck late to secure Liverpool a 1-0 win over Everton in Monday’s Merseyside derby.

Buoyed by a comfortable 3-0 win away to Middlesbrough on Wednesday night, Liverpool took to Goodison Park for the first Merseyside derby of the season, and the 227th in history.

Everton went into the weekend eighth in the Premier League table, 11 points behind the Reds, who harbour hope of sealing their first title under Jurgen Klopp this season.

Klopp, still hampered by injuries to Joel Matip and Philippe Coutinho, made no changes to the side that triumphed at the Riverside Stadium in midweek, but was boosted by the return of Emre Can and Daniel Sturridge to his bench.

Taking on an Everton side lifted by a 2-1 victory over Arsenal last time out, Liverpool’s trip across Stanley Park promised for a fiercely contested tie, and this was certainly the case. In a raucous Goodison atmosphere, both sides looked to go long in the opening stages, with the Everton defence dealing well with Dejan Lovren‘s raking balls up to the likes of Roberto Firmino and Divock Origi.

Both Lovren and Ragnar Klavan were kept busy by the Toffees’ bustling forward charge, with Romelu Lukaku particularly threatening in the final third.

Liverpool had their first shot of the evening on 27 minutes, with the ball falling into the path of Georginio Wijnaldum on the charge, but the Dutchman blasted over from 20 yards out.

The Reds began to gain control on the contest after the half-hour mark, and Origi had a great chance to put the away side ahead as Wijnaldum teed up Nathaniel Clyne to drill a cross into the six-yard box, but the Belgian couldn’t hook his first-time effort on target.

Origi’s adversary from April’s derby, Ramiro Funes Mori, saw a great chance to open the score late into the first half, but headed wide, before Mike Dean blew for the interval. Liverpool began the second half with a much-improved outlook, and a scramble in the penalty area came after an excellent, instinctive pass from James Milner, with Firmino, Clyne and Sadio Mane all coming close.

After one enforced substitution at the break, with Gareth Barry replacing James McCarthy, Everton manager Ronald Koeman was then given no choice but to change his goalkeeper, with Joel Robles replacing the injured Maarten Stekelenburg just after the hour.

The clash sparked into furious scenes as Ross Barkley slid into Henderson’s trailing leg with his studs up, with the Everton midfielder only booked, along with Seamus Coleman.

Liverpool continued to push for the opener, with Firmino firing high and wide with an ambitious bicycle kick as the pressure mounted in the box, before Robles made a sensational save to deny the Brazilian soon after.

Klopp remained patient with his substitutes, but the German ultimately sent both Can and Sturridge on, with eight minutes left to play.

It was the striker who crafted Liverpool’s winner, with his late effort rebounding off the post, allowing Mane to charge in and seal the three points.