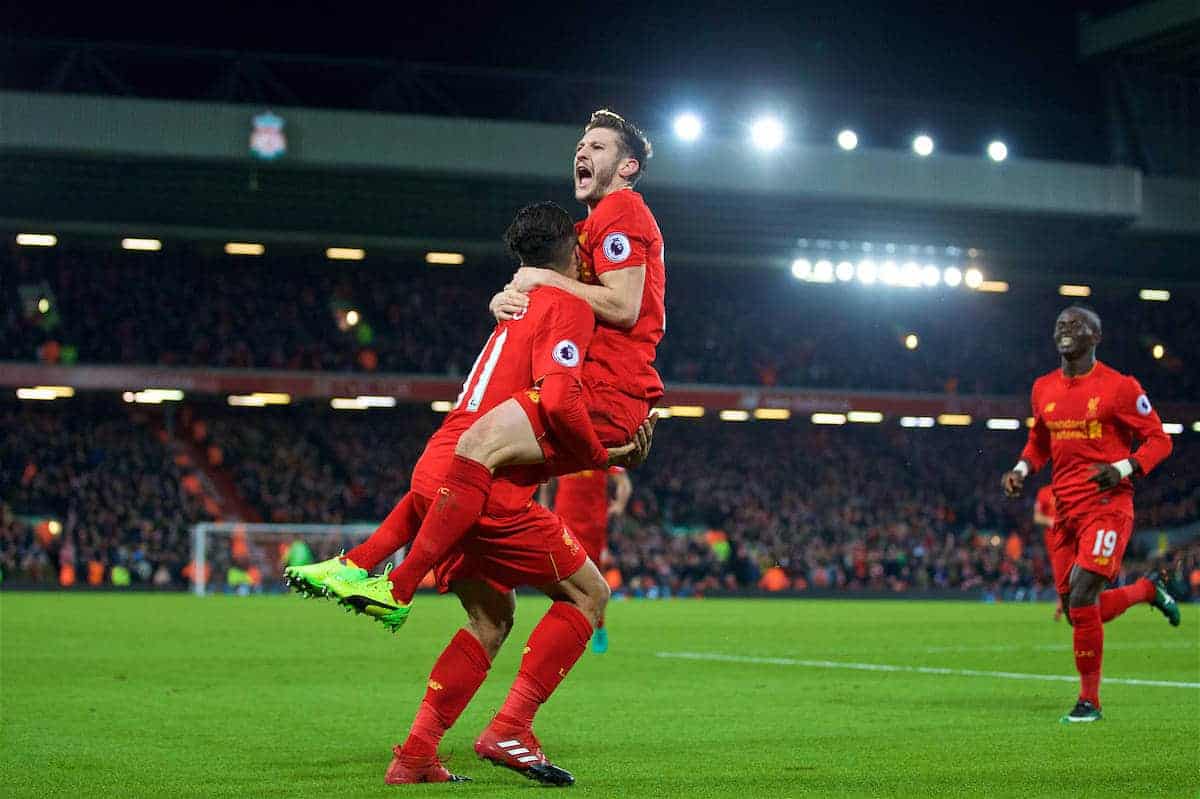 Liverpool take on Manchester City in an enormous Premier League clash on New Year’s Eve—the biggest game that Anfield has hosted this season.

The Reds’ victory over Stoke City on Tuesday was crucial, with Jurgen Klopp‘s men overturning a 1-0 deficit to eventually win 4-1. The fact that they weren’t even at their best shows what they are capable of.

City, meanwhile, triumphed 3-0 at Hull City, thanks to Yaya Toure’s penalty, a Kelechi Iheanacho strike and a late own goal by Curtis Davies.

In terms of the most eagerly anticipated matches of 2016/17 to date, Saturday’s showdown is arguably at the top of the list.

Klopp and Pep Guardiola go head-to-head in a battle between two of the world’s best managers, and their respective teams could produce an epic encounter.

There is just one point separating Liverpool and City in the league, and dropped points for either will be damaging to their title chances.

Chelsea are likely to be nine points clear once the Anfield clash gets underway, taking on Stoke in a 3pm kickoff—a sizeable lead at the top which cannot afford to grow much bigger.

While the majority of teams have simply parked the bus away to Liverpool this season, Guardiola is sure to stay true to his philosophy and go on the offensive.

That promises to make for a very attack-heavy 90 minutes, and it is impossible to imagine the game ending in a drab goalless draw.

Liverpool should fancy their chances against any team they come against at home, but in City, they face one of the most formidable sides in the league.

That said, the visitors have looked shaky defensively, so the Reds’ attacking players will fancy their chances of wreaking havoc.

Prepare for a potentially breathless night of football on Merseyside, as 2016 comes to a close.

We spoke to City fan and football writer Stephen Tudor (@TheDaisyCutter1) to discuss his team’s season so far and how Saturday’s clash is likely to play out.

How would you rate City’s season so far out of 10? You came flying out of the traps, but it hasn’t all been plain sailing, has it?

To say it has been mixed is an understatement.

There have been glimpses of what hopefully lies ahead, such as the performance at Old Trafford early in the season where Pep’s nascent masterplan offered up the best football I’ve ever witnessed from any City side in over 30 years of watching them.

There has, however, also been the shambolic disunity at Leicester—a display so catastrophically abysmal it brought genuine embarrassment.

It is certainly fair to say that anyone other than Guardiola at the helm would have prompted concern and criticism at this point. So six out of 10 seems about right—the best is yet to come and lies just over the horizon.

What are your thoughts on Guardiola’s start to life in Manchester? How has he adjusted to the Premier League?

Those cliches being that Pep was guilty of making far too many changes per game with his personnel and tinkering constantly with the system. Consequently, the players were clearly struggling to keep up. To them it must have felt like entering university and having all four years of coursework being thrown at them in the first week—”okay here’s advanced physics, you’ve got three days to read that, no scrap that for now, we’re moving onto to quantum mechanics for this game.”

And when you’re talking about players such as Aleksandar Kolarov—who in football terms barely scrapes an A-level pass—it’s led to some pretty bizarre and indefensible defending.

Pep’s approach was total immersion, and considering that his players needed time to absorb a very complicated and exacting philosophy at the same time Pep himself was adapting to a new league, it perhaps should have been done piecemeal.

Hopefully those initial dramas are now easing, though.

Turning your attention to Liverpool, how do you assess them under Jurgen Klopp? Genuine title challengers now?

Absolutely they are title contenders and I only see them getting stronger as the season progresses and the belief grows.

Klopp has already done what all the great managers do—forges a team containing exceptional individual components that work even better as a unit and does so in an exacting manner that he demands.

Brian Clough did that and it annoys me considerably that it is Jose Mourinho who wrongly gets compared to Ol’ Big Head.

It’s a very tough one to predict, but how do you think Friday’s game will pan out tactically? And what do you think the final score will be?

Both sides like to move through the gears rather than come haring from the blocks, so I’m anticipating a cancelling out in the first half before spaces are found in a hectic second period.

Suspect defences on both sides will be targeted and spaces behind full-backs prioritised. My prediction is a single goal (probably to Liverpool) in the opening 45, followed by three in a rollercoaster second half. 3-1 to Liverpool.

Philippe Coutinho will not be fit enough to feature at Anfield or against Sunderland on January 2, with the Brazilian still not fully recovered from the ankle injury picked up against the Black Cats last month.

Joel Matip also won’t be back in time for City, although the performances of Dejan Lovren and Ragnar Klavan in his absence have been encouraging.

Daniel Sturridge is pushing for a start, following impressive cameos against Everton and Stoke, but it would be a shock if he replaced Divock Origi.

Meanwhile, Emre Can is likely to remain on the substitutes’ bench as well. The return of Sergio Aguero from a four-game ban is a huge boost to City, with the Argentinian arguably the Premier League‘s best player on his day.

Liverpool will have to hope the 28-year-old is a little rusty, having not taken to the field since his shocking challenge on Chelsea‘s David Luiz at the start of the month.

The injury-prone duo of Vincent Kompany and Ilkay Gundogan are both out of Saturday’s game with respective knee problems, while Fabian Delph is also still missing. John Stones is expected to be fit. The Liverpool manager was excited about the prospect of facing City, and looked to gain home advantage:

“It’s very big for both teams.

“It is the most important game I can imagine, against an outstanding, strong side. The biggest advantage for us is that it’s at Anfield. We should try to use this advantage.

“It will be really difficult for both teams, but I’m really looking forward to it.

“We love playing against the best, and they are in the group of the best teams in the world.”

One to Watch: Yaya Toure Toure’s return to the Man City side looked improbable at one point, but he has been in impressive form in recent weeks.

The Ivorian has been such a talisman for City over the years, and it is in the big matches when he has often delivered.

Liverpool will have to keep Toure quiet on New Year’s Eve, with his power in the middle of the park and shooting from distance both potent weapons.

On the flip side, however, the Reds’ all-action style could make the 33-year-old a weak link off the ball—this is something Klopp should look to exploit, assuming Toure starts.

Liverpool vs. Man City rounds off the Premier League action on Saturday, with BT Sport 1 showing live coverage of the match. Kickoff is at 5:30pm (GMT).

We will also be running our matchday live blog from 4:45pm, with minute-by-minute updates from Anfield.