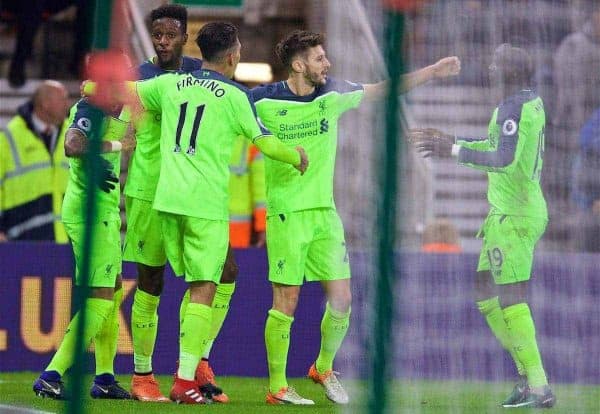 Liverpool moved up to second in the Premier League with a comfortable 3-0 win over Middlesbrough on a night of positive talking points.

A brace from Adam Lallana and a Divock Origi strike ensured the Reds made a much-needed return to winning ways at the Riverside Stadium.

After some recent patchy form, it was vital Jurgen Klopp’s side got their title charge back on track, and they did just that with an impressively accomplished team performance on Teesside.

Klopp will be delighted with his side’s efforts on what looked to be a tricky night for Liverpool—and here are five talking points from a deserved victory.

Liverpool’s blitzing, full-throttle approach has been key to their better results this season, but it was combining that with a more methodical style that did the job at the Riverside Stadium.

The Reds settled slowly and felt their way into the game in the first half, pressing only in certain areas as they held shape and kept tight out of possession before then opening up in safer areas.

This was typified in Lallana’s opener as Liverpool kept secure possession with patient play, before committing numbers and injecting tempo in attack, where Nathaniel Clyne crossed delightfully for the midfielder to head home.

After a measured first-half display, Liverpool completely upped the ante in the second period—returning to their direct, aggressive style as they sought to really turn the screw.

Two opportunities instantly arrived for Sadio Mane, before Origi eventually doubled the lead and Lallana grabbed his second as the Reds’ greater fluidity and tempo brushed Middlesbrough aside.

Away from home in a testing game at an unhappy hunting ground, Klopp measured the situation perfectly and earned the deserved rewards for his shrewd tactical approach.

When things aren’t running quite as smoothly as hoped, big players are needed to step up and make the difference.

With pressure on the Reds and a result needed, Lallana provided the exact influence required, leading the way with a dominant display.

One criticism of Lallana in his previous two seasons at Anfield was his lack of substance to complement his eye-catching style, but this slur can no longer be aimed at the midfielder.

Lallana’s end product has transformed under Klopp’s guidance, and while he’s been a key cog in a fully-functioning system in most departments this season, the individual influence he carries has been crucial numerous times—as it was again on Teesside.

Chalking up two more goals to take his tally to six this season—already one more than managed in the whole of last campaign—as well as another assist, contributing to a fantastic team goal finished by Origi, Lallana was at his best.

His energy out of possession, especially in the second half, was also crucial as he led the Reds as they upped the tempo in search to kill the game off.

An influential performance was needed on an important night for Liverpool, with key players like Philippe Coutinho missing and Roberto Firmino struggling for form. It was a joy to watch Lallana provide it.

Klopp may only have made two changes to his team, but it was a significant one that dominated pre-game buildup, as Simon Mignolet replaced Loris Karius.

Klopp seemed set to back the under-fire German again at the Riverside, but the unconvincing displays that have cost Liverpool ground in the title race prompted the boss to take Karius out of the firing line.

The long-term implications of this will be analysed heavily in coming days, but on the night, the decision, which Klopp described as “easy,” also proved the right one.

Under intense scrutiny—given the circumstances in which his first start since Liverpool’s win at Chelsea in September arrived—Mignolet was excellent, producing a clean sheet and the sort of display we’ve all been crying out for.

The Belgian made one fantastic stop at his near post to deny Viktor Fischer’s vicious strike in the first half, and also he displayed good handling with more routine efforts.

He was alert throughout in sweeping up behind his defence, and his distribution was impressively efficient, while his command of area and confidence in claiming crosses was great to see.

Switching ‘keepers was good management by Klopp: he rightly protected Karius, thinking of long-term impact, and also handed Mignolet the chance to make his mark in attempt to earn his place back.

It was an opportunity the Belgian took with both hands, which hands Klopp a further dilemma to solve.

Stepping up to fill the void created by Coutinho’s injury, there was a big onus on No. 27 to deliver—and boy how he has.

Though not offering the same influence to the team collectively as the Brazilian, Origi’s goalscoring form has gone some way to compensating for that loss—and has been the biggest positive of Liverpool’s mini blip.

Scoring his fifth goal in as many games and also picking up an assist for Lallana’s second, the 21-year-old has gone some way to dragging the Reds out this lull himself, while also rediscovering the form that saw him come to the fore last season.

His power, directness and the ability to hold the ball up and take players on in one-on-one situations makes him such a tricky customer for defenders, and a real vital feature for Liverpool as they adapt to key absences.

Goals have come from all over the pitch for Klopp’s side this season, but at a time when a portion of those are missing, it’s magnificent to have a reliable source of goals the way Origi has provided.

Being forced off late on with injury puts a slight dampener on another positive outing from the Belgian, and everyone associated with Liverpool will desperately hope it proves nothing serious.

Reds Back On Track Ahead of Merseyside Derby

Having started a run of three games in nine days against West Ham without the winning form wanted, it was essential victory was earned by any means necessary at the Riverside.

Not only in order to get the title charge back on track, but to also begin rebuilding momentum as a tough Christmas period looms.

Liverpool kick this testing run off with the Goodison Park instalment of the Merseyside Derby that could ruin Christmas in half of the city’s households on Monday night.

After a patchy period of form, the Reds now arrive buoyed by a crucially timed and confidence-boosting result—much like the Blues following their spirited win over Arsenal on Tuesday.

Klopp’s side will now feel more optimistic ahead of a tense grudge match having earned an impressively dominant success without certain key players, and with increased belief after recent iffy form.