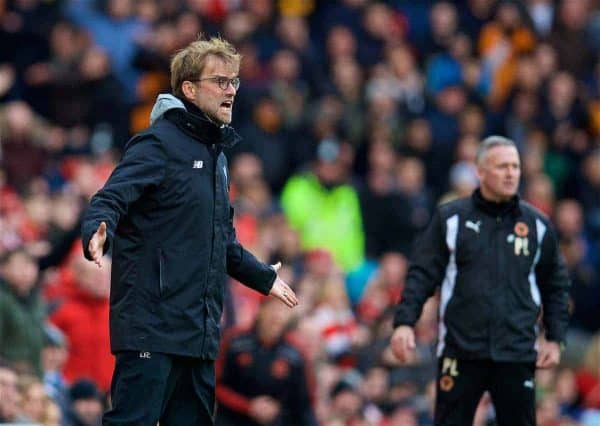 Liverpool exited their second cup competition in four days following a 2-1 loss to Wolves in front of a frustrated Anfield crowd.

Liverpool lost just two games at Anfield during the whole of 2016, they’ve already lost three in 2017.

Both of these defeats came in January of that year in the shape of a 1-0 loss against Manchester United in the league, and a League Cup second-leg defeat against Stoke – though the tie itself was won after a penalty shootout.

Jurgen Klopp‘s side wouldn’t lose at Anfield again until the recent 3-2 loss to Swansea in the Premier League, but this defeat to Wolves means they’ve lost three home games in a row, and are yet to win at home this year.

It’s a worrying decline for the Reds who don’t look like half the team they did at the start of the season, and turning this mess around so that the side finish comfortably in the top four will be Klopp’s biggest challenge at the club to date.

Liverpool’s catalogue of errors is growing, and the nature of these mistakes have a familiar feel.

A goal conceded often begins with a deep lying midfielder being bypassed — in this case Lucas, but often Jordan Henderson — leaving the defence exposed to the counter-attack.

Then there’s the obligatory foul in a dangerous area. Whoever plays left back has to do at least one of these per game, while Lucas won’t be happy with his day’s work unless he’s done a foul in his own half which deserved a booking.

Set pieces are a great opportunity for a defensive error, and Liverpool wasted no time ticking this box as they conceded within the first minute.

Helder Costa’s free kick was met at the far post by Richard Stearman, as Divock Origi added his name to the LFC catalogue of errors — available on all good stats websites.

The referees can play their part, too. Free kicks taken meters away from where the foul was conceded and marginal offside calls against Klopp’s team all contribute to the tale of a goal against Liverpool.

Some team changes were expected for this FA Cup tie in amongst a busy fixture schedule, but this one certainly wasn’t.

Klopp went with the predicted mix of youth and experience as he had done in the previous FA Cup game against Plymouth, and Trent Alexander-Arnold seemed nailed on to keep his place at right back in Nathaniel Clyne‘s absence.

Bit in a twist the the tale, Randall, the heir to Jon Flanagan, made a surprise start in the right full-back slot and endured a torrid afternoon.

Liverpool had conceded a goal from the first free kick they’d given away, but Randall than conceded another in an even more dangerous area shortly after. They were lucky not to be punished for a second time as the ball fell at the feet of Nouha Dicko who wasn’t expecting the ball.

One of his first passes could only find the lower rows of the centenary stand as he found it difficult to settle back into the pace of first team football.

If this was an attempt to put the 21-year-old in the shop window, then it failed. He was taken off at half time and replaced by Philippe Coutinho.

The League Cup semi-final against Southampton highlighted Liverpool’s problems when it comes to breaking down a deep lying, well organised defensive side.

Wolves manager Paul Lambert will have seen that game, as well as the game at Anfield against Plymouth in the last round of this competition, and made similar plans for his own team.

The plan is simple: eight players forming two banks of four, a ninth player whose job it is to buzz around where he’s needed while having one eye on the counter attack, and a lone striker ready to hold the ball up or burst forward on the counter himself.

Klopp’s side just can’t seem to break this system down. Even a change in formation to three at the back and a 3-1-4-2 shape couldn’t make any inroads, as the players were limited to shots from distance or floated crosses to no one.

The goal eventually came from a corner, and as the game reached the final stages set pieces were avenue which looked most likely to lead to goals, but the side were unable to level the scores despite a late flurry.

The Chelsea game is massive

Out of two cups in the space of four days, and without a league win in three, things are looking bleak for the Reds.

This could all change should they beat Chelsea at Anfield on Tuesday, and if they do so they’d be within seven points of Antonio Conte’s side with 15 games left to play.

If Klopp’s men could put together a run of wins similar to those at the start of the season, then they could be in with a chance of challenging at the top of the table.

Lose, and it well feel like a struggle to remain in the top four rather than a title challenge.

A season with no trophies and no Champions League qualification at the end of it would be a big disappointment following the blistering start they made to the campaign, which is why the Chelsea game is such an important one to win.