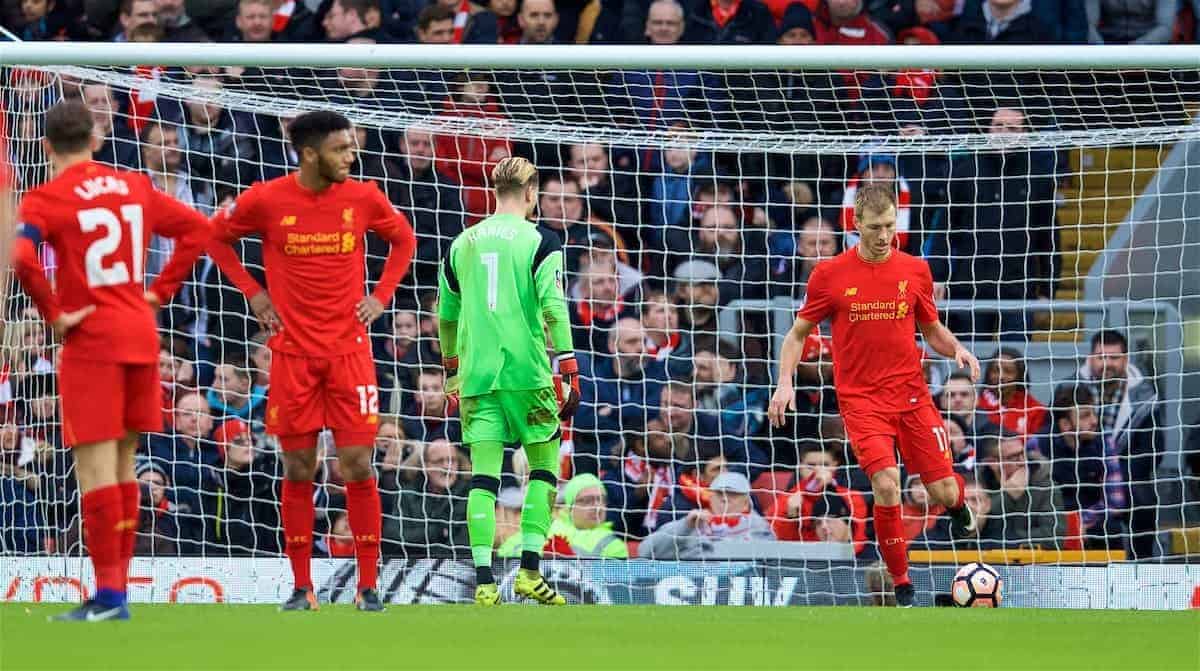 Liverpool went crashing out of the FA Cup following a hugely disappointing 2-1 defeat against Wolverhampton Wanderers in the fourth round on Saturday.

There were a few surprise additions in the squad as Connor Randall and Harry Wilson were given the nod ahead of Sheyi Ojo and Trent Alexander-Arnold.

However, the new-look back four were exploited within a minute of the game getting underway when Richard Stearman netted Wolves‘ opener, leaving Anfield stunned.

Things went from bad to worse when Andreas Weimann doubled Wolves‘ lead shortly before the half-time break after an awful opening 45 minutes from the Reds.

Divock Origi scored a consolation goal for Liverpool in the 86th minute but it was too late and it was a game to forget as the Reds went crashing out of the second cup competition in three days.

Here’s how supporters reacted to Liverpool’s 2-1 defeat at home to Wolves in Saturday afternoon’s FA Cup fourth round clash.

“I’m speechless watching this … Conceived in a minute!” – Peijal Mohd Noor on Facebook.

You may have gotten up early to watch this, but #LFC are still rolling out of bed. Too passive without the ball and too easily dispossessed

“There’s only one solution to get us back on track, we must locate Bobbys pony tail and reattach it” – Topper_92 on the forums.

Connor Randall’s performance did not impress supporters either…

Genuinely don't think Randall would play for a League Two side

What in the world is Randall doing? Did he win a raffle for a Liverpool contract? pic.twitter.com/XlTAPK1q3o

And fans were missing Sadio Mane once again…

Mané or a new winger isn't going to solve our problems. Woodburn has been our best fullback today, we've got serious defensive issues. #LFC

Have a slight feeling when Mane went to the AFCON the full #LFC squad went as well ?

It's beyond laughable now Jürgen.

Hadn't lost a league game at home in a year , now we lose 3 in a week but never mind Klopp says we don't have a bad defence.

“It’s almost like the players wants to show Klopp that they’re in desperate need of new fresh players. This is comedy” – PJ POP on the forums.

Think of how many terrible players have won at Anfield recently. Wow.

That's classic Liverpool. Score just to get our hope up then proceed to rip our hearts out

” I like the theory…..let’s get knocked out of all the cups, that way we won’t have any fixture congestion so we won’t have to buy any reinforcements! Flawless idea ??” – Clive Pullen on Facebook.

Out of the EFL, out of the FA Cup, out of the title race all in one week, by 3 defeats to minnows at home. That takes some doing.

FSG need to shell out the cash & buy quality players – this is ridiculous!

“One of the worst months of watching Liverpool that I can remember. Certainly since the days of Hodgson and the last days of Rodgers.” – Alex Williams on Facebook.

Sakho, Sturridge, Moreno, Lucas and Can are all players we could cash in on and get some new blood in. Can't believe we've signed no-one.

A week ago we had 4 home games coming up that would cement what a great season it's been. Now it's looking like a total disaster! #LFC