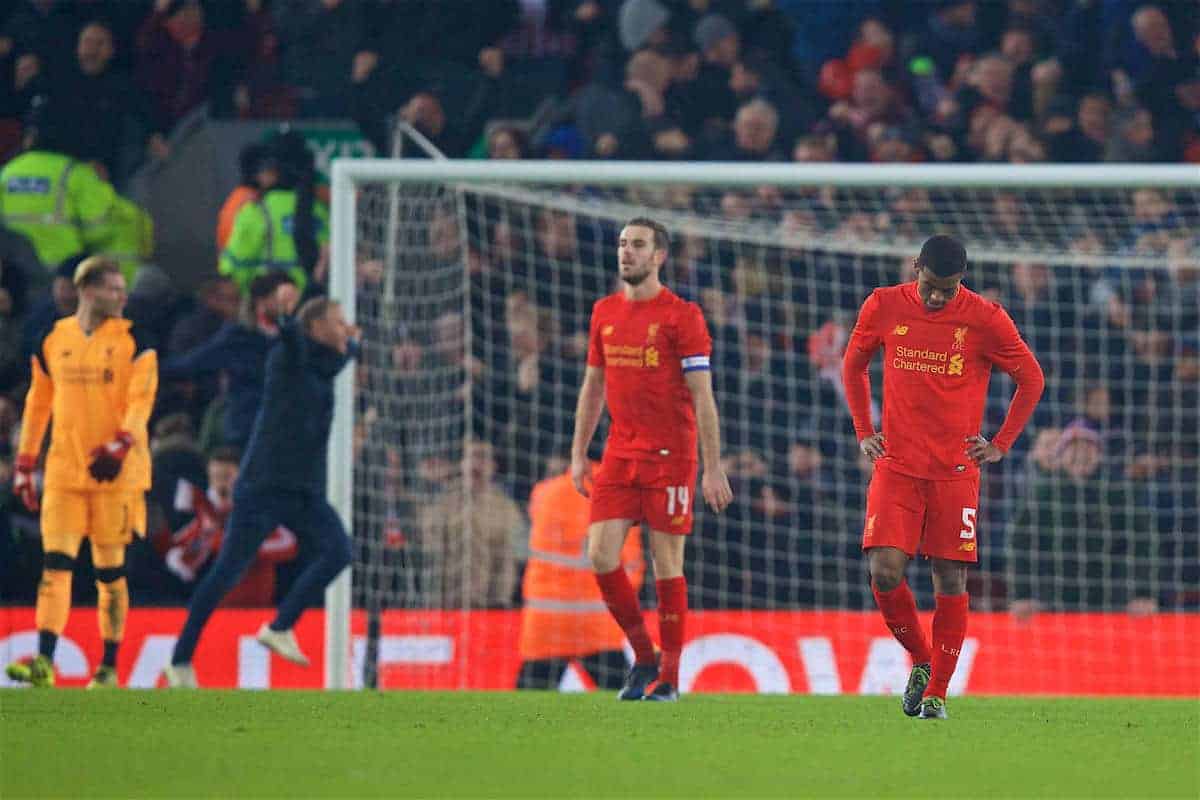 A late strike from Shane Long consigned Liverpool to a 2-0 aggregate defeat to Southampton in the League Cup semi-finals on Wednesday night.

Having already suffered a 1-0 loss at St. Mary’s in the first leg of their semi-final, Liverpool needed to produce a strong performance on home turf in order to reach their third final in a year.

But while Emre Can, Daniel Sturridge and Philippe Coutinho all came close, and Divock Origi had a late penalty call waved away, it wasn’t to be for Jurgen Klopp‘s side.

With Southampton regularly threatening on the break, it took a decisive effort from Long to seal the result for the away side in the closing stages, with Claude Puel set to lead the Saints to Wembley.

For the Reds, this serves as yet another disappointment in a turgid 2017, with Klopp now having overseen just one win in seven games since the turn of the year, and that being away to League Two outfit Plymouth Argyle.

Some were surprised by the inclusion of Can…

Am I ready for another 90, possibly 120 minutes of Emre Can? pic.twitter.com/DWjekl81GE

“Can must be teacher’s pet…He doesn’t deserve to start after his last couple of performances.”
– Raymond Dann on Facebook.

“Need a big game from them, especially Can. Can’t understand him breaking the midfield trio that started the season so well.”
– robbiemcc62 in the comments section.

Big game for Sturridge and Emre Can. Hope they both have really good performances. Especially Sturridge. Needs it.

James Milner got his shoes on the wrong feet tonight.

“Milner’s touch has been poor for awhile, and I hate to say anything slightly bad about him with the professionalism he’s shown.”
– StrongINTheAir on the forums.

12 minutes in & Milner's already given possession away 4 times unnecessarily. Seems slow/hesitant to react.

TAA is doing well offensively & in possession but defensively struggling vs the movement & pace he's facing. Getting caught out repeatedly

A good 10 minutes from Nathan Redmond. Joel Matip not so comfortable now

Can went close as Forster spilled his strike onto the line…

How's he got away with that!! Great recovery save from Forster to somehow keep it out!

“Not our night.”
– Dark Metal on the forums.

I mean, I sound like an old man, but back in my day… pic.twitter.com/A1qAGHaUdB

It's a goal in my opinion ?!! @LFC 0 VS Southampton 0 pic.twitter.com/PwPND4QetD

Before Sturridge scooped the ball over from point-blank range…

“Much better, but no more profligacy, please. Sturridge had plenty of time on that chance…”
– NorseDweller in the comments section.

It's been too much of a dry January for #LFC.

What a difference a month makes… #LFC

Saints more than merit that over two legs. Really bad moment for LFC and things have to change quickly. Top 6 will cut weakest in league.

“We seem to be in a collective fug of tippy tappy, nicey nicey football.
Yes we miss Mane, but the players that we have available, should be able to cope.”
– BhupendraS on the forums.

Liverpool only played well for one of the four halves in the tie. A potentially amazing season is under threat of unraveling completely…

In truth there are deeper problems than this defeat for #LFC. Performances been going backwards since mid-Dec. Now results catching up.

Liverpool definitely in a slump now. Bad results and performances over 5 or 6 games. Not the end of the world, either.

The 4-3-3 we blew teams away with in Sep / Oct has been worked out. We either need better players to make it work or a new approach

Without Sadio Mane, it has become a little Rodgers-esque. We are easy to defend and counter against. Rethink required. #Klopp #lfc

Very disappointing night for LFC. Didn't take moments had. Credit to Southampton for the way they performed over 2legs to progress to final