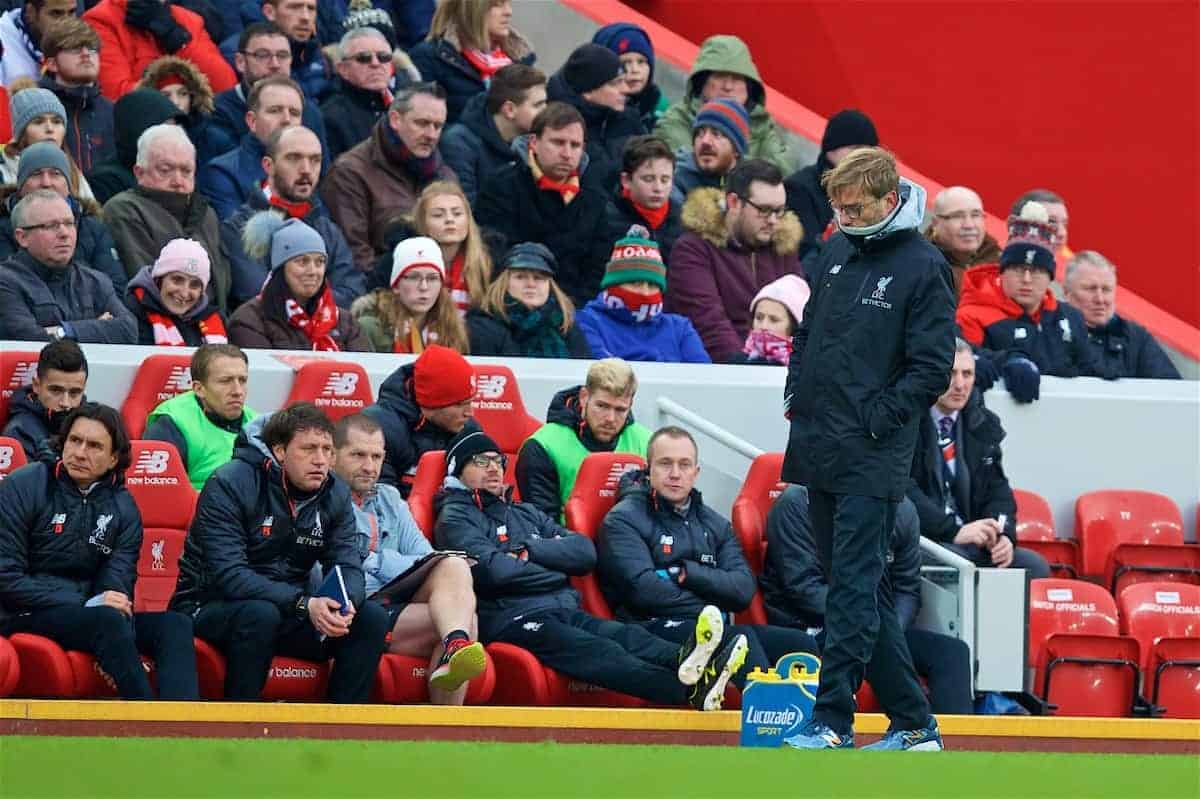 Jurgen Klopp has lamented the dour defensive display of his Liverpool side as they fell to a 3-2 defeat to Swansea City on Saturday afternoon.

Two goals from Fernando Llorente and another from Gylfi Sigurdsson consigned the Reds to defeat at Anfield for the first time in a year, with Klopp’s side dropping points at a crucial stage.

Kicking off a must-win run of four games in 10 days with a loss to the Premier League‘s bottom side is a bitter blow, and Klopp was not happy with the way his side defended on Saturday.

Speaking to reporters after the game, the German was particularly critical of the defending for the third goal.

“The crowd was finally there, and the atmosphere was for winning Liverpool.

“In this moment, we had enough players around the challenges but nearly nobody in the challenges. That makes no sense. I saw no challenge, actually.

“We were two or three times too passive and, in the end, a free player in our box, that’s a big mistake.

“[It’s] not of one player, for sure not, [there were] a lot of players involved in this situation. But that this is possible against us, that’s really disappointing.”

He also was critical of the first goal, conceded from a corner, saying he “couldn’t see how Llorente could be completely alone in the six-yard box and score the goal,” though he attributed no blame to his back line for the Spaniard’s second, simply saying “brilliant cross, brilliant header.”

Most troubling for Klopp, however, was the manner of Sigurdsson’s winner, with the Iceland international benefiting from a sloppy clearance from Ragnar Klavan after a long ball forward.

“The most disappointing moment, the third goal, nearly everything was wrong around this goal,” he continued.

“I think it started with a long ball—that was not a real surprise, they played a few of these.

“The reaction on the long ball was not good. We strode back, we were there and we scored, then we obviously couldn’t switch in this moment to a defensive mood.

“That was the biggest mistake in this situation. We were passive.”

Liverpool’s passivity was a major factor in their defeat, and while Roberto Firmino spearheaded a spirited revival, it prove too little, too late, as Klopp’s side undermined their title charge.

Next taking on Southampton in the second leg of their League Cup semi-final on Wednesday night, Klopp will be expecting much more from his defence—with Joel Matip no doubt returning.