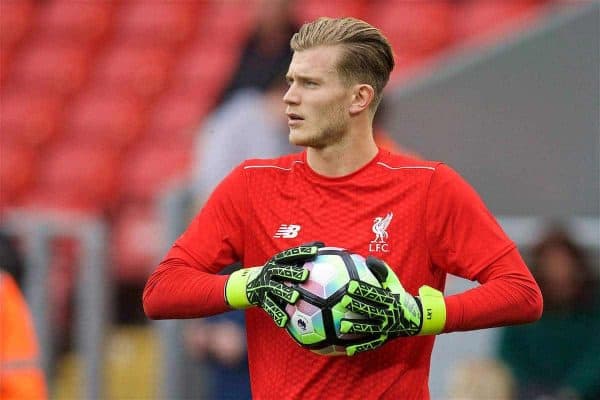 Loris Karius is set to keep his place in goal for Liverpool’s League Cup semi-final first leg away to Southampton, Jurgen Klopp has suggested.

Karius had a quiet afternoon between the sticks in Sunday’s 0-0 draw with Plymouth Argyle in the FA Cup third round, in his first game since dropping down to the substitutes’ bench.

The German kept a clean sheet, but had little to do as Liverpool peppered his opposite number, Luke McCormick, with shots throughout.

This gave Karius little opportunity to impress, having been usurped by Simon Mignolet as Klopp’s first-choice goalkeeper in December, but the trip to St. Mary’s provides another.

Speaking to reporters at Melwood on Monday afternoon, Klopp confirmed it was “pretty likely” Karius would start against the Saints.

“No final decision, but it’s pretty likely that Loris plays again,” he explained.

This will be a boost to the 23-year-old, who produced a number of lacklustre performances in goal towards the end of 2016.

Karius came under considerable criticism after some high-profile errors, and became embroiled in a public dispute with Sky Sports pundit Gary Neville. Time out of the spotlight has seemingly benefited Karius, and Klopp clearly feels he is able to rely upon his summer signing in what is an important League Cup clash.

The Reds already played Southampton at St. Mary’s this season, and were held to a 0-0 draw, but this is unlikely to be the same with all to play for.

Klopp made 10 changes for Sunday’s draw with Argyle, but while some sections of the support were critical of his approach, he remained emphatic in his backing of a youthful selection.

“I don’t expect fairness in judgement. It was clear before the game, if you win it’s wonderful you have the youngest lineup ever,” he continued.

“That was the lineup we should have chosen. I could explain each single change, I don’t want to but I could.

“I asked in the changing room this morning: ‘could we have done better?’ [They said] ‘100 percent yes’.

“I don’t expect perfection, but I have the highest expectations because of training.”

The 49-year-old did confirm that he is likely to make more changes against Southampton, however, with the likes of James Milner and Philippe Coutinho back in contention after injury.

A more experienced lineup can be expected, giving Karius the perfect chance to prove his worth once again.