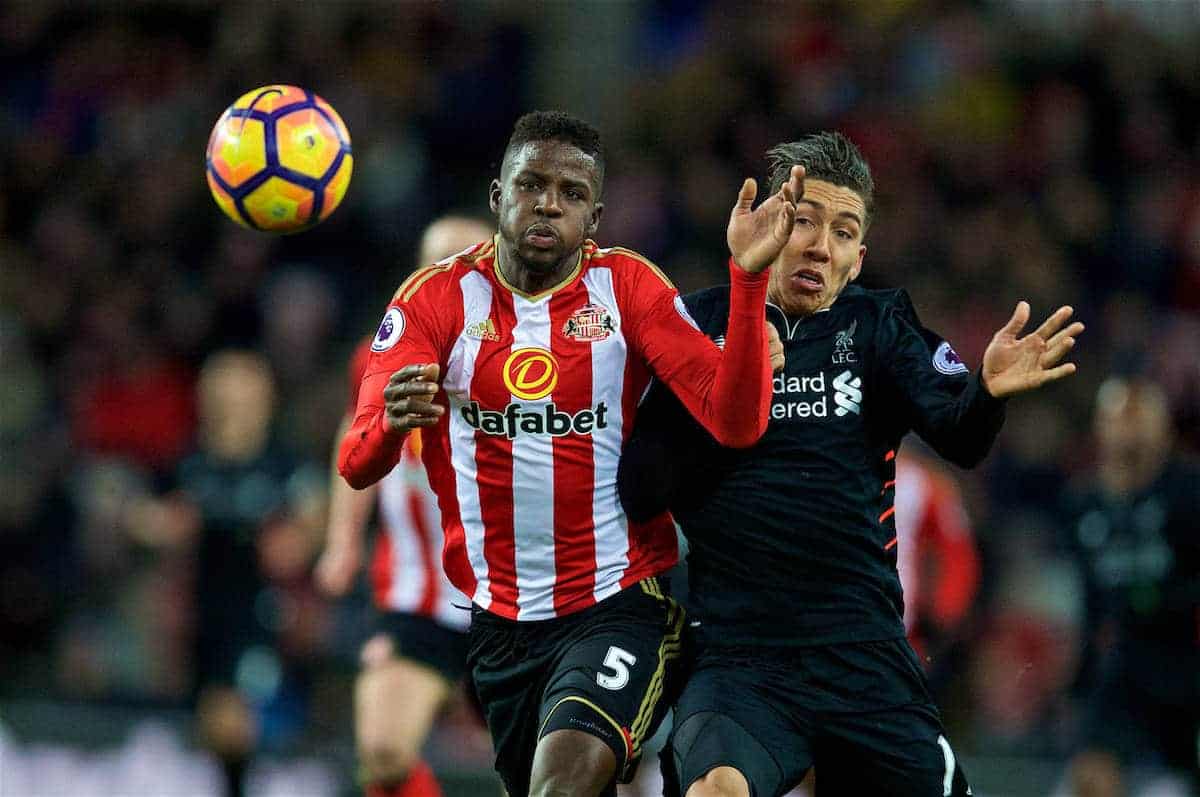 Liverpool’s trip to Sunderland on Monday proved to be a deflating one, as they could only muster a 2-2 draw on Wearside as Jurgen Klopp opted not to make changes.

Liverpool began the new year in disappointing fashion as they were held to a 2-2 draw by David Moyes’ relegation threatened side who had been hammered at Burnley 48 hours earlier.

Though Daniel Sturridge opened the scoring in the opening 45, Jermain Defoe equalised from the penalty spot shortly afterwards, and it was the same story after the break as Sadio Mane put the Reds back in front but then handled in the area to gift the Black Cats a point.

Coming less than 48 hours after a euphoric 1-0 victory at home to Manchester City, this is a major setback for Liverpool in their push for the Premier League title. After the win at home to City on New Year’s Eve, Klopp suggested he would look to utilise his squad ranks and rotate for the trip to Sunderland—but this didn’t prove to be the case.

The German made just one change, replacing the injured Jordan Henderson with Sturridge, meaning 10 of his players had started two games in 48 hours.

While the fact that both managers were forced to name two teenagers on their substitutes’ bench highlighted the gruelling nature of the festive schedule, Klopp still had Lucas Leiva, Kevin Stewart, Alberto Moreno and Divock Origi in reserve.

“We decided for rhythm, that’s the reason for the lineup.”

That rhythm, however, proved to be a myth, with Liverpool lacking the bite and intensity that fuelled the victory over City at Anfield; change was needed, and Klopp made a costly mistake.

Subs were also pretty slow to materialise despite the tired legs on the pitch. Sturridge’s inclusion was a positive one, with the striker in impressive form since returning from a calf injury, setting up the winner away to Everton and scoring in the 4-1 win at home to Stoke City.

Making his first Premier League start since October’s 0-0 draw with Man United, the No. 15 marked the four-year anniversary of his arrival at the club with another bright showing.

He opened the scoring on the 20-minute mark, and was Liverpool’s most dangerous player in the final third, firing six shots on target and winning the corner that led to Mane’s goal.

But limping off the field with 10 minutes left to play, Sturridge presented another concern as the Reds begin 2017.

Whenever Sturridge looks to gain momentum, it is swiftly curtailed, and if he is sidelined yet again, Klopp’s options in attack will be sparse.

Liverpool Will Miss Henderson in January

Before the game, Klopp provided a welcome update on Henderson’s heel injury, after the captain was forced off midway through the second half on New Year’s Eve.

“We’ll miss Jordan, but hopefully it’s not that serious. He’s in a lot of pain in the moment, but maybe in 10 days he can be back,” he said. “Today we still have a really good lineup, especially with Emre.”

That Klopp highlighted Henderson’s replacement, Emre Can, as a key positive in the buildup proved to be something of a fallacy, as the German produced a shaky display in midfield.

Henderson’s form has been understated but consistent this season, keeping possession ticking over with neat passes and injecting energy in the press, and this was the first time Klopp has been left to plan without him in the Premier League this season.

Can was unable to provide the same quality, and with Henderson out for at least 10 days—Klopp being notoriously optimistic regarding injuries—Liverpool were certainly miss their leader. After 20 games this season, Mane remains Liverpool’s top goalscorer (nine) and assist-maker (seven), and his importance was hammered home on Monday afternoon.

Though his late handball proved costly, Mane was one of the Reds’ most effective players throughout, with his pace, persistence and eye for a pass asking questions of the Sunderland defence.

That this was Mane’s last game before leaving for the Africa Cup of Nations, therefore, is a big blow for Klopp, with the 24-year-old potentially out for the next eight games.

If Sturridge is also unavailable in January, and Philippe Coutinho takes time to get back to full fitness, Klopp will only have Origi and Roberto Firmino as senior attacking options.

With Georginio Wijnaldum welcoming links between Liverpool and six-goal, seven-assist Spartak Moscow winger Quincy Promes, it could be that Klopp needs to dip into the January transfer market to cover for Mane’s absence.

Defeating City at Anfield would only have truly made a difference if Liverpool followed it up with another three points away to Sunderland; and as a result Pep Guardiola’s side are now firmly back in the race.

City beat Burnley 2-1 on Monday afternoon, and are now back within two points of the Reds, whose New Year’s Eve endeavour has now been undermined.

League leaders Chelsea now have the opportunity to move a staggering eight points clear on Wednesday night, when they take on Tottenham Hotspur at White Hart Lane.

Spurs are in great form, and thrashed Watford 4-1 on New Year’s Day, but Klopp and his side needing a result from the high-flying Blues is a far from favourable position.

Drawing with Sunderland can only be considered two points dropped, and Liverpool now must wait until 10pm on Wednesday before the ramifications are made totally clear.