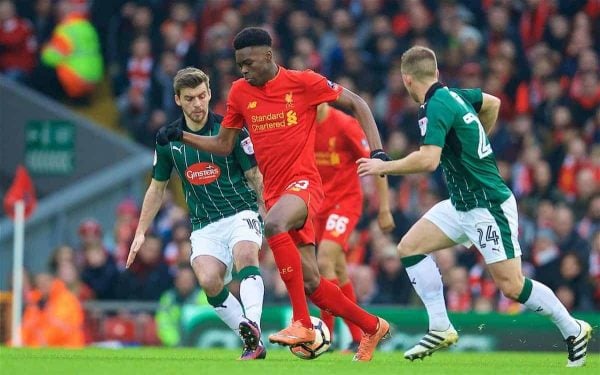 Liverpool’s young Reds will get another chance in the FA Cup after Plymouth Argyle’s stout defence forced a replay at Anfield.

Anfield was in an optimistic mood as fans were treated to a glimpse of the club’s future, with Jurgen Klopp naming the Reds’ youngest ever XI.

Having barely rotated his squad over the festive period Klopp went from one extreme to the other, changing almost every player for the visit of The Pilgrims from League Two.

Loris Karius returned in goal in his new role as backup to Simon Mignolet, while the experienced Lucas Leiva captained the side.

Liverpool attacked the Anfield Road end in the first half, and due to the extra allocation for away fans in FA Cup matches the stand was filled with Plymouth Argyle fans. Their dark green shirts littered the packed stand, adding an illusory strength to their team’s ten man defensive wall.

Klopp’s young guns fired at it repeatedly with Ben Woodburn and Sheyi Ojo darting and cutting inside from their wings and looking like the players most likely to make the breakthrough.

Teenager Woodburn gave a good display, showing quick feet to create space for a couple of half-chances. His best effort effort came following a pass from Can, but his toe-poked shot was saved by Plymouth goalkeeper Luke McCormick.

The best of these chances fell to Ojo who had a headed chance as the ball fell from the sky following a Can free kick, but his effort was tame and easily saved by McCormick.

The relatively experienced Divock Origi spearheaded the attack and had the ball in the net after taking a Kevin Stewart pass on his head before rifling home right footed only to have it disallowed. Referee Paul Tierney adjudged him to have fouled the defender, but there wasn’t much in it.

The away fans grew in volume as shot after shot was blocked or went harmlessly wide. Liverpool players took turns on set pieces but none could produce the elusive goal.

Joe Gomez, making his first start in 465 days, made sure that on the couple of occasions the visitors threatened, they didn’t get very far.

The second half began in a lively fashion with each side attacking the ends housing their own fans.

Karius could have sat out the first half given the non-existent threat to his goal, but he was called into action early in the second period, catching a Graham Carey free kick in a crowded box.

Woodburn and Ojo linked up again at the other end, but Ojo’s header from his team-mate’s cross was deflected wide. The corner wasn’t given.

The Reds peppered the Argyle goal with shots, but most were blocked. Even Lucas got in on the act, firing a powerful shot straight at McCormick.

As the game reached the hour mark Klopp introduced his most potent goal-getter, and within minutes of coming on Daniel Sturridge came close to opening the scoring as a left-footed mis-hit dribbled just wide of the post.

The striker almost set up Ojo shortly after, but the the 19-year-old couldn’t quite reach the through-ball after making a good run inside from his wing.

Roberto Firmino and Adam Lallana came on with around 20-minutes to go, as the game paused while Plymouth defender Gary Miller was stretchered off having picked up an injury.

Stewart put in an impressive tackle to stop a dangerous run from substitute Craig Tanner in a rare attack by Derek Adams’ men.

Both Sturridge and Firmino came close, while Jake Jervis shot wide for the visitors after intercepting a poor pass from Lucas.

Six minutes were added on, and though Liverpool almost got lucky in the last of these as the ball deflected off a Plymouth defender perilously close to his own goal, it ended up in the hands of McCormick, their busy but rarely tested goalkeeper.