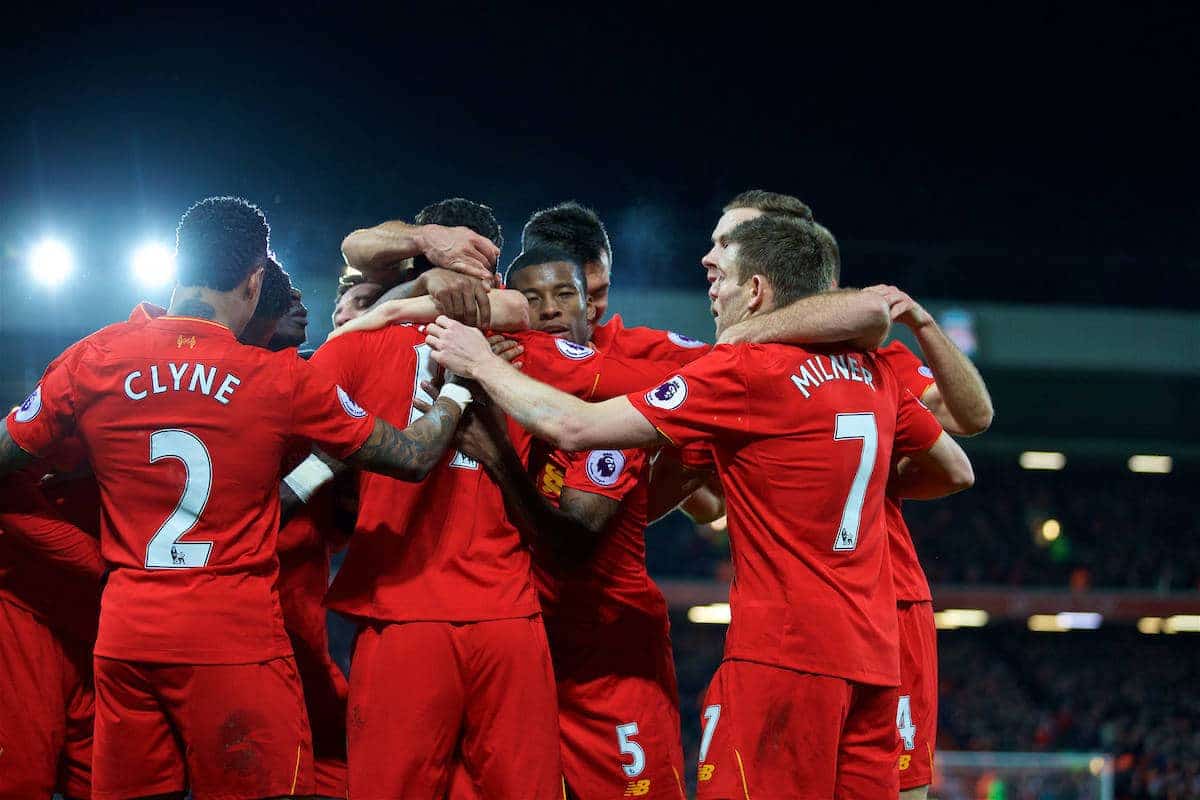 After Jurgen Klopp‘s youngsters passed their test in Plymouth, Liverpool now need their senior talent to perform as they enter a crucial stage.

With Joe Gomez, Trent Alexander-Arnold, Ovie Ejaria, Harry Wilson, Sheyi Ojo and Ben Woodburn all on the pitch as Graham Scott blew the final whistle at Home Park, Liverpool ended the game with an average age of just 21.1 years.

This serves to highlight the quality coming through the club’s academy, with Wilson the latest player to debut during Klopp’s reign, but also a lack of form in his experienced stars this month – with the more experienced squad players failing to impress.

Victory over Argyle has put Liverpool back on track in 2017, the first win of the year, but now Klopp’s side face a key period in which they must maintain their winning form.

To do so, they will need their senior squad players to perform, in what could be a pivotal month.

Gems of the Academy Just as with last season, when the likes of Brad Smith, Cameron Brannagan and Joao Carlos Teixeira were regular features, this season Klopp has shown an admirable faith in youth in the FA Cup.

This has seen him continuing his positive work with the likes of Alexander-Arnold, Ejaria and Woodburn, with the trio emerging from the academy to take up prominent roles.

Against Argyle on Wednesday night, it was Alexander-Arnold who stood out as Liverpool’s best player, showing determination, intelligence and endurance in a vital defensive display at right-back, building on his impressive full Premier League debut at Old Trafford.

Alongside him, Gomez continued his seamless transition back into first-team football, following 14 months out of the picture due to an ACL injury, retaining his speed, strength and precision at centre-back.

Outshining their older team-mates, both Ejaria and Woodburn showcased a composure and finesse that allowed them to find time and space within a stubborn defensive setup from the home side.

The former completed a remarkable 96.7 percent of his attempted passes, with only Kevin Stewart (96) finding a Liverpool shirt on more occasions (91). While it is clear that both Wilson and Ojo have more work to do, both were positive in their second-half displays at Home Park—and both still 19, they can offer useful alternatives in the future.

That Klopp had six teenagers on the pitch at full-time is a major positive, magnified by their ability to hold out for victory against a determined Argyle side pushing for a landmark result.

But by the same token, the fact Wilson and Ojo replaced Philippe Coutinho and Daniel Sturridge without any real detriment to Liverpool’s fluency is telling.

Wednesday’s victory over Plymouth was remarkable due to Lucas Leiva hitting his first goal since 2010, but the oldest player on the pitch was not representative of the malaise of his fellow first-team fixtures.

The marquee name in Klopp’s starting lineup, Coutinho made his first start since November, but as such was clearly still finding sharpness in his floating role.

Only two outfield players to start the clash tallied a lower passing accuracy than the Brazilian, who at times looked at odds with the rhythm his youthful colleagues had been building.

Alongside Coutinho in attack, both Sturridge and Divock Origi really struggled to get going, and while this can be attributed to Argyle’s low block, the fact remains that they are operating three tiers above their Devonshire opposition.

Between them, Sturridge and Origi mustered eight shots on Luke McCormick’s goal, but failed to find the back of the net, with the latter’s tame penalty miss in the dying stages characteristic of their failure.

Origi (eight), Sturridge (three), Adam Lallana (five) and Roberto Firmino (five) are all on a disappointing run of games without scoring, which is particularly worrying given this comes at a time when Liverpool need reliable cover for Sadio Mane.

This is a struggle spread throughout the squad, with Wednesday night being Liverpool’s first win of 2017, drawing with Sunderland, Argyle and United already in January, as well as losing at Southampton in the League Cup.

These aren’t top-level opponents, either, with Liverpool suffering a slump at one of the worst possible stages of the season.

The youngsters picked up the slack at Home Park, but Klopp’s decision to omit Dejan Lovren, James Milner, Jordan Henderson, Emre Can, Georginio Wijnaldum, Lallana and Firmino, as well as substituting both Coutinho and Sturridge in the second half, was significant.

The German is clearly planning to rely on his senior players for a key period this January. Having played once at home in the first five games of 2017, Liverpool now face four consecutive Anfield outings in just 10 days as January reaches a critical period in the Premier League, FA Cup and League Cup.

Beginning with Saturday’s league clash with Swansea City, the Reds then host Southampton in the second leg of the League Cup semi-final, before an FA Cup fourth-round tie against Wolves the following Saturday morning.

The month culminates in a hugely important encounter with Chelsea on Merseyside, and having already won 2-1 at Stamford Bridge this season, another three points against the Blues is vital.

This four-game stretch could prove the difference between success in May and another deflating end to the campaign.

You can expect that fringe players and youngsters will make up the team to face Wolves, leaving first choice players fresh for the visit of Chelsea the following Tuesday.

Come February, Liverpool could either be right in the title race, secured their place in one final and be three games away from another, or be out of both the cups and clawing back to fight for a top-four finish.

While it may seem an overdramatic assessment, Liverpool’s season is teetering on the results picked up over those 10 days.

And to ensure they emerge successful, Klopp needs his more experienced players to dig in and return to the form that made them such convincing prospect in the first half of the season. Most can be expected to play against Swansea, Southampton and Chelsea, given their relative importance and Klopp’s approach to both competitions so far, while he can filter youth back into the frame for the clash with Wolves, which could prove more straightforward than Argyle.

The return of Coutinho will be central to this resurgence, with the 24-year-old’s creativity and speed of mind allowing the likes of Lallana and Firmino to express themselves more freely.

But as Simon Mignolet attested following Sunday’s 1-1 draw with United, “it is always better to have a good unit than being reliant on one or two players.”

Liverpool can’t pin all their hopes on Coutinho, just as they couldn’t with Mane, and Klopp needs all his senior stars to recapture their form during a make-or-break end to the month.