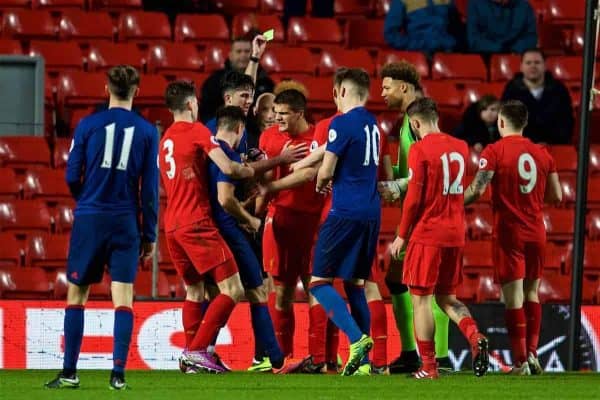 Liverpool U23s were dealt a cruel blow as Man United scored an injury time winner to take a win at Anfield.

A third of the Kop was full as Reds fans turned out at Anfield for part two of Liverpool versus Manchester United.

This was a chance for the under-23s to go one better than the first team and claim a victory against their rivals from down the road, after the senior sides drew 1-1 at Old Trafford on Sunday.

Matty Virtue took the captain’s armband in the absence of usual skipper Harry Wilson who trained with the first team today. The Welshman could feature in the first team squad when they travel to Plymouth for their FA Cup Third Round replay on Wednesday evening.

The first round of applause from the Kop came when Jordan Williams took out United midfielder Matthew Willock with a mistimed tackle, showing that the animosity of this fixture even trickles down to this level.

With Mamadou Sakho and Tiago Ilori seeking moves this January, U23s coach Mike Garrity turned to Tom Brewitt and Nathan Phillips, the latter signed from Bolton academy at the start of the 2016/17 season.

Phillips provided a commanding aerial presence at the back and was rarely beaten in this type of duel, but he also showed good composure on the ball, covering calmly on the occasions his centre back partner was caught out.

Brewitt blocked well from a Willock shot as United gained a slight physical edge in the opening stages.

Though Liverpool came into the game towards the end of the first half, the best they could muster in terms of a goal threat was a Sam Hart effort which went high into the Anfield Road end. It even missed the 60 away supporters seated behind the goal.

The second period began in a livelier fashion. Brooks Lennon had a shot blocked after cutting inside from the left, before Jack Dunn blazed the rebound high in wide. Within minutes Liverpool had let off twice as many shots as they’d done in the first half.

The Kop crowd responded in kind as the young Reds attacked their end, cheering United ‘keeper Joel Pereira as he sliced a clearance out of play.

Another chance came when substitute Kane Lewis intercepted a clearance and set up Lennon, but the American scuffed his shot wide.

Lennon and Lewis worked well together down the right, and they looked like the most potent attacking threat in general play for the Reds.

Other chances came from set pieces. Brewitt did well to meet a Dunn corner, but his well won header was straight at Pereira. Virtue had an effort saved shortly after, again from a corner, while Shamal George was eventually tested in Liverpool’s goal when Callum Gribbin stung his hands with a well struck effort.

Pereira’s goal kicks were still drawing the biggest noise from the Kop, but they looked worried when Brewitt gave away a free kick in a dangerous area at the other end, but Sean Goss’s free kick fizzed over.

One of the moments of the match came shortly after when Lewis fouled Gribbin in the box leaving referee Wayne Barratt no choice but to point to the spot. Goss stepped up to take the kick, and it was well taken with his left foot, but George produced a brilliant save to keep the scores at 0-0.

Liverpool were having much of the ball but looked susceptible to the counter-attack, especially down their right side. In possession, Corey Whelan was linking up well with Virtue following the former’s move into midfield from right back at half time, but the team lacked decisiveness in the final third.

One of the best forward passes came from Phillips who found Virtue with a drilled through ball which took out several players, but Axel Tuanzebe recovered to halt the Liverpool captain.

Liverpool hearts were in mouths as United won a header from a corner in the dying minutes, but Hart was on hand to clear off the line.

However, with seconds remaining United had another set-piece chance and this time they made no mistake, with Willock heading in a Goss free kick to win the game with the final throw of the dice.

It was a cruel blow for Liverpool, but their sloppiness towards the end of the game, giving away needless fouls and getting caught on the break contributed to their own downfall and invited the all too familiar late goal from their rivals.