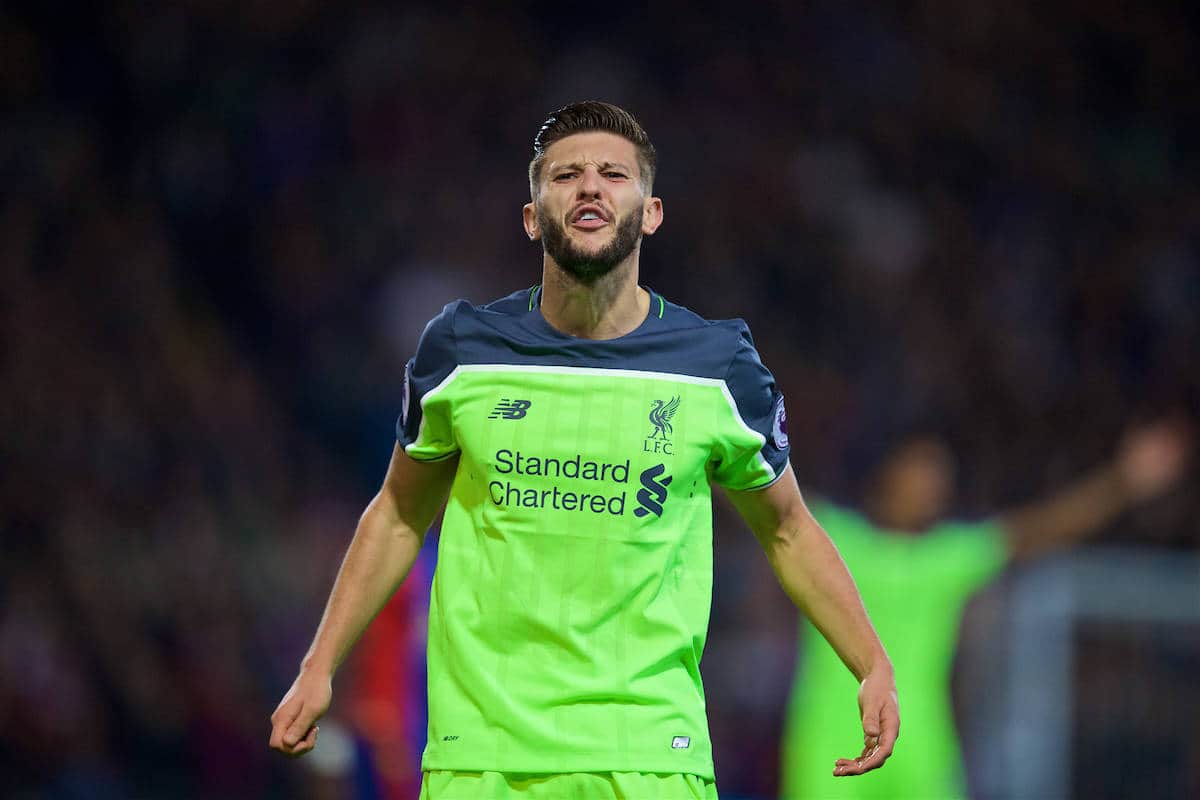 Could Sadio Mane’s absence affect the form of Adam Lallana, and have a detrimental knock-on effect in other parts of Jurgen Klopp‘s Liverpool?

It took just one game for a Mane-shaped void to have a big effect on a Liverpool performance.

Not counting the FA Cup third-round tie against Plymouth Argyle, where Klopp picked the best from his reserves, Wednesday night’s 1-0 loss at Southampton in the League Cup semi-finals was the first real test for a Mane-less Reds, and they failed.

The 24-year-old was a revelation when he joined from the south-coast club for £30 million, and was one of Liverpool’s best players in the early part of the season.

As the campaign has progressed his scintillating form has given way to some steady team performances, and even when the Senegal international isn’t playing at the peak of his powers he still offers an important dimension to the side.

This dimension will be missed while he’s in Gabon, where he’ll be trying to help his country to their first Africa Cup of Nations title.

And Klopp has commented numerous times that the team don’t have anyone else like Mane.

“There is no player exactly like Sadio,” he said before the trip to St. Mary’s. “That is not perfect but it is not a problem. We will find solutions.”

“There are still options. We will try to figure out which one works best.” Against Southampton, the manager abandoned the attacking width altogether, with only full-backs Nathaniel Clyne and James Milner taking up positions in wide areas.

Lallana and Roberto Firmino played behind Daniel Sturridge in what turned out to be a 4-3-2-1 formation: The team needed to take advantage of any breakaways they had against an opposition defence whose numbers retreated quickly, but Lallana was slow to release the ball on these occasions.

The England midfielder has received plenty of praise in recent months, and rightly so.

He’s consistently been one of the team’s best players, contributing seven goals and seven assists in the league and regularly being among the best players on the park.

His game has improved so much that recent transfer rumours linking him with moves to Barcelona, Juventus and Paris Saint-Germain don’t seem as farfetched as they might have done a year ago. But the Southampton defeat was a return to the Lallana of old. He showed plenty of neat touches as he danced his way around the pitch, but the speed, accuracy and boldness of his decisions on the ball were missing.

The reason for this could have been partly due to the absence of Mane, or a player like him, attacking the back line down the right channel.

Having him lurking on that side of the pitch stretches the opposition, and he’ll pull their defenders out wide before cutting inside to become the focal point of the attack.

This type of movement creates space for Lallana, not just to move into, but also to pass into as he advances into the attacking-midfield role on the right, usually in a hole left by Mane.

Now the only hole left is the one which he used to occupy in the attacking third, which covers a good portion of the opposition area as well as the right flank.

The graphic below, taken from WhoScored, shows the touches of the ball made by Liverpool players against Southampton. The pitch is packed with the blue dots which indicate a touch of the ball by a player in that area, all except the far-right corner and central areas—the parts of the pitch usually patrolled by Mane. Lallana’s troubles had a knock-on effect on Georginio Wijnaldum, who couldn’t get into the game at all in the first half and was taken off on the hour mark having made no impact.

The reason for this could have been that Lallana was stood on his toes for much of the game. The space which Wijnaldum will often look to burst into from midfield was occupied by his team-mate in this narrow formation, and resulted in the Dutchman playing a useless role which was ineffective in both defence and attack.

When Liverpool played a 4-3-2-1 last season they had Milner bombing on from his position on the right of the midfield three to become an auxiliary right winger. To solve the current problem the team need to use Wijnaldum in a similar manner, or remove one of him or Lallana from that part of the pitch completely.

For Wijnaldum and Lallana to play at their best they need space, and they need one another as well as their team-mates to create this. They can beat players in close quarters, but once they have they need room to run into both on and off the ball.

Narrow formations are designed to cause the opposition problems by overloading the middle of the park, but to be effective they require highly technical players in midfield.

Liverpool’s sloppiness made things difficult for themselves and easier for the Southampton defence.

Towards the end of the game Klopp switched to a back three, pushing Clyne and Milner forward to the wings, but it was too little, too unrehearsed, too late.

Heading into an important Premier League fixture against Manchester United, the Reds will have to make changes to their system if they’re to trouble another team who like to defend in numbers.

For Lallana it’s a game where he’ll need to live up to his recent hype—and prove that he can still be the team’s best player, even without his wingman.