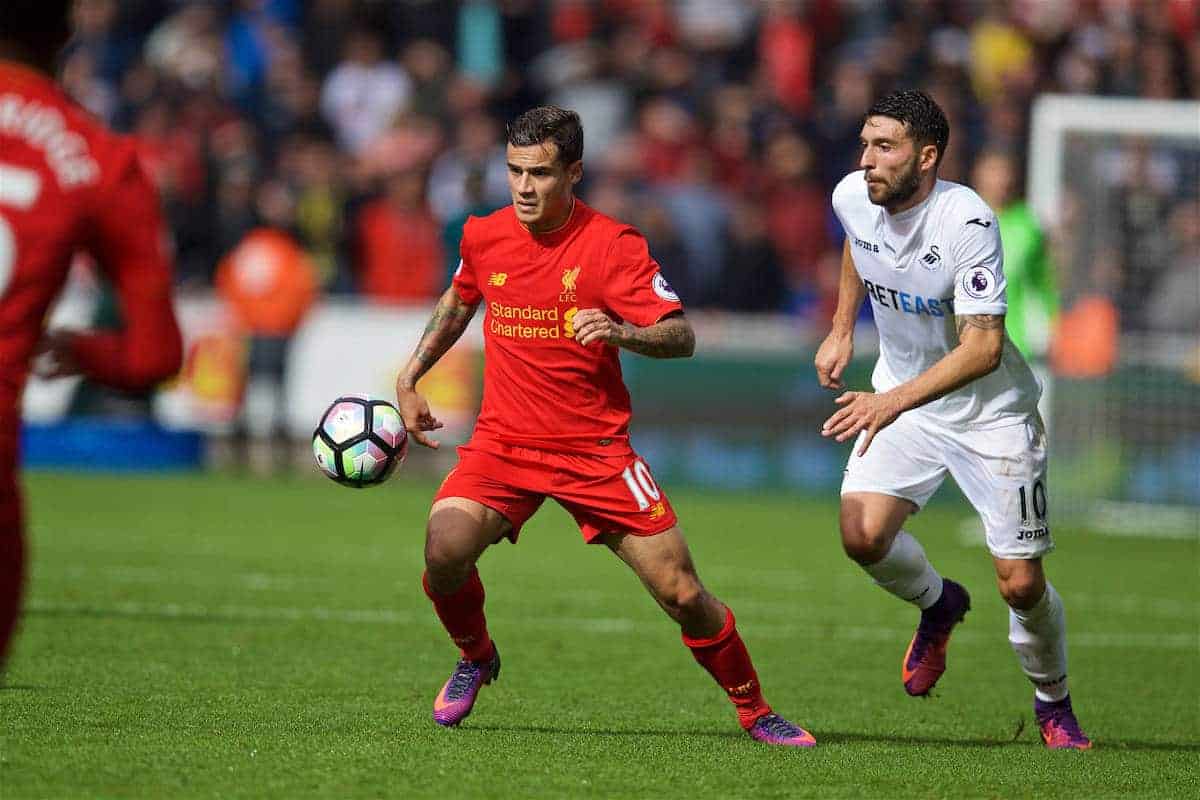 Liverpool welcome relegation-threatened Swansea City to Anfield this weekend, as the Reds look to remain firmly in the Premier League title race.

It may not feel like it, but Anfield is still waiting to host its first Premier League game of the year.

Man City were the last league visitors, on New Year’s Eve, but a struggling Swansea team come to town on Saturday.

The arrival of Paul Clement has done little to alter the negative mood in south Wales, with the Swans bottom of the table and leaking goals at a rapid rate.

Liverpool should see this as a glorious chance to hit their stride again, having been a little flat over the last few weeks.

Swansea’s defence is there for the taking, and with Philippe Coutinho fit again, we will hopefully see Jurgen Klopp‘s side return to the level they were at around September and October.

Anything other than three points for the hosts would be an almighty blow to their title hopes, but they must not take their opponents too lightly.

A resounding victory, with goals and fluency in abundance, would be just what the doctor ordered, as Liverpool look to close the gap on Chelsea to four points. We had a chat with Swansea supporter Andrew Gwilym (@awgwilym) to get his thoughts on the Swans’ struggles and Liverpool’s season to date—here’s a snippet of the interview.

Who have been Swansea’s three best players this season?

Given the season they have had, it is not an easy task to pick out three players who have stood out.

Gylfi Sigurdsson is our best player, in terms of quality, and his five goals and six assists speak to his importance in this relegation fight. He has not been at his best recently but he is going to be key if Swansea are to stay up.

Fernando Llorente had a slow start to life in south Wales, but he has started to show some of his class and finishing ability sporadically over the last couple of months.

The rest have been much of a muchness.

What about Liverpool in 2016/17—what have you made of their progress under Jurgen Klopp?

Liverpool have made tremendous strides since Jurgen Klopp took over from Brendan Rodgers. The thing that stands out for me is their fitness and intensity.

They are capable of playing the game at a tremendous tempo—with and without the ball—which wears sides down or proves too much for them to handle. The movement and speed of their forward line is something to behold in full flight.

Read the interview with Andrew in full HERE.

Klopp is slowly starting to get his key players back—something that is essential in their quest for the league title.

Coutinho played an hour at Plymouth Argyle on Wednesday, and Liverpool’s talisman should be fit enough to start against Swansea.

That will allow Klopp to play Roberto Firmino in the central role he craves, with Divock Origi and Daniel Sturridge both potentially starting on the substitutes’ bench.

Alternatively, the Liverpool manager could start one of them in the front three, with Adam Lallana remaining in his preferred midfield role. Emre Can would then be expected to make way.

Joel Matip has been cleared to take part, but didn’t train with an eye to start, so Dejan Lovren and Ragnar Klavan could again be partnered at centre-back.

Nathaniel Clyne could return, having missed the games with Man United and Plymouth, but Trent Alexander-Arnold will be waiting in the wings if the England international is deemed unfit.

Meanwhile, Jordan Henderson is expected to shake off a heel problem.

Clement has no short-term injury worries of note, with Neil Taylor, Modou Barrow, Jefferson Montero and Luciano Narsingh all out for the foreseeable future. “Roberto, of course, had a few moments where he lost this ball or this ball, maybe didn’t score in this situation, or whatever. But he doesn’t depend on any other player.

“It helps the whole team when Phil is in, 100 percent. But they like each other, of course, and everybody can benefit from Phil’s skills, and the other way round it’s the same.

“It’s good for all of us that he’s back, but Roberto is still in good shape.”

The match is live on BT Sport 1, with coverage getting underway at midday. Kickoff is at 12:30pm.

Alternatively, we have our matchday live blog running from 11:45am, with minute-by-minute updates brought to you by Ben Twelves.