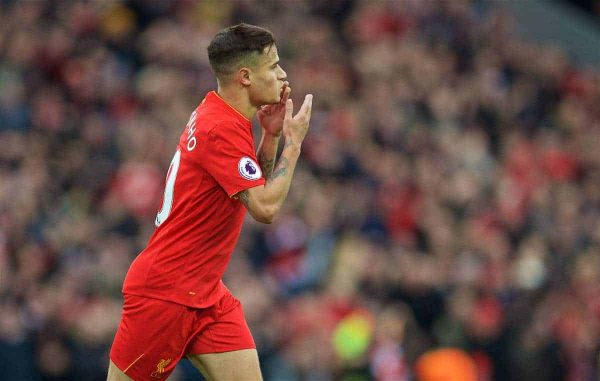 Coutinho to start as Reds to return to full strength – Predicting Liverpool’s XI vs. Swansea

Jurgen Klopp will restore his side to full strength for Saturday’s clash with Swansea City, but is waiting on the availability of some key defenders.

The Reds kick off a season-shaping 10 days with the first of four successive games at Anfield against bottom-of-the-league Swansea.

Klopp’s side secured their first win of 2017 against Plymouth Argyle in the FA Cup on Wednesday, and they must back that up with a second in a row against the Premier League’s leakiest defence, with the chance to reduce the gap—even if only temporary—between them and leaders Chelsea.

Klopp is set to restore Liverpool to their strongest lineup for a must-win game, after handing the majority of first-team picks a night off from action at Home Park in midweek.

But whether that includes defenders Nathaniel Clyne and Joel Matip remains to be seen.

Liverpool’s XI vs. the Swans

Klopp will return Liverpool to their strongest possible state on Saturday, and the German’s selection almost picks itself when taking injuries, absences and form into consideration.

The Reds boss is likely to monitor Clyne’s fitness in the buildup after two games out, and if the first-choice right-back is fit to take part, he will return to his usual role.

Clyne’s comeback could come in an otherwise unchanged back four from the Reds’ last league outing, as though Matip has been cleared to play, he didn’t train as a starter, and therefore Lovren and Klavan would continue at centre-back.

The fortunes of Liverpool’s out-of-sorts strikers means the midfield is a straightforward selection, with rested trio Henderson, Can and Wijnaldum poised to form a refreshed centre.

Indeed, that Sturridge and Origi struggled again during extended outings in the narrow cup success at Plymouth makes both extremely unlikely to start at Anfield.

Firmino, therefore, seems almost nailed on to lead a free-roaming front three flanked by Coutinho and Lallana, which would see the Reds look like this:

Klopp’s selection does hinge on the availability of certain key defenders, and that this is the case could force the boss to adjust his best-laid plans.

If Clyne is forced to miss out once more with his rib injury, Alexander-Arnold could deputise again for his third start in a week at right-back.

And if Klopp does opt to field Matip, this would likely come alongside Lovren, with Klavan dropping to the bench.

The only two potential switches are likely to come in defence, with little alternative in midfield and with Lallana, Coutinho and Firmino currently providing the Reds’ most dangerous attack.

Liverpool’s XI would look like this come kickoff time at Anfield:

Liverpool have turned Anfield into a fortress this season, and it’s vital this continues and any slip-ups are avoided on an afternoon they look make ground on Chelsea as the first title hopeful in action this weekend.