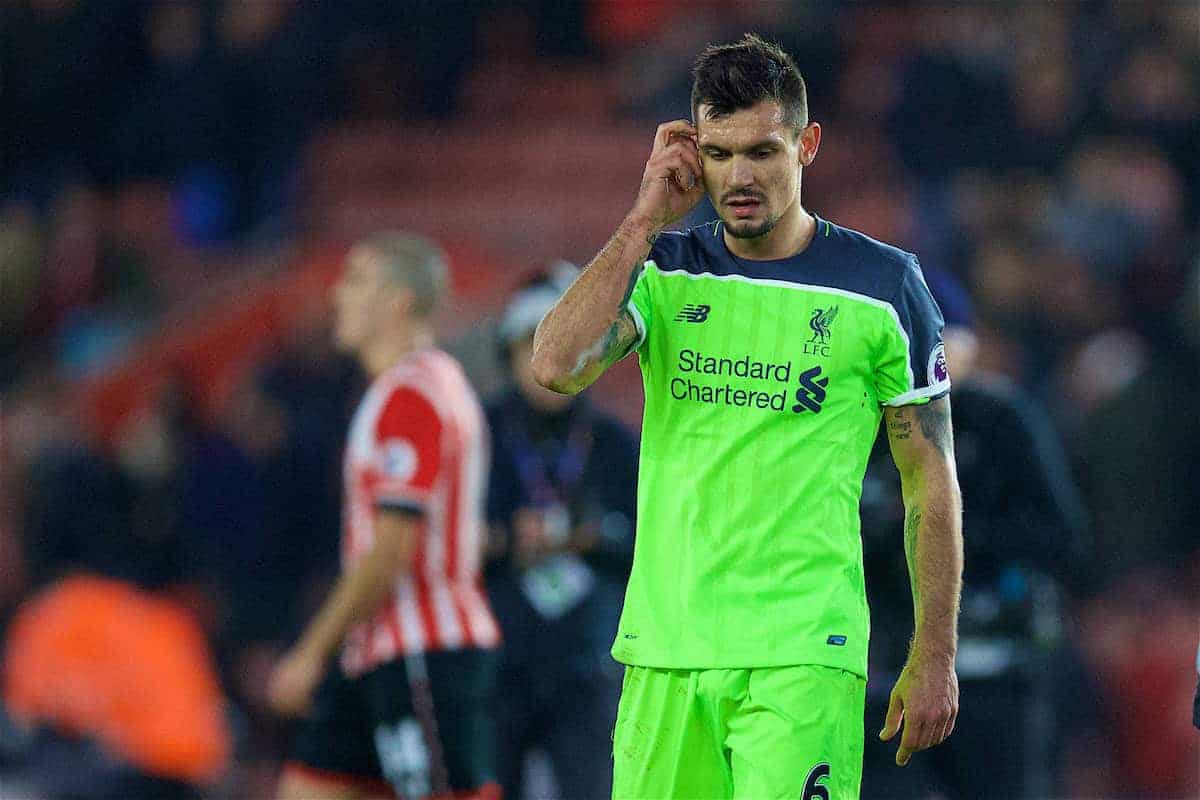 Liverpool slumped to defeat against Southampton as some poor individual performances made the loss more difficult to take.

A one-on-one save from Nathan Redmond will have boosted his confidence early on, but just a minute later he was let down by his defence and this time he couldn’t prevent the winger from opening the scoring.

Punched a corner clear with authority in the first half when he also had plenty of catches to make, and balls to clear.

Made a great reaction save, from Redmond again, towards the end of the half to keep the score at 0-0.

Wasn’t troubled as much in the second period but still did a good job sweeping up behind his flailing defence.

As the team’s provider of width on the right he needed to be on top of his game.

It was an extra responsibility for Clyne who can normally get away with merely being solid, but here he had to produce in the attacking third and he failed to do so.

Also struggled defensively on occasions, but wasn’t helped by the centre-backs inside him, and you can’t pin the blame solely on him for the goal as Sky’s studio analyst Matt Le Tissier did at half time.

Suffered a hairy moment early on with Tadic in close quarters, but Karius was able to smother the lose ball.

Very pro-active, and was often too proactive as he left the man or area he should be marking to challenge elsewhere.

This led to the chance for Redmond shortly before the goal, as Clyne was forced to cover inside leaving the winger free.

It was a return to the errors of old, as it was for many. Cleared the ball off the line with some help from the crossbar late on.

Allowed Southampton to take the lead when he slung a foot at the ball and missed.

In previous games he had been making a case to be the best partner for Joel Matip when the Cameroonian returns, but here he took several steps back.

Looked shaky after his error, but came into the game during the latter stages when he was also helping to build attacks as part of a back three.

Looked like a midfielder playing out of position at left-back again. Also appears not to be 100% fit.

Had no idea where Redmond was when the winger almost doubled his side’s lead before half time, which is strange, because replays showed him taking a look over his shoulder shortly before the chance.

Was sloppy in attack too, and when he did get into dangerous positions out wide on the left he was too predictable. A yard, or more, off the pace.

The Brazilian has recently said that he thinks centre back is his best position, but here he was moved back into midfield.

On this showing he might have been better in the back line — he certainly couldn’t have been worse than the players who were there — and it would have reduced the chances of him being turned, as he is so easily by opposition players.

Was playing piggy in the middle for much of the first half as the game passed him by.

His second half had the fewest touches of the three midfielders before he was put out of his misery and replaced by Coutinho with an hour gone.

One of the players responsible for finding a way through a packed Southampton defence, and was the only one who managed to do so in the first half.

His chipped pass found Lallana in the box, which led to Firmino’s chance. Desperately out of form at present.

Against a defence like this the ball needs to be moved quickly when the team are breaking, and too often it slowed down at Lallana.

Headed back to Firmino to create what was the side’s best chance of the game in the first half, but other than this incident as an auxiliary target man he was unable to break the opposition down.

He returned to doing many of the things he was criticised for prior to his excellent form under Klopp.

Had a left-footed effort from Lallana’s knock-down saved by Fraser Forster early on.

At his best Firmino is the complete forward, filling every role from target-man to poacher, but here he couldn’t find any role to excel in.

Showed the usual hard work in defence, but his failure to keep the ball in play when in a dangerous area in the first half summed his game up.

Didn’t get any service whatsoever in the first half, and only saw anything of the ball when he dropped into midfield to pick it up himself.

Had more of the ball in the second but was frustrated as he regularly lost the ball, usually falling down and appealing in vain for a free-kick or penalty in the process.

Added a much needed forward threat, returning to his position on the left of the attack.

Within minutes of coming on he was playing some good forward passes and dribbling through the opposition defence.

Tried one of his long range shots later in the game but it sailed over the bar.

Couldn’t make an impact on the game in the few chances he had to do so.

Klopp picked a team which few will have had problems with given the players not yet fit after injury, and those still out.

However, his narrow formation with Sturridge as the only attacker failed to compensate for the loss of Sadio Mane.

The midfield often appeared to be in each other’s way when really they should have been stretching the defence across the pitch.

Changed to a back three later in the game, which meant there were two forwards, but the changes were too late and seemed more like experiments than solutions.